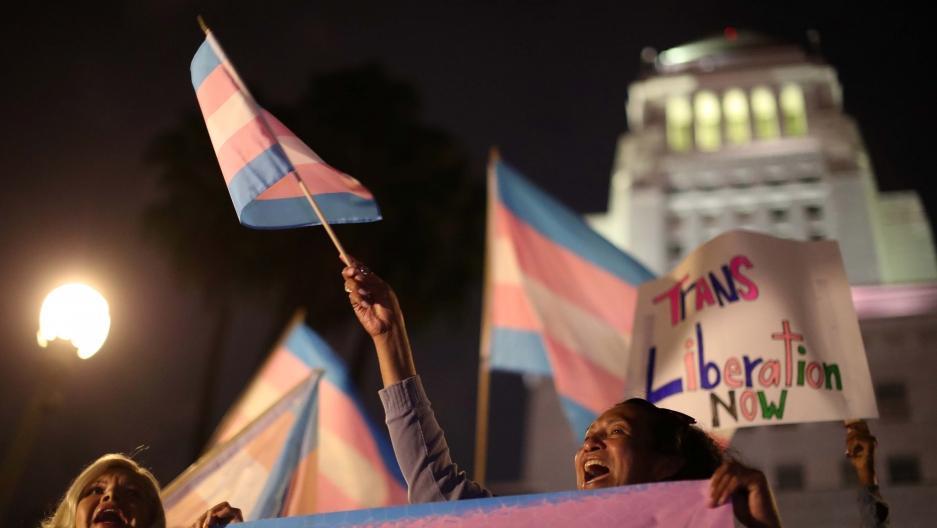 People rally for transgender rights in Los Angeles, Oct. 22, 2018. On April 3, 2019, Brunei implemented a law that would sanction death by stoning for convictions of same-sex intercourse.

Brunei, a former British protectorate, has stated it will roll out new Sharia law punishments from April 3 that include death by stoning or whipping for sodomy, adultery, or rape.

Many, including Oscar-winning actor George Clooney, have called for a boycott of luxury hotels owned by Brunei, because of the Southeast Asian nation's plans to impose the death penalty for people having gay sex or committing adultery.

The Brunei Investment Company owns nine hotels in the United States and Europe, including the Beverly Hills Hotel, The Dorchester in London, and the Plaza Athénée in Paris.

Karina Samala is the chair of the Transgender Advisory Council in Los Angeles. She is among those calling for boycotts against hotels owned by the sultan of Brunei.

“As a Filipino American transgender woman and a member of the LGBTQ community, I was really horrified by the decision of the Sultan of Brunei stoning to death of adults engaging in consensual, same-sex relations,” she said.

Samala spoke to The World about the impact the law is having on the LGBTQ community.

Marco Werman: Well, the Empire of Brunei owns the Beverly Hills Hotel and the Hotel Bel-Air in LA and seven others around the world within the Dorchester group. How is this actually an effective way to protest the boycott? I mean, even George Clooney admits that Brunei, being a monarchy, this pressure probably won't amount to much.

Karina Samala: Yeah, especially since they are a very rich oil country. The boycott is just kind of for us to really boycott the sultan's business interest so that they are aware that we are not pleased with what's going on back there.

Homosexuality, as you know, has been illegal for 10 years in Brunei. Sharia law officially came into effect in 2014, and at the time, all sorts of celebrities boycotted the Beverly Hills Hotel. That was five years ago. So, what's been going on with the activism against Brunei since then?

Yeah, it started 2013, 2014 when it was implemented and came into effect this year. At that time, we raised our concern. Now, this is a final straw to it — this finalization and being a law now.

Karina, in Los Angeles, you're known as 'mother to the LGBTQ community' in LA. How did you earn that title?

I currently sit on 10 boards. I work with the police department doing policies regarding, you know, interaction with our community policies. Also, with the city and giving advice to city council members and the mayor on any issues pertaining to our community. So, a lot of my community members come up to me for help. It doesn't matter how old they are, they still call me mother and they even come to me and ask permission sometimes, “Can I also be your daughter? Can I also call you mother?” You know, because I've always been there to help them and guide them.

As for this boycott of the Brunei hotels, there are all sorts of American businesses that have deep investments from foreign sovereign funds. I think of the major uproar after the murder of journalist Jamal Khashoggi when the full extent of Saudi Arabia's investments were revealed in the US. I mean, it is fine to protest, but how do you undo the deeper connections between investment in the US and global tyranny?

We're standing up, and I encourage a lot of people to really stand up and condemn this. We are supporting to really boycotting them so that we can at least hold our business interests here in our country.