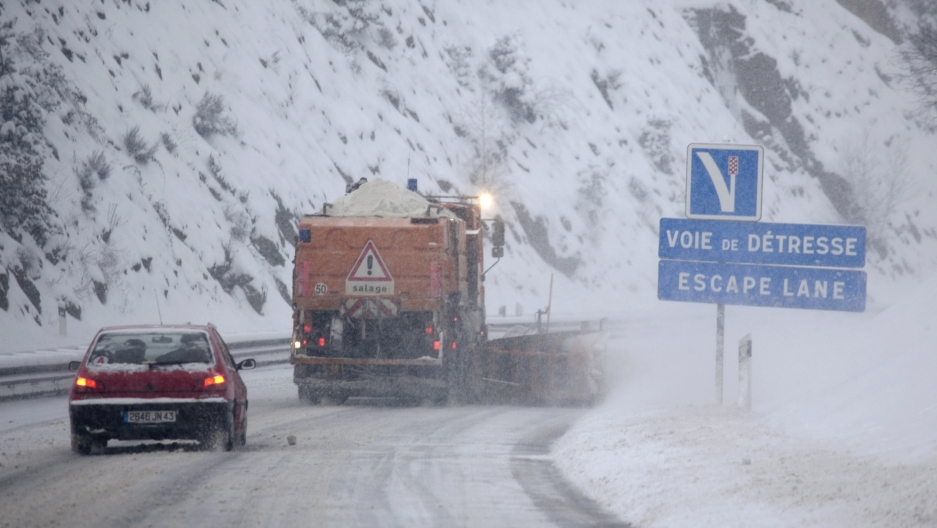 A car follows a salt spreader on a snowy road as winter weather continues to hit France, near Firminy, central France.

Bacteria, which have been working for millennia as nature’s stonemasons, could soon be enlisted to help neutralize the destructive effects of road salt.

According to the Transportation Research Board, it takes about 10 million tons of road salt to keep roads safely navigable in the winter. And while it’s certainly an effective method for staving off snow and ice, around this time of year, we start to see the toll it takes on our infrastructure in the form of cracks, potholes and bumps.

It turns out, those bumps aren’t just the inevitable annoyances that come with wear and tear — they’re actually caused by a chemical that forms when road salt reacts with the surface of roads, bridges and sidewalks that are made from white-gray concrete.

As a civil materials engineer at Drexel University, I spend my time teaching and developing advanced materials that we can use to build more robust roads, bridges, buildings and infrastructure.

The chemical causing the havoc is called calcium oxychloride — CAOXY, in chemistry shorthand — and it forms when a common type of road salt, calcium chloride, reacts with the calcium hydroxide that is an ingredient in concrete.

CAOXY is a destructive component. When it forms inside concrete, it expands — creating internal distress and cracks that are then amplified by the chiseling effect of the freeze-thaw cycle.

According to the US Federal Highway Association, winter road maintenance accounts for roughly 20 percent of state department of transportation maintenance budgets, through spending more than $2.3 billion on snow and ice control. This does not include the billions of dollars needed to repair infrastructure damage caused by snow, ice and deicing salts, fixing potholes, patching and reinforcing roads and dealing with the corrosion that salt causes on the metal parts of vehicles. The annual direct losses caused by corrosion on US highway bridges are estimated at $276 billion, approximately 3.1 percent of the nation’s gross domestic product.

While research is underway to develop new types of concrete, such as self-heating concrete, that can melt snow and ice without the need for road salt, it might be more feasible to treat roads with something that would still allow the salt to do its job while counteracting its negative side effects by preventing the formation of CAOXY.

My multidisciplinary group at Drexel University, which includes civil, environmental and materials engineers, decided that any antidote for CAOXY-related damage would need to prevent the chemical reaction that forms it. But curtailing the reaction is tricky because it can occur at temperatures above freezing. This means that CAOXY can start forming almost as soon as the salt hits the road.

One of the best ways to block the reaction from happening is to make sure there aren’t enough ingredients for it. So, we wanted to create another chemical reaction that could use up the calcium in road salt before it reacted to form CAOXY.

Nature provided the perfect solution in the form of some talented bacteria.

On the other side of our lab, students were examining bacteria called Sporosarcina pasteurii to understand how they performed their magic. The bacteria, which are commonly found in the soil, have the unique ability to convert nutrients and calcium into calcium carbonate or calcite — also known as limestone, a common stone in Earth’s crust. This bacterium, S. pasteurii, is credited with depositing limestone as a binder (or glue), aiding the formation of coral reefs and helping to bind and stabilize soil.

But the S. pasteurii findings that interested my colleagues and me were discovered about 15 years ago in Europe. This research showed how bacteria like S. pasteurii could make their own sort of concrete, a biomortar, that could be used to repair damaged marble surfaces, such as sculptures or historical buildings.

Through their metabolism of the nutrients, the bacteria produce an enzyme that acts as a catalyst for calcite formation. The process also increases the alkaline nature of the surrounding environment, which also enables the reaction.

Our group was hoping to put the bacteria to work repairing cracks in concrete, most of which has limestone as its main ingredient. The breakthrough came when we noticed one of the primary ingredients S. pasteurii needed to make its limestone is calcium.

Could the little bacterial masons help us thwart CAOXY?

Where the S. pasteurii meets the road

We put our idea to the test using samples of ordinary Portland cement, the kind used to build roads, bridges and sidewalks. In addition to a control sample that was made with no bacteria, we treated one sample in the lab with S. pasteurii and nutrient solution.

Then, we exposed our samples to calcium chloride solution at varying temperatures, to simulate the winter environment in which a typical road salt-concrete interaction occurs.

When calcium hydroxide (from the concrete) mixes with the road salt calcium chloride in the presence of bacteria, the microbes produce limestone which patches the road.

By measuring temperature changes indicative of CAOXY formation, measuring CAOXY amount and monitoring the acoustics of the samples with small sensitive microphones for the sounds of cracking, we saw that the bacteria-treated samples were left unscathed.

And the S. pasteurii actually converted some of the road salt into calcite that helped to seal up the micropores that are precursors to cracks and potholes.

So, can using bacteria before the salt assault really save us from road damage? I think so.

S. pasteurii are a particularly hardy type of harmless bacteria that can be found in soil. They can form spores in order to survive in a wide range of temperatures and high- or low-acidity environments. This means they may lie dormant in the off-season and spring into action with the first road salting of the winter. And more importantly, the calcium carbonate they form seems to be harmless to their immediate ecosystem – unlike road salt, which is known to affect nearby aquatic environments by the end of the season.

Of course, more work is needed to fully understand the interactions of S. pasteurii with deicing salt and its effect on concrete performance. My colleagues and I don’t yet know how quickly bacteria perform this chemical reaction, and we are working on promising ways for how we would add the bacteria to the roads in a real-world situation. But this is a path worth pursuing, because it’s unlikely we’ll be able to kick our addiction to road salt any time soon.

Yaghoob Farnam is an assistant professor of civil engineering at Drexel University.