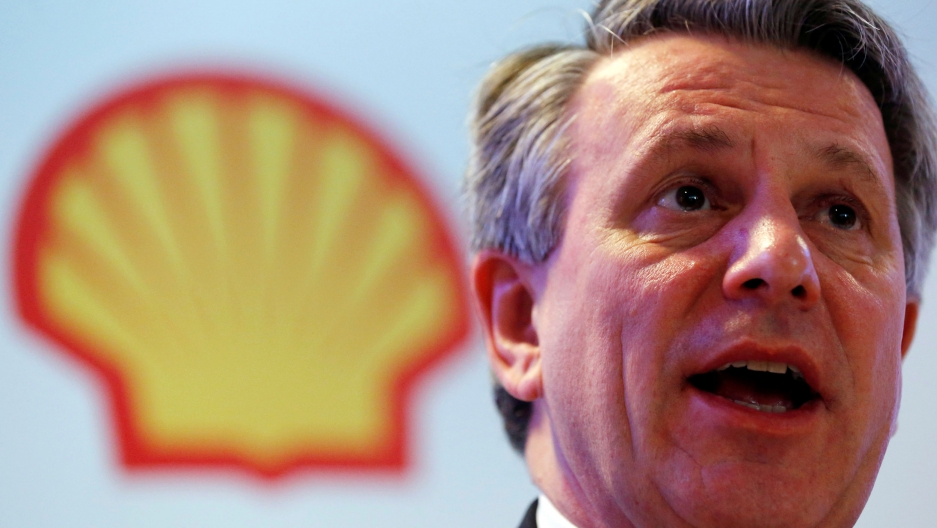 Ben van Beurden, chief executive of Royal Dutch Shell, speaks during a news conference in Rio de Janeiro, Brazil, on Feb. 15, 2016. Shell Oil announced it would no longer belong to a lobbying group that does not support the Paris climate agreement.

Royal Dutch Shell PLC on Tuesday became the first major oil and gas company to announce plans to leave a leading US refining lobby due to disagreement on climate policies, citing its support for the goals of the Paris climate agreement.

In its first review of its association with 19 key industry groups, Shell said it had found "material misalignment" over climate policy with the American Fuel & Petrochemical Manufacturers, and would quit the body in 2020.

The review is part of Shell's drive to increase transparency and show investors it is in line with the 2015 Paris climate agreement's goals to limit global warming by reducing carbon emissions to a net zero by the end of the century.

It is the latest sign of how investor pressure on oil companies, particularly in Europe, is leading to changes in their behavior around climate. Last year, Shell caved in to investor pressure over climate change, setting out plans to introduce industry-leading carbon emissions targets linked to executive pay.

Its chief executive, Ben van Beurden, has since repeatedly urged oil and gas producers to take action over climate and pollution, staking out a more radical position than the heads of other major oil companies.

"The need for urgent action in response to climate change has become ever more obvious since the signing of the Paris Agreement in 2015. As a result, society's expectations in this area have changed, and Shell's views have also evolved," van Beurden said in the report.

Mindy Lubber is the CEO of the corporate sustainability organization, Ceres. Lubber spoke with The World's Marco Werman about Shell's announcement.

Marco Werman: Why does it matter that Shell is leaving this organization?

Mindy Lubber: Well it matters because if a company steps up and says they're going to act on climate and they're going to take steps to deal with getting their company in line with the Paris Agreement, they can't honestly at the same time be supporting trade associations who are trying to kill that agreement. It is simply not responsible or not honest. I mean, Shell agreed to three things a couple of months ago in a series of negotiations with investors, many of our members and others. They agreed to set very clear and specific goals on how to bring their carbon footprint down. No. 2, they said they're going to hold their executives accountable, their top thousand executives, to meeting those climate goals. No. 3, they're going to align their policy positions with that of their trade associations and Shell gets a good deal of credit for being the first fossil fuel company to stand up and say, "We are pulling out of one of the trade associations we're part of because they're advocating for the opposite of what we believe in on climate."

If this is about the goals of the Paris agreement, it seems Shell's going to have to change a lot more than who does its bidding in Washington. How does this move fit into Shell's broader strategy to change what they do and how they do it?

Well, that's precisely what needs to happen. The fossil fuel industry is going to have to look substantially different. And so what the investors were saying to Shell, in many, many of our discussions and meetings, is you need to look at the future of this company, you need to set goals for — I would argue — radically reducing your emissions, and that might be starting to change your product mix. It may be that some of these oil and gas companies need to develop more of a renewables part of their business. It is the energy mix of the future and if they're going to stay viable, they need to be moving in that direction.

And what investors are asking them is to set very clear goals and implement them on how they're going to bring their carbon footprint down over the short term and over a longer term.

Royal Dutch Shell has wavered somewhat on turning toward a more sustainable business model over the years and they have not left other big lobbying groups like the American Petroleum Institute, so how do you know that their recent new direction is really going to stick?

... There's no question, Shell's got a lot more to do. They are at the start of their process, not the end of it.

We all know that to get to the Paris Agreement, it's about changing everything in what you do. Shell has to look at what the company might be and might look at 10 years from now and 20 years from now. That's more than a fossil fuel company.

"It is not easy to ask a fossil fuel company to de-carbonize overnight, but they cannot survive as a company in their present form and, at the same time, meet the Paris agreement."

Just generally speaking, can any fossil fuel company really do what the science tells us needs to be done to quickly de-carbonize our economy?

Look, it is not easy to ask a fossil fuel company to de-carbonize overnight, but they cannot survive as a company in their present form and, at the same time, meet the Paris agreement. The science says we need a major decrease of fossil fuels and the ExxonMobils and Shells and BPs have to look at transitioning their businesses or, frankly, the share value of their companies will not survive.

Shell is one of the biggest players in the global petroleum business, but it is only one. How much do you think the rest of the industry is going to follow their lead?

You know, there were certainly two or three other fossil fuel companies that are either following their lead or making their own commitments. A couple of them are probably in Europe, Total, BP is certainly trying to do more, but we've got ExxonMobil, who's doing anything but, so we still got a long way to go. I think it's important more than symbolically that Shell is setting goals. They are holding their executives accountable to meeting those goals. They are being transparent about it and they're starting to pull out of lobbying organizations that, frankly, lobby for policies that will defy their goals. That's a good start. And we need to see the other fossil fuels follow suit.