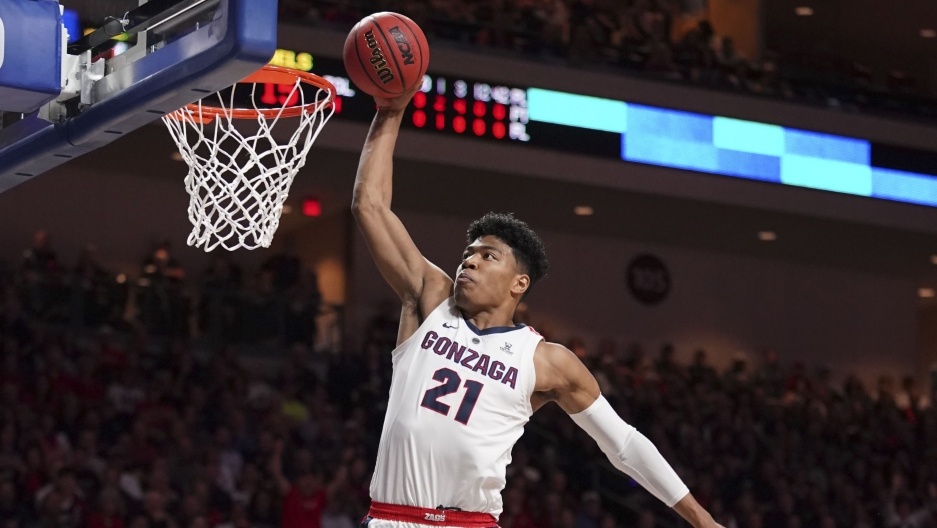 Gonzaga forward Rui Hachimura dunks the basketball against Saint Mary's during the first half in the finals of the WCC Basketball Championships in Las Vegas, March 12, 2019.

It’s March Madness. And once again, Gonzaga University in Spokane, Washington, is among the favorites to win the NCAA basketball tournament: a No. 1 seeded team powered by a budding superstar from Japan, a 21-year-old that many are predicting to be that country’s greatest basketball player — ever.

You’d be excused if you’ve never heard of Gonzaga’s 6-foot-8-inch Rui Hachimura from Japan. After all, he plays for a small school tucked away in the northwest corner of the country. Late-night TV host Jimmy Kimmel has made Gonzaga’s obscurity into a running gag this week.

“I think it’s very possible that Gonzaga is a hoax probably cooked up by the Canadians to screw up our basketball brackets,” Kimmel said.

Last night, more people were introduced to Gonzaga and its star, Hachimura. He scored 21 points, leading all scorers and propelling Gonzaga past Fairleigh Dickinson University and into the second round of the tournament.

Hachimura was born in Japan. His mother is Japanese, and his father is from Benin. Now a junior, Hachimura struggled when he first came to Gonzaga — with the game, the culture and the language. But now, he’s mastering all three.

The first Japanese player to make the NBA, Yuta Tabuse, the Michael Jordan of Japan, lasted just four games in the pros 14 years ago. One other Japanese player has made it to the NBA: Yuta Watanabe who currently plays for the Memphis Grizzlies. But Japan has never produced a player as talented as Hachimura, who is predicted to be a top pick in this June’s NBA draft.

About two dozen Japanese reporters are trailing Hachimura during the tournament. Still, it’s not full-blown Hachimura mania in Japan. First, basketball isn't that big of a sport there. Second, not being of 100 percent Japanese ancestry can be an impediment to becoming a sports icon.

“Japanese people want Japanese heroes who are really, really, really identifiable as Japanese,” said Jim Allen, a sportswriter who has been in Japan for more than three decades.

Allen compares Hachimura with Naomi Osaka, the world’s top-ranked tennis player — Osaka’s mother is Japanese, but her father is Haitian. Once she became a winner though, Allen says Japan fully embraced her. And with growing success, Hachimura is experiencing that embrace, as well.

“They’re not the 100 percent ideal Japanese heroes, but Japan has a scarcity of heroes,” said Allen. “So, they're fairly well accepted.”

With Hachimura, Gonzaga is favored to reach its second Final Four in three years at the NCAA tournament. Gonzaga faces No. 9 seed Baylor University on Saturday.