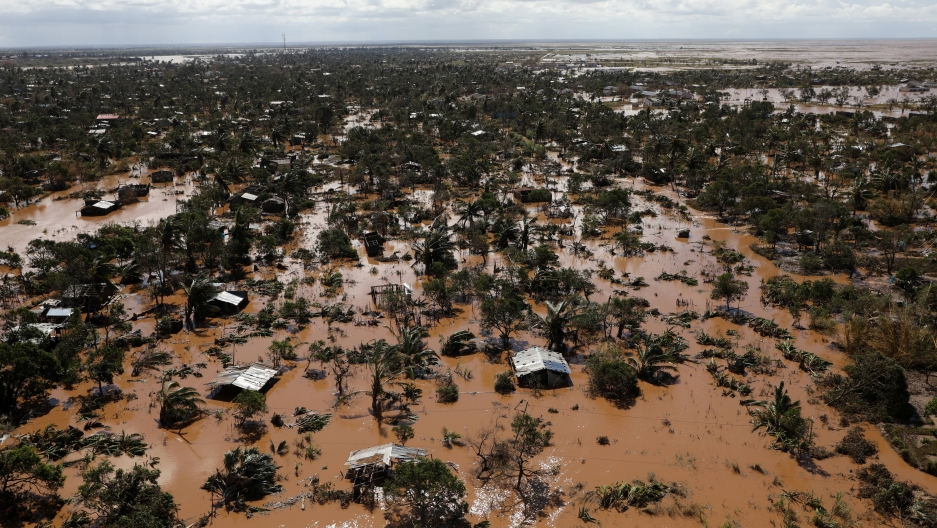 Tropical cyclone Idai has made headlines across southern Africa throughout the month of March. Lingering in the Mozambique Channel at tropical cyclone intensity for six days, the storm made landfall in Beira, Mozambique in the middle of the month, then tracked in a westerly direction until its dissipation.

The greatest impact of the storm was experienced on landfall. It caused flooding, excessive wind-speed and storm surge damage in the central region of Mozambique. Adjacent countries of Malawi and Zimbabwe experienced severe rainfall, flooding and damage from the high wind speed. Madagascar also experienced bouts of high rainfall during the storm’s pathway to Beira.

The flooding has left hundreds of thousands of people homeless and displaced across the region while the death toll has continued to rise in the week following landfall. The effects of the cyclone were felt as far south as South Africa and introduced rolling blackouts due to damaged transmission lines that supply the country with 1100 MW of power from Cahora Bassa in northern Mozambique.

Historically, nine storms that had reached tropical cyclone intensity made landfall on Mozambique. A larger number of weaker tropical systems, including tropical storms and depressions affect the region, with a total landfall of all tropical systems of 1.1 per annum.

The most severe tropical cyclone to make landfall in Mozambique was tropical cyclone Eline in February 2000. It had a category 4 intensity on landfall and resulted in 150 deaths, 1000 casualties from flooding, 300 000 people displaced and four ships sunk.

The storms off Africa’s east coast are weaker than their northern hemisphere counterparts. Category 4 and 5 tropical cyclones make landfall at a near-annual rate in the North Atlantic and North Pacific.

Why the wide impact

Why have so many countries been affected?

Tropical cyclones are large storm systems. Immediately surrounding the eye of the storm — a region of calm weather, no wind and no rain — are spirals of storm clouds that span a minimum radius of ~100km (around 62 miles). These cloud bands represent the thunder storm conditions, with the rain and winds typical of a tropical cyclone.

In recent years concerns have been growing about the impact of climate change on cyclones. Research has shown that changes to the world’s temperature, as well as ocean warming, are responsible for an increase in the severity of tropical cyclones. This has recently been researched for the South Indian Ocean. As the ocean is warming, the region which experiences temperatures conducive to tropical cyclone formation is expanding and temperatures in the tropical regions are becoming warm enough for cyclone intensification. Category 5 tropical cyclones, which have been experienced in the North Atlantic for almost a century, started to occur in the South Indian Ocean since 1994, and have occurred increasingly frequently since then.

This means that as climate change continues and intensifies, so too do these storms. This will mean a greater frequency of not only severe damage from storms, but damage over a larger region. In addition to the impact of warming on the storm intensity, climate warming has also been found to increase the expanse of the storms within any given intensity.

So how intense was tropical cyclone Idai?

Storm track records, which include the geographic location of the storm at set time intervals, the wind speed and the atmospheric pressure, are documented by a number of regional climatological organisations. This data is synthesised by the National Oceanographic and Atmospheric Association, providing a useful resource for scientists to explore storm behaviour.

Tropical cyclones are classified on the basis of their wind speed and central pressure. The weakest storms to be classified as tropical cyclones — category 1 — have a minimum sustained wind speed of 119km/hr (about 74 mph). At category 3 the storms have a minimum wind speed of 178 km/h (about 110 mph). As the category increases, so too does the potential for damage. Category 1 storms are classified as resulting in dangerous winds that cause some damage, whereas category 3 storms are expected to cause devastating damage.

The history of tropical cyclone Idai is documented in these records. The cyclone reached category 3 intensity between 03:00-06:00 on the 11th March 2019, while positioned at its most easterly extent of the storm track. By 03:00 on the 12th March the storm had dissipated to category 2 intensity, and it fluctuated between intensities of categories 2 and 3 over the 36 hours that followed.

From noon on the 13th March the storm maintained a category 3 intensity which persisted until landfall on the 14th.

What needs to be done

Storms that affect many countries present particular challenges. They clearly have no regard for political boundaries. The fact that they affect lots of countries presents challenges in both preparing for storm events in a proactive way and responding to prevent loss of life and livelihood. This requires countries to communicate effectively with one another, to provide coherent messages about the forecasting of the storm track and potential damage, and to facilitate effective evacuations.

This storm provides a grim prospect of the future of tropical cyclones in a region under continued threat from climate change. Effective adaptation to minimise storm damage is essential in preparing the region for an increase in the severity of these storms. Disaster risk management plans are also very important to minimise the loss of life.