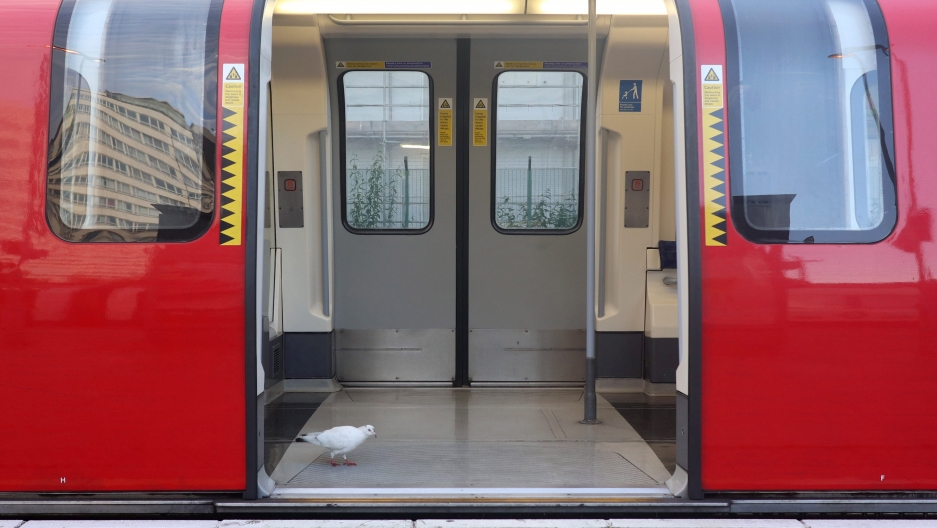 Luxembourg is set to become the first country in the world to make all public transportation free. Picture taken inside a commuter underground tube train at Stratford station, east London, Britain, June 13, 2017.

Luxembourg is one of Europe's smallest countries. It's roughly the size of Rhode Island, nestled between Belgium, Germany and France.

And yet, the tiny nation has a big traffic problem.

So, it's doing something no other country ever has: Making all public transportation free.

"I don't think there is a great potential for people to change their behavior as a result of making public transport free in Luxembourg," said Oded Cats, who studies transportation at Delft University of Technology in the Netherlands.

Cats says there are already cities and towns around the world experimenting with this. Estonia's capital Tallin, for example, made public transit free for residents back in 2013.

But the results weren't so great. People who were biking, walking, or already using public transit, used it more.

Oded Cats: We don't see any reduction in car traffic and therefore we cannot also expect any change in emissions, unfortunately.

Marco Werman: I mean, do you understand that? Because I don't. If I were offered free public transportation I think I'd be using it a lot more, and I have a car. I know the benefits of car transportation in a city like Boston, where you need a car.

Yeah, I agree. Intuitively, you would expect that. What we see is that price is very seldom a reason for people to start with to not use public transport. There are two things you can do to attract people to use public transport. One is to make the cost of using a car more expensive — and I emphasize using a car. So you make a more conscious choice of whether to use a car for any given trip, especially in a rush hour to downtown. You can do pricing measures for congestion charging. Secondly, you can make public transport more attractive and improve the level of service by reducing frequency and liability primarily. It's very seldom the case that one doesn't use public transport because it's too expensive compared to the car.

"It's very seldom the case that one doesn't use public transport because it's too expensive compared to the car. "

So you mentioned Tallinn, the Estonian capital, where there was a fare reduction. What cities have you looked at where they have eliminated any fee for riding public transport and what have you seen there?

We have very limited experience internationally with free public transport. We see it generally in small towns, tourist resorts, ski resorts and university towns — places where there is very little public transport to start with and there are specific user groups. There are very few cases where we have mid-sized or larger cities that introduced this, Tallinn being the most interesting example, with about half a million residents. What makes it difficult is for this to become financially sustainable. So, public transport systems worldwide have two main sources of income, one being subsidies through taxpayer money, and the other being ticket revenues. The split between these two varies from one place to the other. So in Tallinn, the break down was 70 percent subsidies and 30 percent ticket revenues before it became free. In most European cities, it's about 50-50. In the US, by the way, it's much higher. There, it's about 80 to 90 percent coming from subsidies, with few exceptions in large metropolitan areas. So, if your subsidy level is already very high, then the questions are whether you want to get to 100 percent and what is the identity of income source that will substitute the lost ticket revenues.

So clarify one thing: in Tallinn, do they have reduced fare or is it completely free?

Now it is completely free for residents. You must register as a resident of Tallinn for you to be eligible for a free ride. The only reason this was financially sustainable for them is because there were 30,000 people that lived in Tallinn but were not registered as residents and for them to benefit from free rides, this was an incentive for them to register. And once they are registered, they pay a municipal tax. The additional revenues from this municipal tax for those people that are now newly registered and it covers lost ticket revenues.

When this plan goes into effect in Luxembourg who's going to be able to get on and off the buses and trains for free, just citizens? With the whole Benelux — Belgium, The Netherlands, and Luxembourg — you've got a lot of people coming in just to work for the day, right?

Indeed, very good point. In Luxembourg, about 50 percent of people are actually commuters from neighboring countries, primarily Germany, France and Belgium. That is an interesting challenge because it will only be free on the Luxebourgian part of the trip. If you take, let's say, a train trip from Germany or France, they will have to pay for the ride. Only the domestic trips in Luxembourg will be free.

Luxembourg is one of the wealthiest countries in the world. Ultimately, isn't that the reason you're actually able to try this out in the first place? Could you imagine this happening in a less wealthy country?

At the same time, I would not expect great impacts. First, because of its traffic beyond domestic borders and secondly, because a lot of people who work in Luxembourg either lease a car or get a car from their employer and have some obvious benefits associated with using a car such as a park and so forth. So, I don't think there is a great potential for people to change their behavior as a result of making public transport free [in] Luxembourg.

When does this plan actually go into effect?

After this summer, I believe.