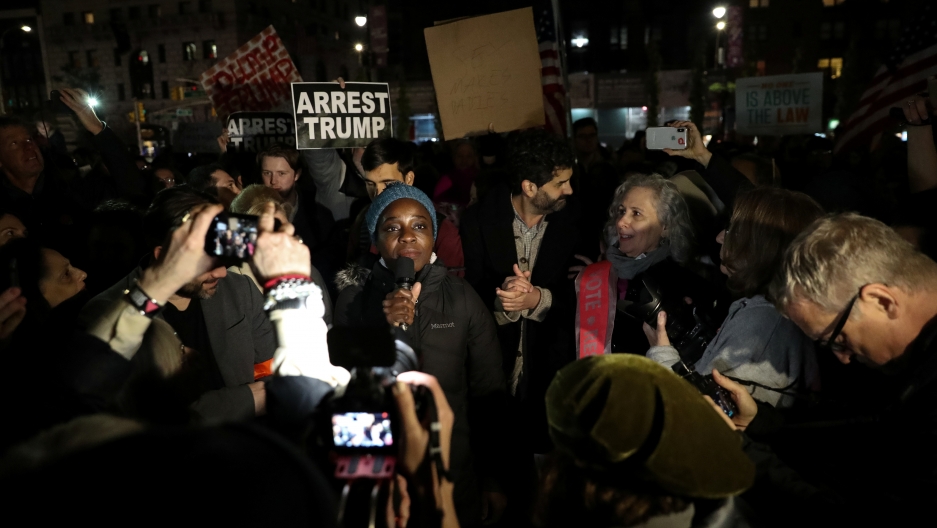 Therese Patricia Okoumou, who tried to climb the Statue of Liberty July 4, 2018, makes a speech during the "No One is Above the Law" protest in New York City, Nov. 8, 2018.

As American families celebrated Independence Day last July 4, Therese Patricia Okoumou made breaking news. Television screens across the country showed her sitting casually on the Statue of Liberty’s pedestal, as helmeted police officers, secured by ropes and harnesses, crawled toward her to force her down.

“I was not concerned about the people, or the officers. And certainly I was not thinking about my own life,” says Okoumou, a former personal trainer and naturalized American from the Republic of Congo. “I had the children in mind, and the children alone.”

She’s talking about the thousands of undocumented immigrant children held in US detention facilities. In climbing the symbolic statue, Okoumou wanted to make Americans think about those children on the nation’s birthday. She was found guilty in December of trespassing, interfering with agency functions, and disorderly conduct, but was released on bail. At a sentencing hearing set to take place Tuesday, March 19, she could be ordered to spend as much as three months in jail.

But Okoumou says her “mission” was worth it because it got President Donald Trump’s attention. At a rally on July 5, he called her a “clown.”

“The president was addressing my action,” she says. “That was a success.”

In the last 2 1/2 years, the US has had more acts of resistance than ever before, according to Erica Chenoweth, a professor of public policy at Harvard University's Kennedy School of Government.

“Globally speaking, we live in the most contentious time in recorded human history, as civil resistance goes.”

“Globally speaking, we live in the most contentious time in recorded human history, as civil resistance goes,” she says.

“It is true that one person can make a difference — and in fact, I would argue that that in this instance this person has made a difference,” she says. “But that doesn't mean that that she alone can win.”

Okoumou is determined to try. When Trump was elected president, she went from having never protested before, to making it a part of her daily routine. She would go to work as a personal trainer from 5:30 a.m. to about 11 a.m., stop at home to eat, grab her banners and signs, and spend the rest of the day in front of Trump Tower in New York City.  Protesting, Okoumou says, became a calling.

“I was having nightmares about the children in cages,” she says. “Having been born and raised from the Republic of Congo, I used my background as some sort of encyclopedia to become a check of (sic) balance on what I'm witnessing around me.”

That’s what led her to join a direct-action group called Rise and Resist that was protesting US Immigration and Customs Enforcement on Liberty Island last July 4. Okoumou didn’t tell them she was going to try to climb the statue.

“I didn't tell a soul and I was not intending to tell a soul because there was no time for me to be discouraged or be swayed in a different direction,” she says. “This was a mission.”

After Okoumou’s first court hearing, she stood in front of a crowd and quoted former first lady Michelle Obama: “When they go low, we go high, and I went as high as I could.”

And she continued to do so. In November, Okoumou attempted to climb the Eiffel Tower in Paris, France — it was France that gifted the US the Statue of Liberty — with a banner reading #ReturnTheChildren. She wanted to urge the United Nations to investigate US immigration policy. In Austin, Texas, this February, she scaled a four-story building housing a nonprofit that runs shelters for detained undocumented children. She remained on the building for eight hours, and charged with a misdemeanor. Citing that action, on March 1 in New York, Magistrate Judge Gabriel Gorenstein put Okoumou under house arrest and made her wear an ankle bracelet.

“History is made by people who are willing to take risks, who are single minded, who are zealous."

“Patricia’s repeated recidivist climbing is making my job that much harder,” jokes Okoumou’s attorney, Ron Kuby. But, he says, she’s taking risks that other people can’t — or won’t. “History is made by people who are willing to take risks, who are single minded, who are zealous. And those people by nature, they’re not the people like us who sit around and dither. They’re the people who act. And yes, sometimes they're a little kooky.”

Kuby says no one has served time for protesting or trespassing at the Statue of Liberty before.

“I was judged by the law of this country, which is embedded in white supremacy. If I had been judged on principles by the people, I would have been found not guilty.”

Nicholas Biase, spokesperson for the US Attorney’s Office in the Southern District of New York, declined to comment. Okoumou says she’s ready to go to jail, but hopes she doesn’t have to. She’s trying not to think about it.

“I was judged by the law of this country, which is embedded in white supremacy,” she says. “If I had been judged on principles by the people, I would have been found not guilty.”

Editor's note: A federal judge ruled on March 19 that Therese Patricia Okoumou would not serve time in jail for her July 4 action at the Statue of Liberty. Okoumou was sentenced to five years probation.