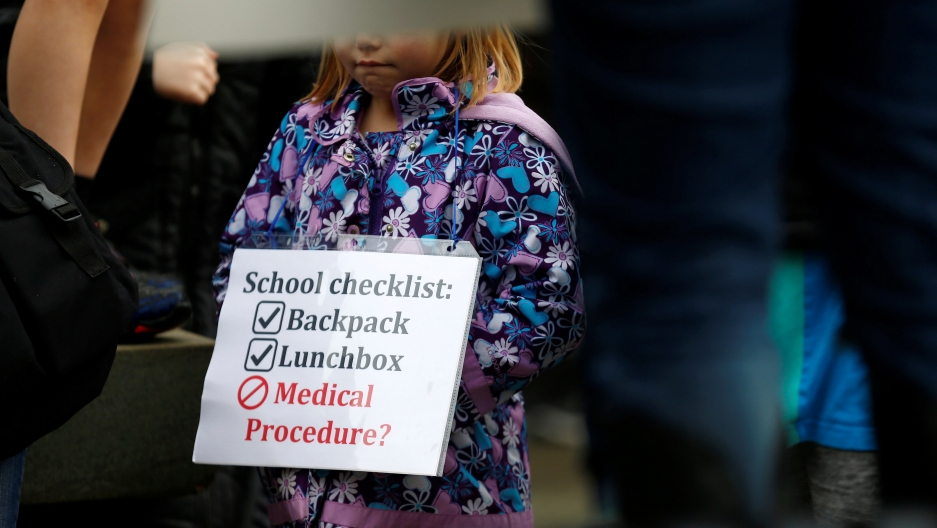 A child holds a sign against mandatory vaccinations during the "March for Medical Freedom" to protest SB 5841 in Olympia, Washington, US, Feb. 20, 2019.

As a new mother, Eula Biss was hesitant to vaccinate her son.

She researched anti-vaccination in the US and other parts of the world and wrote about her initial hesitancy in her 2014 book, “On Immunity: An Inoculation.” She says it addresses fear of the government medical establishment, and what might be in our children’s air, food, mattresses, medicines and vaccines.

The World's Carol Hills speaks with Biss about vaccine hesitancy of mothers in the US and around the world.

You know, the project of this book was really for me to try to figure out what was behind the fears that drove my own hesitancy. So, I was what is called now a "vaccine hesitant." I didn't vaccinate my son against the first disease on the schedule, which is the Hepatitis B vaccination. And later, as I learned more about the ethics and the logic behind vaccination, I was curious about my own hesitancy and what had driven it. And so a lot of the project of the book was trying to look into my own emotional state at the time that I made that decision. And I think what I felt at the time [...] I wouldn't have been able to articulate it well. It was a, kind of, amorphous sense of fear and caution.

Part of this is also that we put a lot of pressure on mothers and when something goes wrong with a child, the first person who gets blamed is a mother.

You write in your book about vaccine refusal in places like Pakistan and Nigeria. How is it understood as a form of anticolonial resistance? Tell us more about that.

There were some fears about the idea that vaccination could be used as a secret weapon against a people to eradicate a population or limit a population. That isn't what was happening — the vaccines that were being administered were real vaccines. But it doesn't help that one of the ways that the US government went after Osama bin Laden was with a fake vaccination campaign. And I think that it was a dramatic mistake.

They were using it to collect DNA from people in the locker room of the building where they suspected he was.

Yes. They wanted to locate his family, make sure it was really him so that they could target that compound. And so that then gives people all over the world a reason to fear that vaccination is being used for purposes other than the prevention of disease. And in almost every case, it's only being used to prevent disease. But that was an incredible misstep on the part of the government and the military because it did give people reasons to fear something.

If it's the response to colonialism in other countries, what is the gut feeling for people who are against vaccinations in the US? Is there a common theme?

Yeah, there is. I think it's relationship to power structures. And so, that's true in the US, it's true in other countries. There're actually legitimate concerns here. That doesn't mean that the decision not to vaccinate is right — in an ethical sense or in a factual sense. But here and in other countries, it's an expression of mistrust and or broken trust.