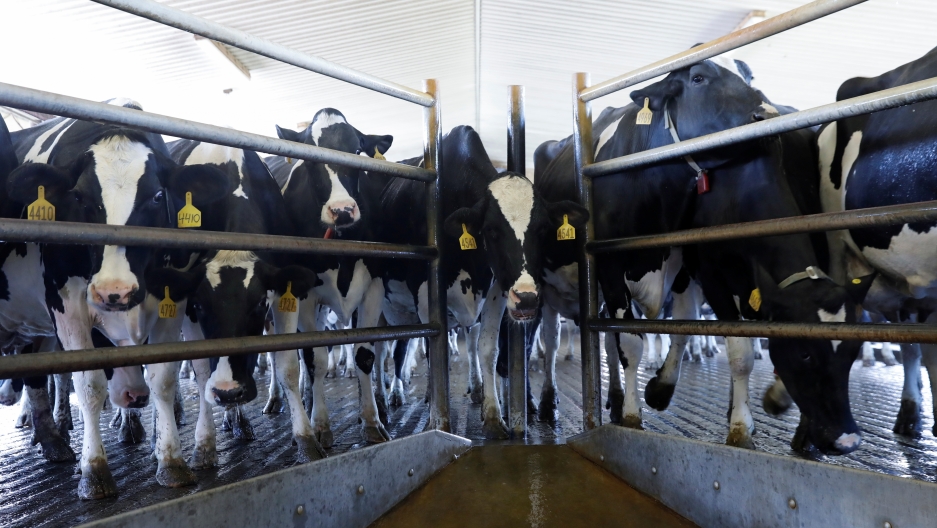 Dairy Cows stand during a tour by US Agriculture Secretary Sonny Perdue at the Brabant Farms in Verona, New York.

This past December, Wisconsin organic dairy farmer Jim Goodman penned a heartfelt “Perspective” piece for the Washington Post about his premature retirement from the industry after 40 years. “Dairy farming is little more than hard work and possible economic suicide,” he wrote before launching into an explanation of the challenges he’s faced since the early 1980s: financially ruinous milk surpluses, debt, unstable export markets, and ineffectual government subsidies among them. “All we ever asked for were fair prices,” he wrote.

As the latest crisis in American dairy enters its fifth year, the word “desperate” has begun to pepper the descriptions of a situation that started off horrible in 2014 — with plummeting milk prices due to one more in a long line of gluts — and has worsened ever since. California, the country’s largest dairy-producing state, is currently losing about one dairy farm a week. Wisconsin, the second-largest producer, is losing two a day; it lost 691 in 2018 alone.

So when the usually regulation-averse Wisconsin Farm Bureau Foundation (WFBF) announced in December that its 240 dairy delegates had voted to open up discussion of supply management — a program implemented in Canada some 50 years ago to stabilize prices for its own dairy farmers — it wasn’t an enormous surprise.

At the root of the issue in the US: Farmers are producing too much milk. When prices go down, they produce more milk to make up for the profit loss. When prices go up, they produce more milk to take advantage of the opportunity. The underlying premise of supply management is simple: Producers limit the amount of milk they put on the market — and therefore the number of cows, and the amount of feed required — so that it’s in line what they believe consumers will purchase.

In suggesting such a strategy, WFBF gave a nod to a growing coalition of farmer organizations — including the National Farmers Union and its member branches in Wisconsin, California (WFU/CFU), and four other regions, as well as the National Farm Organization (NFO), the Holstein Association USA, and the National Family Farm Coalition (NFFC, of which Goodman is board president) — calling for a dramatic change in the way milk is produced and priced in the U.S.

Neither the 2018 Farm Bill’s expansion of the Margin Protection Program — an insurance plan that requires already-strapped farmers to pay to hedge their bets against tanking prices — nor the Canadian government’s opening up of 3.6 percent of its dairy market to US milk producers, has succeeded in mitigating today’s crisis.

Now, even as the idea faces some strong opposition from certain legislators and industry parties, a growing number of farmers are wondering whether supply management could work where these and so many other initiatives have failed.

What is supply management?

Managing supply ensures “predictable, stable prices,” CBC News explains. In the 1960s and ’70s, when technological advances helped milk production increase from 528 gallons per cow per year in 1944 to over 1,000, Canada opted for supply management to deal with the effects of overflow. The US, by contrast, embraced then-Secretary of Agriculture Earl Butz’s “get big or get out” mandate favoring industrial-scale dairies flooding the market with low-cost milk.

Further exacerbating the consistently inconsistent milk industry here, according to Wisconsin Farmers Union government relations associate Bobbi Wilson, and many others in dairy, was Ronald Reagan’s decision to end parity pricing, which had tied the price of milk to the cost of its production. Instead, the price of milk is now set every month by the government and is linked to what it costs to make it into cheese and other products.

Another aggravator is the emphasis on finding foreign markets for our never-ending surplus. “Exports are not something we want to be dependent on; it’s been an endless race to the bottom,” Wilson says. “Not only does it not benefit farmers here, it’s a detriment to farmers elsewhere to have cheap commodities dumped on their markets.”

Related: While small dairy farms close, this mega-dairy is shipping milk to China

The success of supply management in Canada is predicated upon three things. First, it depends on per-province quotas to “prevent market gluts that would cause prices to dip and disrupt farm incomes,” according to the CBC. Secondly, it relies on a minimum price for milk, which is negotiated between farmers and processors, and guarantees that farmers do not sell milk at prices lower than what it costs to produce — perhaps the most urgent complaint of American farmers. And lastly, it relies on the strict control of imports in the form of high tariffs, which makes foreign milk more expensive for Canadian consumers to buy than its domestic counterpart.

For the last year, Canadian dairy farmers have been hopping across the border to explain in a series of heavily attended meetings the benefits of supply management to farmers in Wisconsin, California, and elsewhere. “Canada is offering us a lifeline,” says California Farmers Union executive director Lynne McBride. She helped set up some of these meetings and coordinated with other organizations to push for a Sustainable Milk Inventory System Act (SMISA).

“Where we’re [currently] paid $16 a hundredweight for milk down here, they’re paid $26,” McBride said. (A hundredweight is about 11.5 gallons; the cost of production is around $22 per hundredweight.) Canada is “showing us a way out of this crisis,” she added.

“When we vetted it with our members, everyone said it was rational,” says Mark McAfee, owner of raw dairy producer Organic Pastures and secretary of CFU’s board. “We’ve worked hard to light the fire under the national discussion.”

Part of what’s preventing this shift from being implemented, as McAfee sees it: “Greed-based massive dairies that destroy everyone else; they like to see prices stay low.”

And since passing SMISA would require an act of Congress, that’s another barrier; legislators have so far proved averse to making the sorts of changes many dairy farmers say they need to stay afloat. “The current administration and Congress have been supportive of—and continue to support—large-scale industrial agriculture,” says NFFC’s Goodman.

Cornell University agricultural economics professor Andrew Novakovich agrees that policy change is unlikely—regardless, perhaps, of who’s in office. Leading up to “what became the 2014 Farm Bill, there were two versions of growth management [another term for supply management] proposed,” he says. “One was aggressive and sought to create a national system that would intervene in times of price stress. Then there was a much more timid version that… was not all that scary. But the U.S. Congress wouldn’t touch it with a 10-foot pole.”

Novakovich believes a plan like SMISA is “a bridge too far. [Government] wants to help farmers but not at the expense of consumers, and I don’t think society has an obligation to make it profitable for anyone… to be a dairy farmer.” He refers to Canada’s supply management as “very heavy-handed” and criticizes their system, which he says has the potential to “stifle innovation.”

These arguments have circulated throughout the decades-long debate about supply management, and they continue hold sway. Case in point, WFBF’s umbrella organization, the American Farm Bureau Foundation, was “overwhelmingly opposed to the idea of supply management” at their conference in New Orleans two months ago, according to WFBF’s executive director of governmental relations Karen Gefvert.

And she points out that whatever flexibility WFBF’s dairy committee might have in discussing the future of the industry, it has a firm position against mandatory quotas. It’s worth noting that WFU favors supply management that avoids quotas, too, mostly by balancing supply with demand by having farmers pay to expand their operations.

But little by little, supply management is rising to the surface of the national conversation. University of Wisconsin-Madison director of dairy policy analysis Mark Stephenson told radio station WPR in January that he believed it could be an effective way to increase the price of milk paid to farmers — despite governmental hurdles. “Some version of that program… [could] be a little softer than a Canadian system and certainly might help moderate these prices when we get into these deep downturns,” he said.

Goodman says he’s starting to see traction in unexpected places — namely, on the pages of farm magazines: “They’ve never even mentioned supply management and now, every issue, they’re running letters from farmers saying, ‘It might be time to think about this.’ And the editors, who have always been pro-growth, are now saying we need to look at something, because we’re losing too many farmers.”

Proponents agree that for supply management to be effective, it needs to be national — “like single-payer healthcare,” says Goodman. He’s planning to stay in touch with legislators considering meaningful assistance to dairy farmers—such as New York’s Kirsten Gillibrand and Vermont’s Bernie Sanders (neither senator’s office responded to requests for comment). He’s also encouraged by the proposed Green New Deal. “I’d like to see it be inclusive of the way we farm, and I’ll be reaching out to supporters,” says Goodman.

WFU’s Wilson is on the same page, looking for ways to contribute to various political conversations. But she’s also focused on what can be done in the meantime, as dairy farms continue to shutter and the crisis shows no sign of slowing down. Both WFU and CFU are encouraging farmers to become more involved in their co-ops to “have more of a voice in how they’re managed,” she says. “We’ve been overwhelmed by the number of people contacting us and saying, ‘Give me something to do.’”

Wilson is encouraged by state-level initiatives in places like Maine, which now offers low-interest loans to keep dairy farmers going — although, “Do we really want them saddled with more debt while we try to get them long-term relief?” she asks.

On another track entirely, Albert Straus, who owns Straus Family Creamery in Northern California, is trying to lead his fellow dairy farmers to a partial solution by his own example. On the one hand, he’d like to see more of them embrace organic, which, though currently experiencing its own pricing drops that he says require volume control, he thinks is a more stable market.

His creamery, which operates as a small cooperative buying from eight other local farms, has its own version of supply management — wherein the farmers discuss quarterly the amount they can produce and the amount the company can sell in order to arrive at a price. He describes it as “regional brand model that people could replicate — around … practices and communicating to consumers the values of stewardship of land and animal welfare.”

When it comes to the national model, he adds, “I know politically that [it] might not work, but we need to look at any tools to help farmers, and supply management could be critical to their survival.”

The Dairy Together Roadshow, a new round of meetings orchestrated by WFU to teach farmers about supply management, launches in New York State on March 28, then moves on through the spring to New Hampshire, Vermont, Wisconsin, Minnesota, South Dakota, New Mexico, Colorado, and California.

“We need to get the info out there,” says Wilson — to anyone left to hear it.

This article was originally published on Civil Eats.