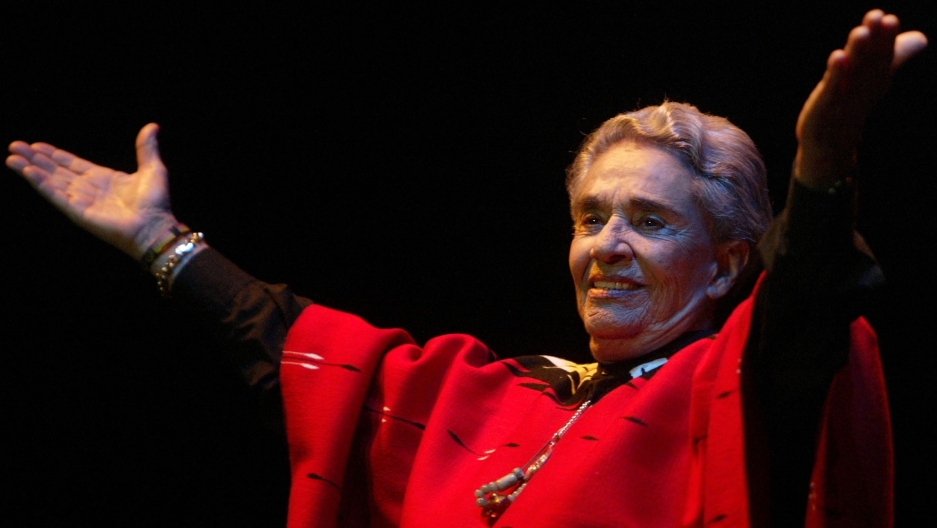 Even as an untrained musician, Chavela Vargas had the ability to captivate her audiences after singing only the first few words of a song.

“There are so many ways to sing a [ranchera] song, but when you listen to somebody sing two words, and in those two words, they can crush you, that’s something magical. Chavela had that. That was the reason why she was loved,” said Grammy-winning producer and vibraphonist Felipe Fournier, who, like Vargas, was a Costa Rican living in Mexico — before he moved to New York.

The bohemian Vargas, named Isabel Vargas Lizano at birth, was famous for her unique delivery of traditional, Mexican ranchera music. Vargas, who died at 93 — she was born 100 years ago next month — also became a major figure in the LGBTQ community in South America and Spain.

Today, artists continue to remember her: A mural depicting Vargas was unveiled in Tijuana, Mexico, on Wednesday, and a film festival in Málaga, Spain, from March 15 to 24, will pay homage to her. Also, Fournier has a podcast episode dedicated to Vargas in April.

Vargas sang la canción Mexicana, or Mexican popular music — mostly songs about love and heartbreak (usually told from the man's perspective — she didn’t bother to switch out the pronouns). She changed the way ranchera music was performed by taking liberties with the tempo, melodies and lyrics. Vargas succeeded as a musician with no formal training and performed in some of the most renowned venues around the world in Mexico, Argentina, Spain, France and the US.

“A lot of the time, she is out of tune. But that doesn’t matter. It’s the spirit, and the heart, and the interpretation, that matter. Having your own voice is the most important thing for an artist. And I found that in Chavela.”

“Chavela is unique,” said Fournier. “It’s not about the intonation and the tuning. A lot of the time, she is out of tune. But that doesn’t matter. It’s the spirit, and the heart, and the interpretation, that matter. Having your own voice is the most important thing for an artist. And I found that in Chavela.”

Fournier compares Vargas’ voice to that of Tom Waits. “Tom Waits has a horrible voice. But you can recognize him with whatever he is singing.”

Related: This Guatemalan rapper thinks hip-hop can unite all women

Guitarist Miguel Peña accompanied Vargas for several years starting in 2003. "She did not have a beautiful voice,” he said in a 2017 interview in Mexico City. “She was not a good singer, but she was not lacking anything ... she had something special.” When Vargas sang her famous tune, "La Llorona,” in reference to the legend by the same name, which translates as "The Crying Woman," he said, “She was not singing ‘La Llorona’ — she was whispering it.”

Onstage, Vargas performed as if she was speaking to a confidant — as if she was the very characters of the songs she interpreted. “Macorina,” “Piensa en mi,” “Que te vaya bonito” and “Adoro” were among Vargas’ most famous renditions.

But she never sang a song the same way twice. “She had the luxury of changing the melody,” Peña explained. “Or if she did not remember the lyrics, she made them up on the spot. I don’t know how she did it. … No one would ever notice.”

When she was a teenager, Vargas left her native Costa Rica for Mexico. The chanteuse told the story in various ways through time, so the details are murky. “She re-created the past,” contemporary Mexican writer Ana Terán said. “And she would sometimes change a character. Sometimes a place. Sometimes the phrases that she remembered.”

But myths, as biographer Benjamin Moser puts it, are much more compelling than reality. After Vargas died, Moser wrote a piece about her for the New Yorker. Moser told The World that she transformed bar songs into art.

In Mexico, Vargas cleaned houses and sang in the streets and in cantinas. “She always loved singing,” Terán said. “I think she ran away [from Costa Rica] to find a place where she could become whatever she wanted. Away from whatever.” Soon enough, her voice, as well as her beauty, struck audiences. It was unconventional and powerful. It felt new.

For Vargas, Mexico was an easier place than Costa Rica to be who she was, but it was still a tough environment, socially. Mexican pianist and music journalist Ignacio Acosta said Mexico wasn’t ready to accept Vargas. She wore pants, not dresses. Then, there were the cigars, the tequila, the pistol she kept handy, the affairs.

“For a long time, we had a very conservative, a very religious society, and Chavela was lesbian. Her personality and sexual orientation were problematic for Mexico.”

“For a long time, we had a very conservative, a very religious society, and Chavela was lesbian. Her personality and sexual orientation were problematic for Mexico,” Acosta said. “Nobody wanted to talk about homosexuality at the time. … She was in love with some of the prettiest actresses, who were also lesbians. There were a lot of gays in politics and in the arts. But they couldn’t say anything about it because of how conservative Mexico was.”

Related: Mexico has its first Indigenous woman candidate for president 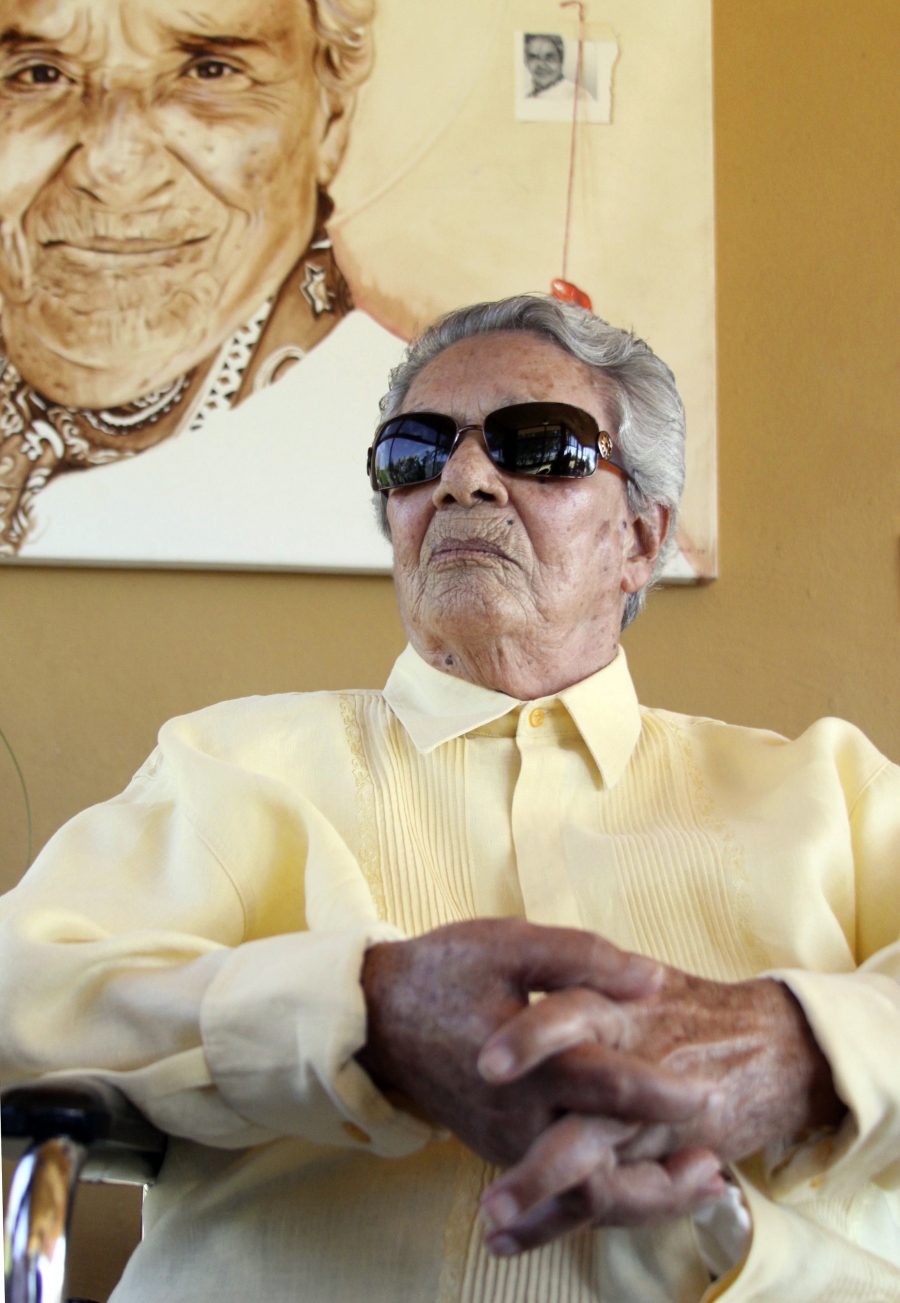 Legendary Costa Rican singer Chavela Vargas sits underneath a portrait of herself at her home in Tepoztlan, Feb. 2, 2011.

Acosta compares Vargas to late Mexican vocalist Juan Gabriel. “Nobody talked about his homosexuality, but everybody knew he was gay,” Acosta said. “I remember mothers who would exult during his concerts because he was so liberated. He expressed something they could not openly express. And Chavela started this for women … She became a heroine for so many women who were oppressed, and who were trying to figure out how to do the same.”

Grammy winner Mireya Ramos leads the all-female, mariachi band Flor De Toloache. She describes Vargas as a revolutionary — she wasn’t afraid to “push boundaries and express herself,” Ramos said. “Chavela was one of the leading pivot [figures] of cultural changes worldwide during the sixties. [She became] a mind and door opener for women and all [genders,] an inspiration to us all.”

Indeed, Vargas befriended artists Frida Kahlo and Diego Rivera as well as Mexico's most renowned composers, such as Agustin Lara and José Alfredo Jiménez. Jiménez became one of her dearest collaborators. “She and Jiménez could stay at the Tenampa for days on end,” Acosta said, referring to a famous mariachi venue in downtown Mexico City on Plaza Garibaldi. “Women in Mexico were supposed to go to church and have children. They couldn’t behave like men.” But Vargas did. “And she lost a lot of friends because of her alcoholism. Nobody wanted to be around her and she started to be very alone.”

After her recovery from alcoholism, Vargas claimed to have a mystical relationship with the spirit of the Spanish poet, Federico García Lorca. She used to say she would converse with him at night in her room at the famous Residencia de Estudiantes, where she stayed when she was in Madrid. (She also claimed that her room had been Lorca's in the past.) That relationship is illustrated in Rubén Rojo Aura's colorful film, “El Ruiseñor de la Noche.”

Vargas graced the world’s most famous stages including Bellas Artes, in Mexico City, the Olympia, in Paris, and Carnegie Hall, where she performed in 2003. “It was full, full, full,” Moser said. “Almost only Mexican audience members attended, almost all homosexuals … many people were delighted to see her after so many years. There was that patriotic feeling pertaining to ‘here’s a Mexican grandeur we haven’t seen in many years and that we will never see again.’ The applause was just enormous. There was a tremendous emotion.”

That ability to generate such emotion is what Vargas will be remembered for. “In her voice,” filmmaker Pedro Almodovar said in the American documentary, “Chavela,” “I’ve found one of my best collaborators … When I include her in my films, Chavela’s voice becomes part of the script. She’s completely organic to the moment, as if the character is still speaking. Her lyrics reflect the essence of what’s happening in the film.”

Ultimately, the singer embodied sophistication, intelligence, and talent. Her free spirit and provocative ways fostered a new approach to performing ranchera music as well as to being a woman.