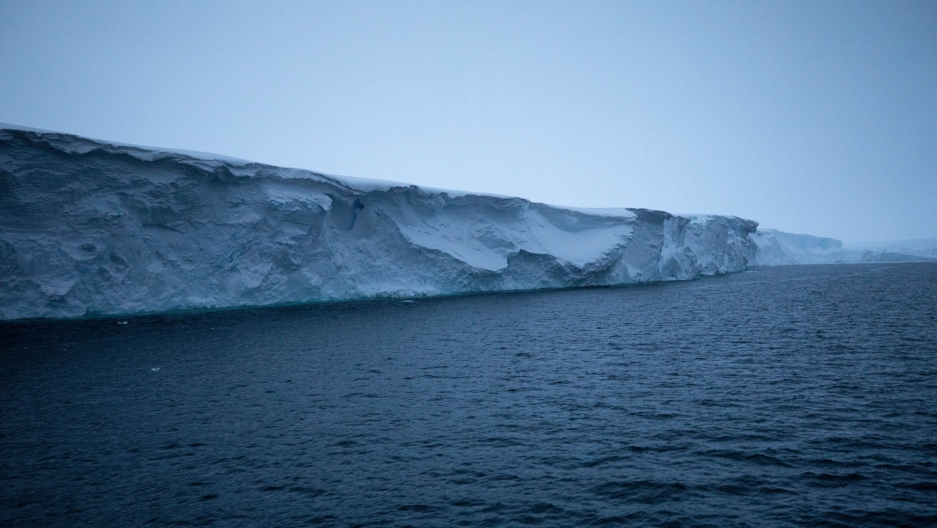 The Nathaniel B. Palmer arrived at Thwaites Glacier in the early morning hours of Feb. 26, roughly a month after leaving Punta Arenas, Chile. The eastern ice tongue, pictured here, is the most intact portion of the glacier.

The Nathaniel B. Palmer arrived at Thwaites Glacier around 2 a.m. ET on Feb. 26, nearly a month after departing Chile. On the first day at Thwaites, the Palmer traced a roughly 100-mile path around the edge of the glacier and above it into the Amundsen Sea.

While navigating around Thwaites, researchers mapped portions of the sea floor in front of the glacier that were previously uncharted. 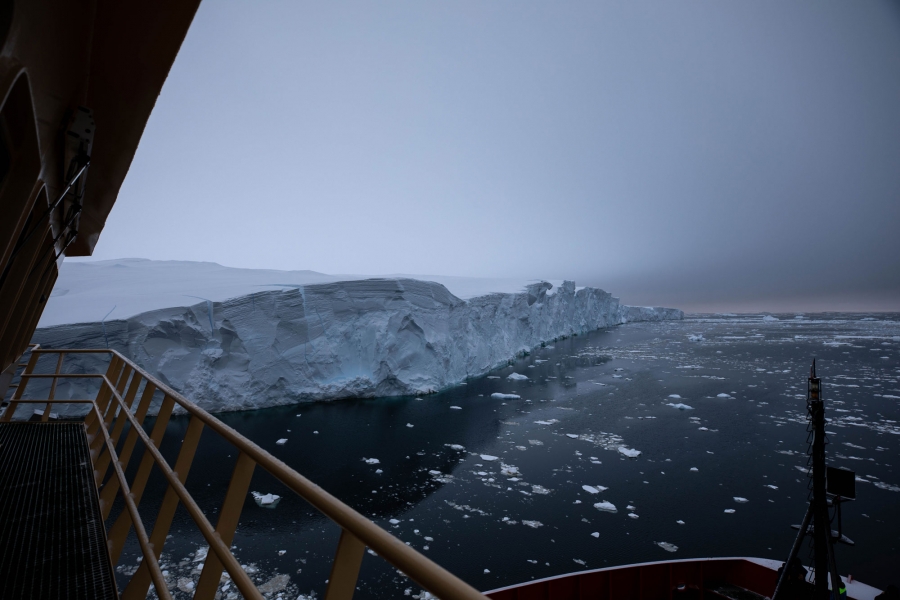 On the first day at Thwaites Glacier, the Nathaniel B. Palmer traced a roughly 100-mile path around the Florida-sized glacier's edge.

These maps will help scientists understand what happened as Thwaites receded in the past, and how it might behave going forward, allowing models to better predict how much the Florida-sized piece of ice might contribute to sea level rise in coming decades. 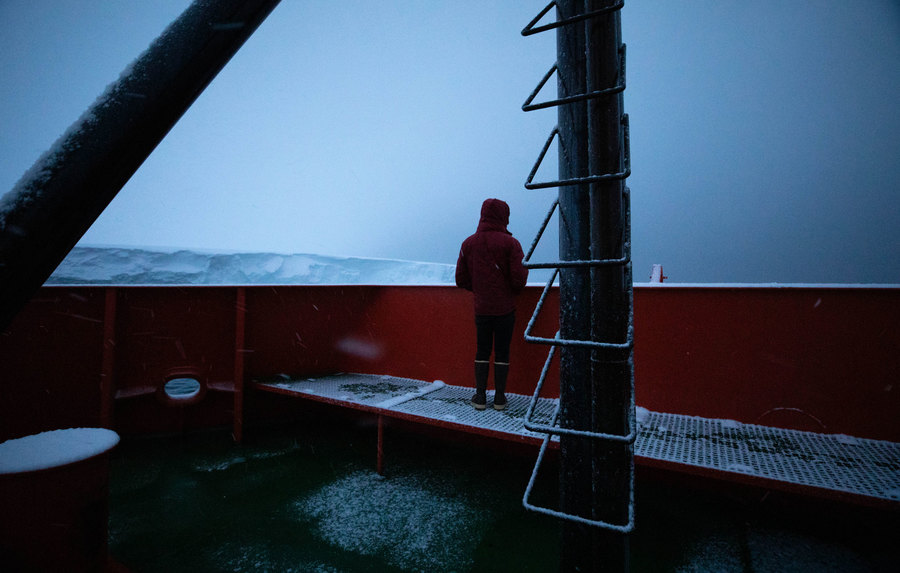 Oceanographer Peter Sheehan looks out at Thwaites from the bow of the Nathaniel B. Palmer before sunrise on the day of arrival.

“It looks kind of mystical,” said Peter Sheehan, an oceanographer with the University of East Anglia in the UK. “It’s like standing in a cathedral, you feel the hush of reverence.” 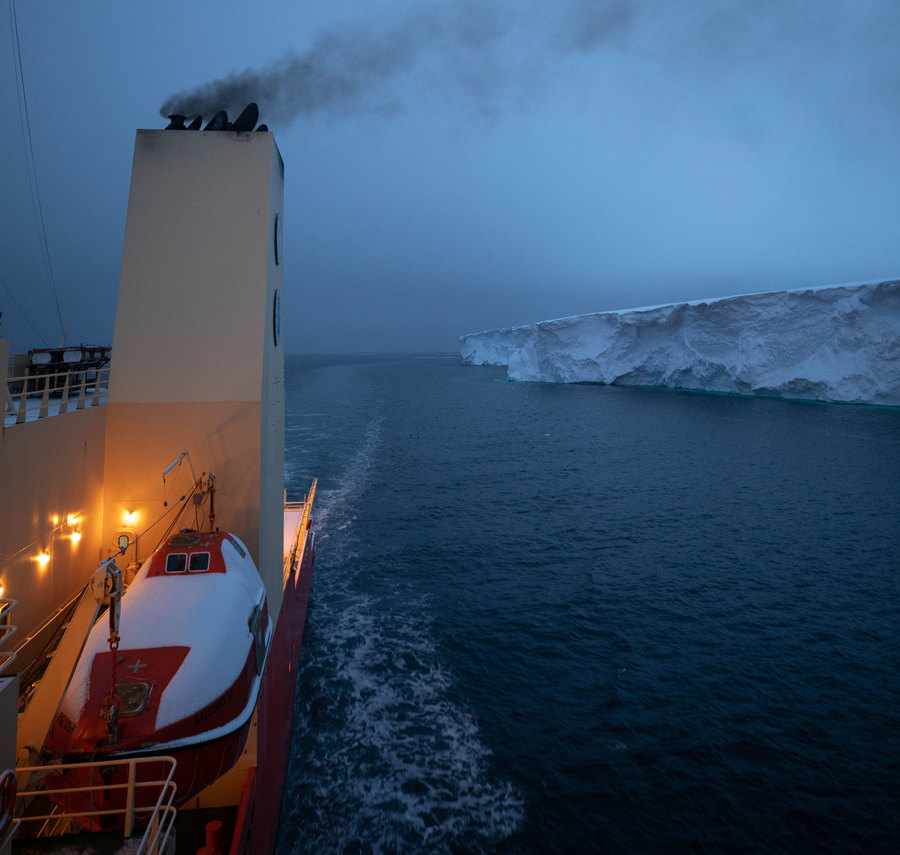 The Nathaniel B. Palmer navigates along the eastern tongue of Thwaites glacier. 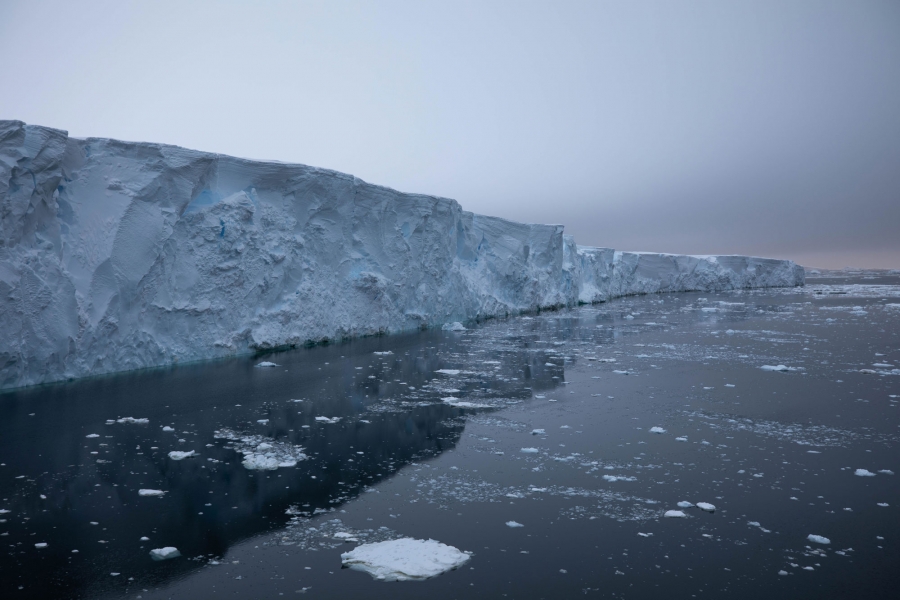 The front face of Thwaites Glacier rises an estimated 60 feet to 75 feet above water in the areas where it is most intact. Roughly 90% of an ice shelf typically sits below the water line.

The Amundsen Sea was particularly still during the Palmer’s first day at Thwaites, allowing the ship to get closer to the glacier than expected. Navigating through uncharted waters, Chief Mate Rick Wiemken said he kept about a quarter mile from the glacier face to reduce any risk to the ship from calving icebergs. 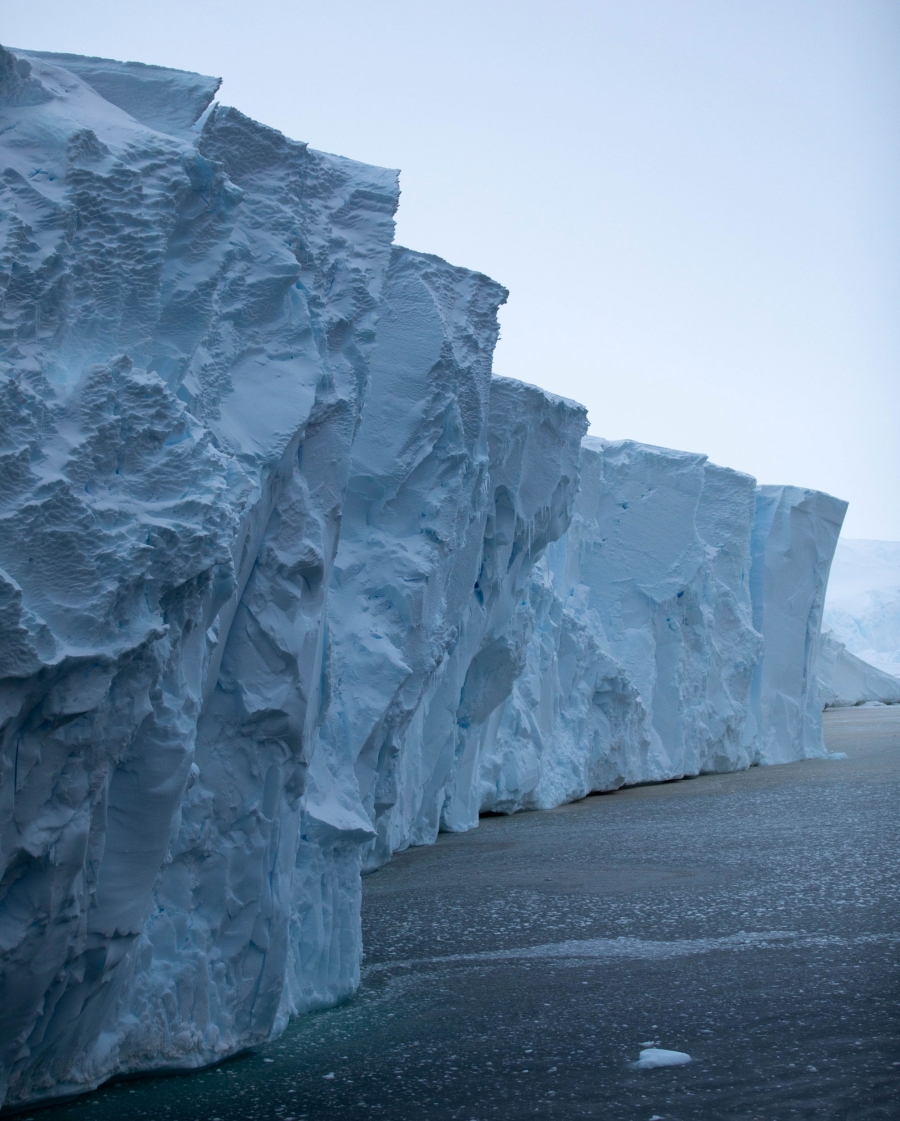 The front face of Thwaites glacier rises an estimated 60 to 75 feet above water in the areas where it is most intact. Roughly 90 percent of an ice sheet typically sits below the water line.

As the Palmer navigated west along the face of Thwaites, the glacier front grew increasingly broken and chaotic — visual signs of its instability.

Glacier fronts are typically relatively uniform, with sheer vertical fronts like cliff faces. The wavy top and gentle seaward slope of Thwaites in many places, and in icebergs recently calved from Thwaites, are also signs of its volatility. 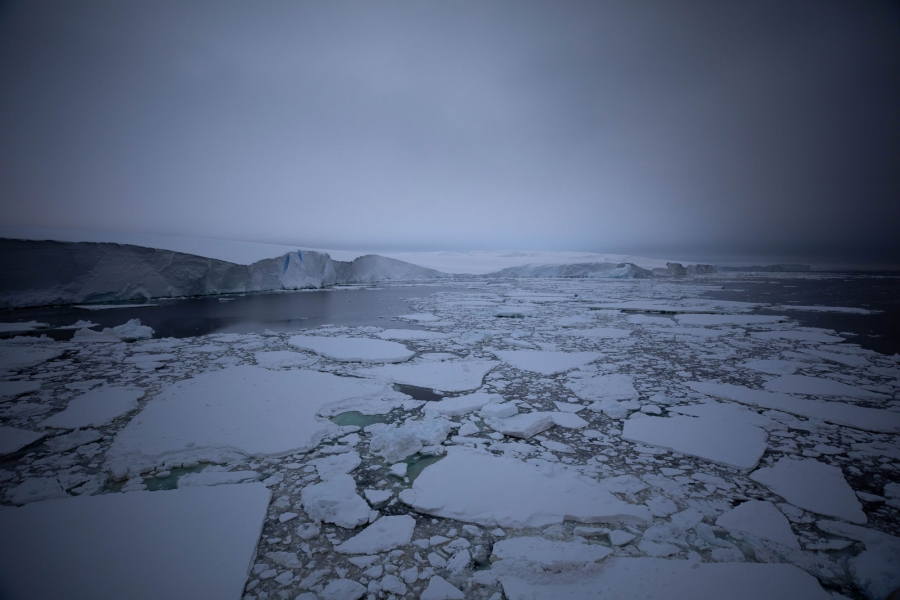 As the Nathaniel B. Palmer traced the edge of the Thwaites ice shelf from east to west, it reached portions of the glacier that were more degraded. 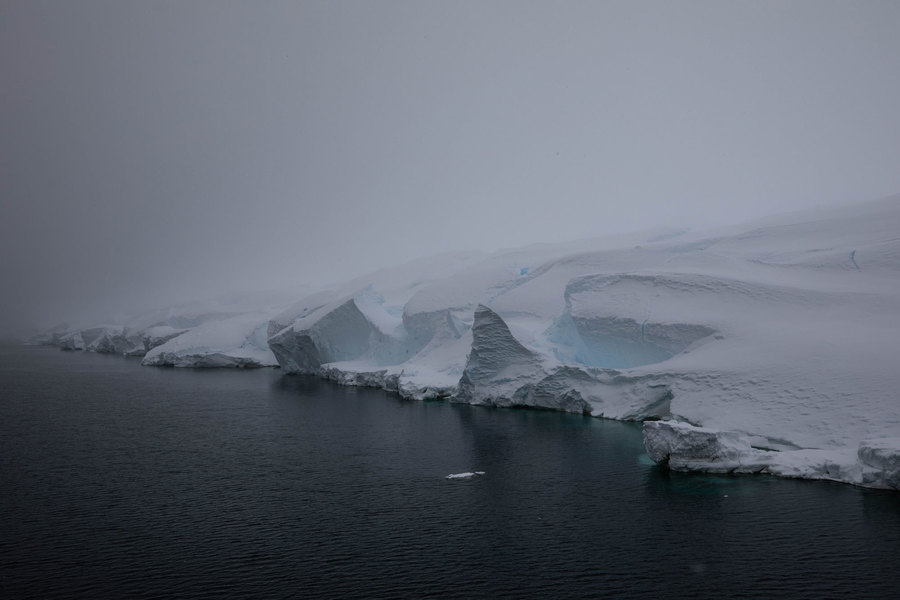 The irregular shapes and downward slope characteristic at the face of much of Thwaites Glacier are signs of its instability. Crevasses and low points mark sites where future icebergs may calve, or where ice has broken off and frozen back together.

Thwaites Glacier starts on land and flows into the Amundsen Sea, forming a vast shelf of ice floating over a cavity of water that's never been directly studied before.

“We know more about the moon than this particular part of Earth,” says Anna Wahlin, an oceanographer from the University of Gothenburg who hopes to send an automated submarine near the front of Thwaites on this expedition. 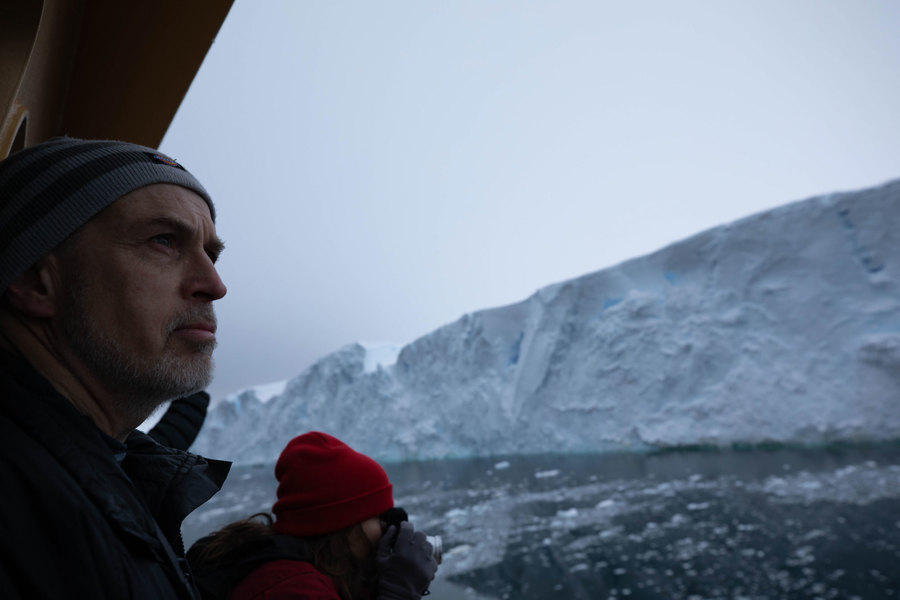 Chief scientist Rob Larter looks out at the glacier on the morning of arrival.

“This is a critical boundary in the world today,” said Chief Scientist Rob Larter of the British Antarctic Survey, looking out at the glacier on the morning of arrival.

”This is where rapid change is really happening, and we’re actually standing and looking at the bit that’s rapidly changing.” 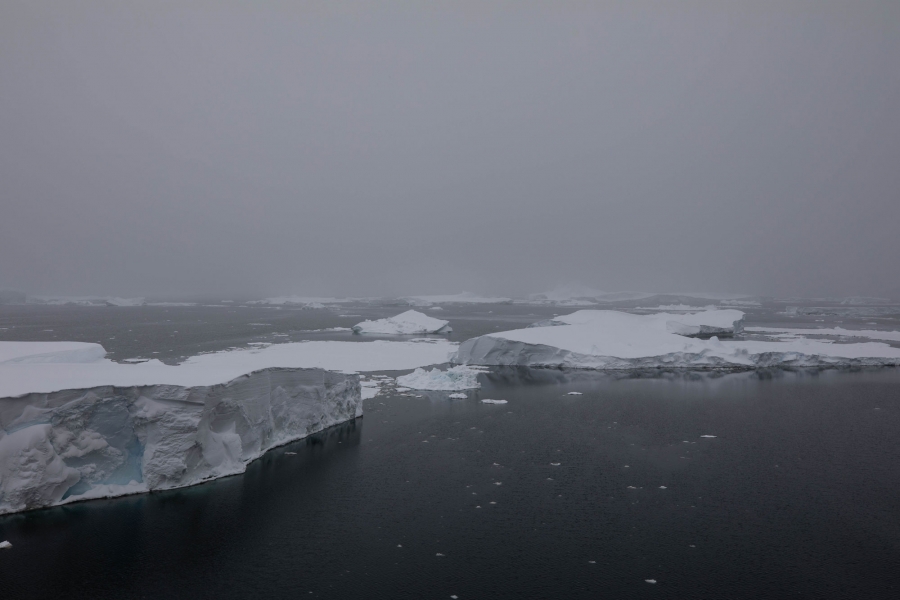 Sea ice and icebergs broken off of Thwaites were blown westward by recent storms, compacting them west of the main glacier faces and allowing the Nathaniel B. Palmer to reach areas never before studied.