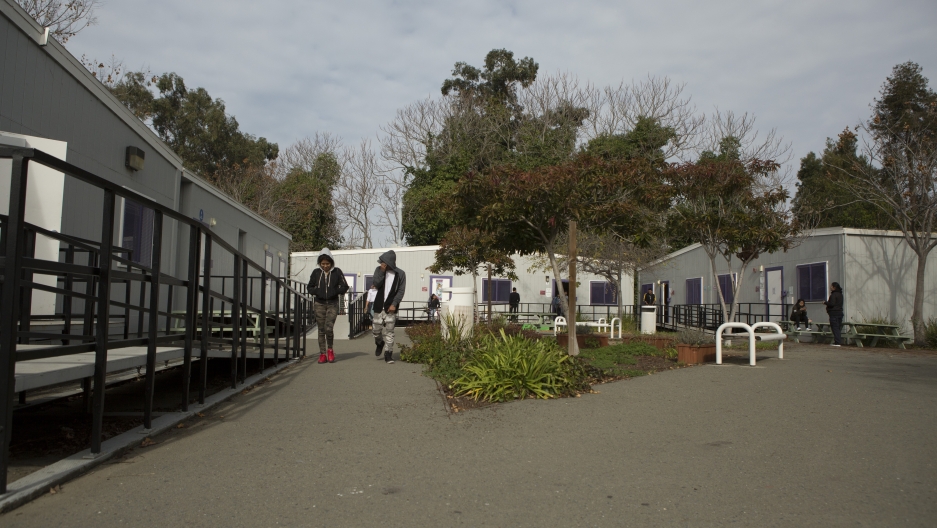 Students walk through the courtyard during lunch at Rudsdale Newcomer High School in Oakland, California, Jan. 28, 2019.

When a young woman from Honduras crossed a stage in Oakland, California, last June to receive her high school diploma, it wasn’t just any graduation. She had escaped gang violence in her home country, Honduras, and kidnapping in Mexico on the journey north, then endured detention after crossing the border and asking for asylum.

After arriving in Oakland, she attended three different high schools, before finally graduating from Rudsdale Newcomer High School, a continuation school opened in 2017 by Oakland Unified School district tailored toward newcomer students like her.

“I could have dropped out two years before, but I wanted to get my diploma, and especially learn the language because, with that, you can go farther."

“I could have dropped out two years before, but I wanted to get my diploma, and especially learn the language because, with that, you can go farther,” she said in Spanish.

She asked only to use her middle name, Yamileth, because she is still afraid of the gang that targeted her family.

Hundreds of thousands of teenagers and children from Central America have come to the United States since 2014, fleeing violence and extreme poverty in their home countries. They’ve enrolled in school districts across the country, but they often face a daunting set of obstacles to graduate high school, enroll in college or prepare for careers.

Often, these teens have to work to pay for their own rent or help with family expenses.  High school can be overwhelming for them. They often deal with being older than other students when they start high school, having survived severe trauma or missed years of school in their home countries.

Read: When war keeps students from starting high school on time, should they be allowed an extra year?

When Yamileth arrived in Oakland, California, from Honduras, in the spring of 2015, she was 17. She was already in the middle of her senior year of high school back in Honduras. In Oakland, the district enrolled her in ninth grade, because she didn’t speak English and had no school records with her. But a few months after starting school, Yamileth stopped going to class. Another student had taken to insulting her, calling her “enana,” or dwarf, then pulling her hair and beating her up.

Eventually, she was able to transfer to Oakland International High School, a school with students from all over the world, with an intense focus on English development and academic content. Yamileth loved it, but she was behind, and time was running out.

A law passed last fall in California allows newly arrived immigrant students to enroll in a fifth year of high school if needed, but they still need to finish before they turn 21. When Yamileth was about to turn 20 and only in her second full year of high school, she realized there was no way she could get enough credits to graduate in time.

That was when Oakland Unified offered her a new option: a continuation school just for immigrant students who are 16 or older, have been in the US for fewer than three years, and who need to work or care for their families.

“Before Rudsdale she wouldn't be a student we would send to continuation school because maybe her English wasn't strong enough, but now we have this opportunity,” said Elizabeth Paniagua, a counselor at Oakland International High School.

Alameda County has received the second-largest number of unaccompanied minors in California, second only to Los Angeles. The largest school district in the county, Oakland Unified School District, experienced a spike in newcomer students in high school from 575 students in 2013 to 2014 to 1,337 students in 2017 to 2018, according to district officials. The district responded by opening up new programs, hiring a coordinator to track and support those students who had crossed the border alone and working to connect students to legal services and mental health therapy.

It became clear that these students are more likely than others to drop out before finishing high school. Teachers would suddenly not hear from students again and have no idea what happened to them, or find them serving food at a local restaurant instead of in class.

“What we were seeing was that students were having to chose basically between work and school, so there would be some students who might be truant for, like, two weeks, a month, a whole marking period or a semester."

“What we were seeing was that students were having to chose basically between work and school, so there would be some students who might be truant for, like, two weeks, a month, a whole marking period or a semester,” said Acacia WoodsChan, who teaches newcomers at Castlemont High School in Oakland, and often refers struggling students to Rusdale.

For students who grew up in the United States and don’t have enough credits to graduate on time, or need more flexible schedules to work, many school districts have continuation schools. But these schools usually don't offer English as second language classes or have staff with expertise in teaching and supporting newcomers.

Classes at Rudsdale are small. School starts an hour later and ends an hour earlier than a traditional high school, with classes starting at 9:30 a.m. and ending at 2:30 p.m. This allows students to get to work in the afternoon, and to sleep in after working late at night. There’s no homework. And credits are earned on a six-week cycle, allowing students to constantly assess their progress toward graduation.

It’s a schedule that worked for Yamileth, who was also working as a dishwasher in a restaurant while going to school. Sometimes she didn’t get off work until 11 p.m. and wouldn’t get home until midnight. Sometimes, she says, she would miss four days of school in a row.

“But I didn’t stop my studies,” she said in Spanish. “When I would come back to school, I would find out how far I was behind and I would go early to make up my work.” 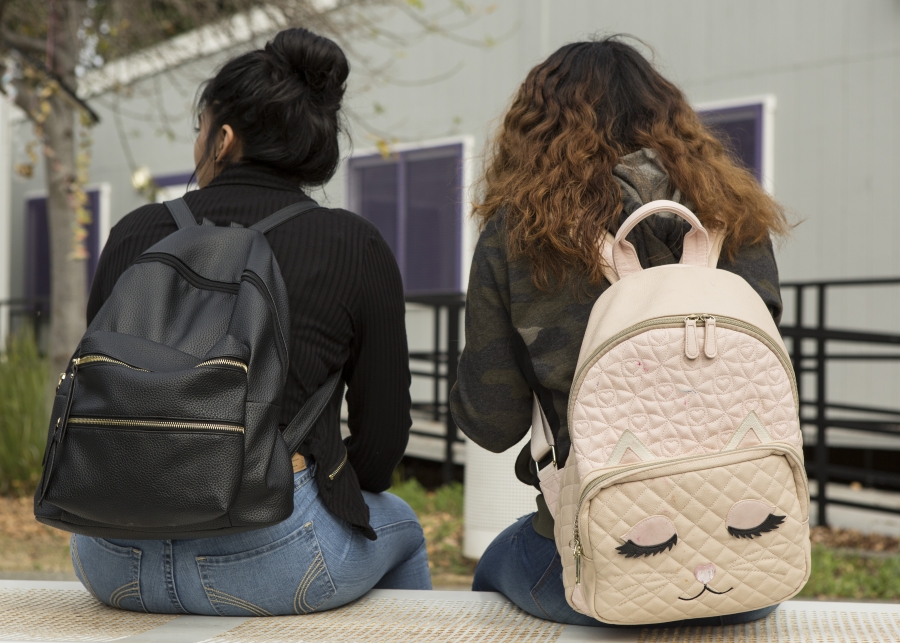 “We’re constantly talking to the students about, ‘Let us know if your schedule changes, we can put you on independent study for a short time, or we can work something out. Let us figure out a plan together. Don’t just drop off the face of the earth."

Assistant Principal Emma Batten-Bowman says getting students to show up to class is a big challenge, but she and other staff try to offer flexibility, allowing a student who is a mother to go home and breastfeed between classes, for example, or giving students time off.

“We’re constantly talking to the students about, ‘Let us know if your schedule changes, we can put you on independent study for a short time, or we can work something out. Let us figure out a plan together. Don’t just drop off the face of the earth,’” Batten-Bowman said.

One of the biggest challenges for many recent newcomers from Central America is missed years of schooling in their home countries, either because they lived in rural communities where junior high or high school was not available, or because it was dangerous to attend school because of gangs. When newcomers haven’t yet mastered academic reading, writing, or math in their home language, they have a lot more to learn in order to grasp high-school level material.

“Not only do they need to practice phonics, but they need to learn how to read a map. They need to know, like, you put the holes on the left and write your name on the right, some basic school skills organization,” Batten-Bowman said.

The school also offers some internships to improve students’ work skills. Some students interned this year at a local hospital and school leaders are looking into another internship at a dental clinic, where students could use their language skills in Spanish or Mam, an Indigenous language from Guatemala.

Learn more: In this California classroom, students teach each other their home languages — and learn acceptance

Etienne Torres, who teaches newcomers at Castlemont High School, says Rudsdale has made a huge difference for some students. He sees a lot of students get frustrated with the pace of learning English at Castlemont and feeling they will never finish high school. He ran into a former student who had transferred to Rudsdale and the difference was palpable.

“He was sharing he had an internship in a hospital and he was super excited. I never saw him that excited about education when I had him for a whole year,” Torres said.

Yamileth enrolled in a dog care elective, where newcomer students spent time every week at a farmhouse where mistreated pit bulls are rehabilitated with loving care.

In June 2018, Yamileth finally graduated days before her 21st birthday. That same month, she won her asylum case to stay in the US.

A few months later, she returned to Oakland International High School to seek out an old counselor to ask for help registering for cosmetology classes at a local community college. The steps proved somewhat daunting — at the college, someone asked Yamileth about her immigration status and asked her for more paperwork. The interaction left Yamileth thinking she might have to pay more than she could afford for classes and she decided she would wait to register until she has her green card.

Still, Yamileth says she’s made it this far, and she isn’t ready to give up.

She fled beatings in Honduras after her mother refused to pay gang members a portion of her revenue from a clothing business. On the journey north, in Mexico, Yamileth, her mother and little brother were kidnapped at a bus station and held by a group of people who claimed to part of a drug cartel. One day, when their captors had gone out to collect ransom money for another captive, they were able to escape. Yamileth says it was an act of God — she was the one who found the door unlocked and told her mother and brother to run as fast as they could. She didn't join them until she was sure it was safe.

“Since God gave me the opportunity to be here,” she said in Spanish, “I have to make the most of that, most of all for my mom, for her future and for mine.”

She wants to open her own business. She says she’s always had a good head for it, helping her mother sell clothes and food back in Honduras from the time she was nine. Maybe she’ll open her own beauty parlor. Or maybe a restaurant. Or maybe she’ll become a veterinarian, drawing on the dog-care skills she learned at Rudsdale.

It feels like her whole future could open up.