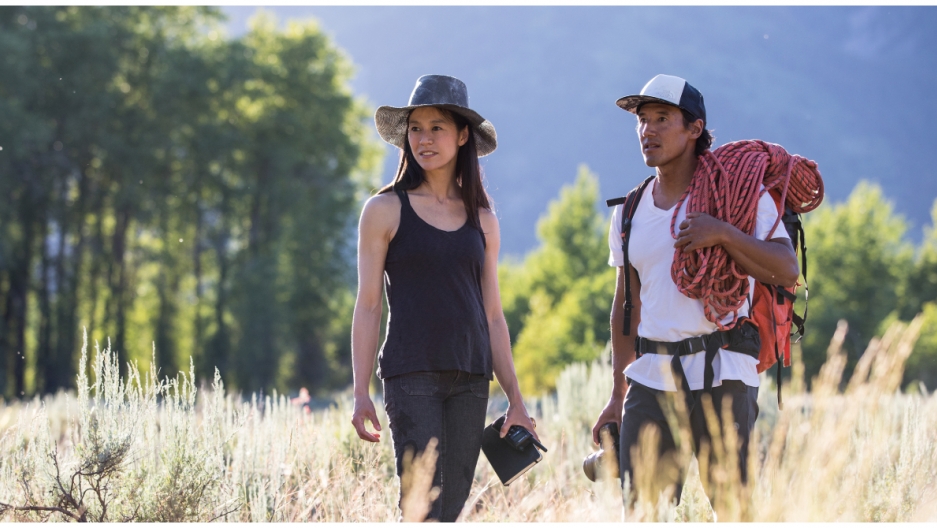 Jimmy Chin and Chai Vasarhelyi on location during the filming of "Free Solo."

One Oscar nominee that's gotten a lot of attention is the documentary “Free Solo." It's about rock climber Alex Honnold and his epic climb up Yosemite's massive granite monolith, El Capitan. Honnold spider-manned up the 3,000-foot granite wall, without ropes or safety gear. "Free Solo" is nominated for Best Documentary in the Academy Awards.

And while Honnold's achievement is stunning, the team behind the camera has their own stories to tell. Chai Vasarhelyi and Jimmy Chin, the husband and wife directors of “Free Solo,” have been adjusting to their newfound fame.

Vasarhelyi's background in is documentaries shot in troubled regions around the world. Chin is a world-class mountain climber and videographer. Their previous collaboration, "Meru," was shot above 20,000 feet in the Himalayas. “Meru” showed the harrowing risks that Jimmy and two climbing partners took to be the first people to reach the summit of Meru.

Vasarhelyi and Chin spoke to The World's Marco Werman about how they look at personal risk for themselves and their film subjects.

Marco Werman: We'll start with "Free Solo." What would you say, Jimmy, is the difference between elite climbers — like the top 1 percent of climbers — and Alex [Honnold].

Jimmy Chin: I would say the most distinct difference is Alex's capacity to manage fear and be able to execute perfectly when the stakes are as high as they are.

You've taken some pretty serious risks as well. What's the difference between you and Alex?

Chai Vasarhelyi: I don't know if you can really compare them. They're very different.

I'm hearing your wife Chai Vasarhelyi. Is there concern your voice that I'm hearing?

Chai Vasarhelyi: I think it's just very hard to compare. For example, “Meru” chronicles Jimmy, Conrad Anker and Renan Ozturk's expedition to try to climb Mount Meru in the Himalayas. They're out there for 18 days straight with a limited supply of food and at 20,000 feet. It's just a different type of risk.

Jimmy Chin: When we were skiing Everest, there is no margin for error but it's kind of comparing apples and oranges.

“When we skied Everest.” He just drops in casually. Jimmy, in “Meru” you talk about your background as a child of immigrants. Tell me about your parents. What were their expectations of you growing up?

Jimmy Chin: I grew up playing the violin, starting at 3, and studying martial arts and swam competitively from a very young age. So, they're very traditional. They wanted me to be a doctor or a lawyer or go into finance. When I finished university, I moved to Yosemite and started climbing full-time and moved into the back of my car and lived as essentially a climbing bum, ski bum, for seven years.

I was a dirtbag climber and they were quite mortified. But eventually, they came to see that that was a good choice for me. 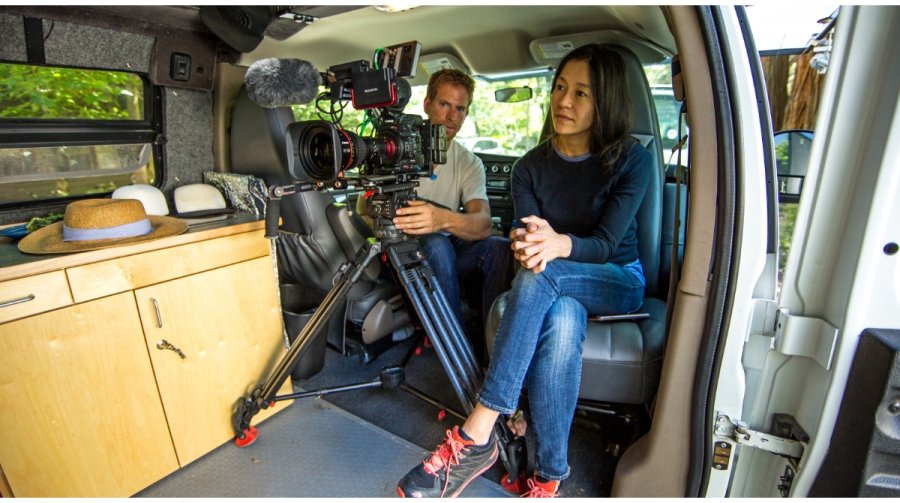 Chai Vasarhelyi prepares to interview Jimmy Chin as cameraman Clair Popkin frames up the shot. Here they are sitting in Chai's van in Yosemite on the set of "Free Solo."

So Chai, you're also first generation. How has that informed your filmmaking?

Chai Vasarhelyi: My father is Hungarian, but grew up in Brazil, and my mom is from Hong Kong. I think it just always reminded me, or I always knew that, there was more out there in the world. Our Chinese background is something that both Jimmy and I share, which is kind of a funny thing because I think we both understand what it's like to be really pushed by our parents. Academic excellence, this idea of being a doctor or a lawyer or playing an instrument, all very familiar to both of us.

Despite that exposure and those experiences growing up though Chai, you made your first film in college and then it went on to win at Tribeca. That was a movie that followed a group of 20-somethings in Kosovo during the Bosnian war. How did that film come about?

Chai Vasarhelyi: Both sides of my family had to flee their home countries because of religious or ideological persecution. So, I was kind of obsessed with those questions and also how do you represent such questions. So, when the war in Kosovo broke out in the middle of Europe, there was genocide in the middle of Europe in the early 21st century, that seemed like an urgent question. I was very idealistic and probably dumb that, you know, I went there. I was a kid, I was 19 and I went into a war zone. But I understand why I was compelled to go and that film, the people I met there, the subjects of "A Normal Life," their experiences, are different from mine just because of a passport. They're just as intelligent; they're just as worldly; they just were born in a different place and subjected to political persecution. So it was a very important experience for me.

There is a risk — mountain climbing and going into a war zone. How do both of you, Chai and Jimmy, negotiate risk, negotiate each other's risk, negotiate your own risk, and how does having children enter into those calculations? 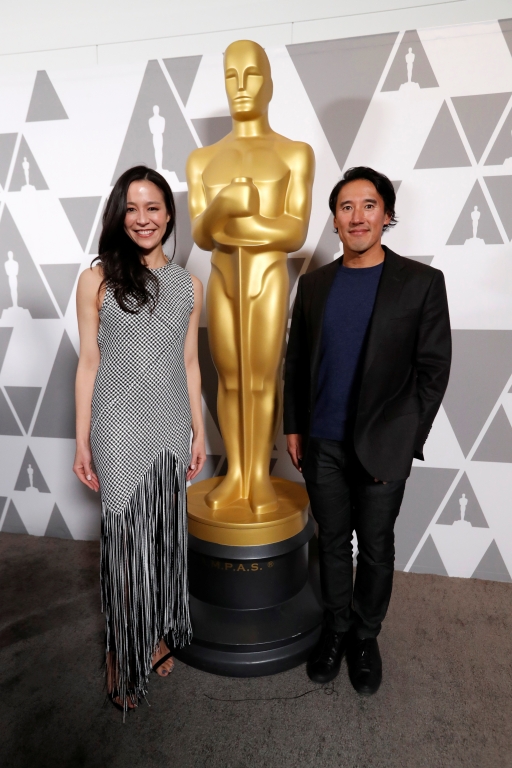 Chai Vasarhelyi and Jimmy Chin from "Free Solo" at a reception for Oscar-nominated documentary films in Los Angeles, California, on Feb. 19 2019.

Chai Vasarhelyi: Well, in terms of "Free Solo" the idea of risk is at the heart of the film. This idea that, if by filming Alex are we likely to distract him and is he more likely to fall? And it came down to whether or not we believed in Alex and what he was doing.

I think that any film you make, you have to believe in the story you're trying to tell. And for me, I think for both of us, the story has got to make the world a little bit better. It's got to show a different point of view; it has to advance an alternate vision that people are unaware of, that's going to make our community a little bit better.

What compelled me to go to war zones when I was younger was to tell a story that had been forgotten. Now it's different. Jimmy and I have two kids. So the risks I'm willing to personally take have changed radically. But I had a great first 35 years.

Alex Honnold, he's more interested in fulfilling his passion than whether he lives or dies tomorrow. I mean, how does filming someone who has that mindset make the world a better place?

Chai Vasarhelyi: I think that it's not that he's more interested in. What it is is that trying to climb El Capitan and putting in the work is his dream, right? He does not want to die. So if he thinks he's going to die, he's not going to go up there. But should he die, he was willing to take that risk because the dream was important enough for him. And for us, Alex's story is really about the courage to work really, really, really hard and dedicate yourself to pursuing your dream because then anything is possible. 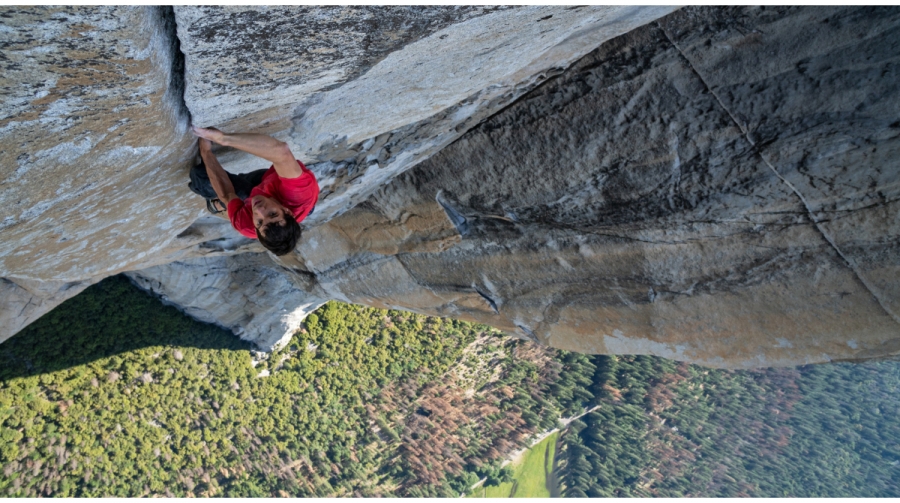 Jimmy Chin: And I also think that it's not a story about a daredevil who has a death wish. The story for us originated from the idea that he was a very awkward loner misfit that is terribly shy. And he started free soloing because he loved climbing, but he found it less scary to go climb on his own without a rope than to go connect with somebody and ask them to be his climbing partner. That idea that someone could have that kind of fear and methodically work through it because he or she would want to be better — that story was really important to us.

Editor's note: This interview has been edited and condensed for clarity.