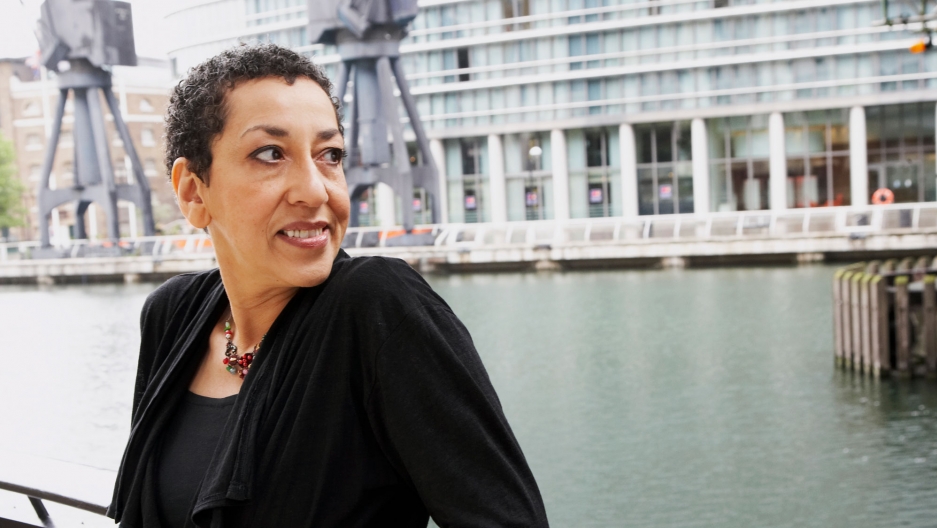 Andrea Levy, who died Feb. 14, 2019 at age 62, was a celebrated British author. Her books explored the lives of the Windrush generation of immigrants from the Caribbean to Britain, and reflected part of her own family history.

For Andrea Levy, writing began as a hobby taken up later in life.

“I just started by doing an evening class and seeing how it would go,” she told the BBC in 2014. “I found that I liked it.”

Levy, who died Feb. 14 of cancer at age 62, became a celebrated British author by writing what she knew: her family’s experience.

On June 22, 1948, her father was aboard the Empire Windrush as it arrived in Tilbury — becoming the first ship to bring thousands of people to Britain from the West Indies. Britain had colonized the region in the 1600s and 1700s and brought enslaved Africans to work on coffee and sugar plantations. After World War II, Britain desperately needed workers to rebuild the country, and nearly half a million people looking for new opportunities arrived to fill labor shortages. At the time, they were considered British citizens, but records of their arrivals were destroyed, resulting decades later in a controversy over whether members of the “Windrush generation” were in Britain legally.

“They just wanted to find a better opportunity and my mom was desperate to leave Jamaica,” Levy said. “Absolutely desperate.”

They arrived hopeful but soon found white Britons treated them differently because of how they looked and spoke. Eight years after her parents arrived in the UK, Levy was born. She grew up in north London, and her family — which never had much money — thought of itself as white.

"My family is fair-skinned. In Jamaica this had had a big effect on my parents' upbringing, because of the class system, inherited from British colonial times, people took the colour of your skin very seriously."

"My family is fair-skinned. In Jamaica this had had a big effect on my parents' upbringing, because of the class system, inherited from British colonial times, people took the colour of your skin very seriously," Levy wrote in a 2014 essay titled “Back to my own country.”

Levy’s parents were of mixed ancestry, with African, Scottish and Jewish heritage.

“Right up until my mom’s death she found it very hard to say that she was a black person,” Levy said. “She just couldn’t do it.”

Levy studied textile design in college and was a costume assistant for theater and TV. At age 26, she had a revelation in a racial awareness workshop at an Islington sex education project with colleagues, she wrote in her 2014 essay. People were asked to split into white and black groups. Levy went to the white group, where she said she felt most at home. But people from the black group said she belonged with them, so she moved.

Around the same time — the early 1980s — the manager of a BBC drama told Levy actors didn’t want to be dressed by a person of color. Levy said it was the first time she thought of herself as black. She started exploring her identity in a writing class.

“That’s a revelation — that you can have something that relates to you and your life,” Levy said. “Literature is the most fantastic piece of communication you can have.”

Levy became famous in 2005 with her fourth book, “Small Island.” It follows a Jamaican Royal Air Force pilot and his wife, and their British landlords, before and after World War II. The two couples find that although they are both from small islands — Britain and Jamaica — they see things very differently.

Levy thought the book would more or less flop, like her previous novels. But “Small Island” won awards, sold more than a million copies and was the basis for a BBC TV series.

With her next novel, Levy addressed Britain’s slave trading past — a history she said has often gone unmentioned. Between 1662 and 1807, the British abducted and enslaved an estimated 3.1 million Africans to work in the colonies, including the Caribbean.

“I went to a conference and there was a young woman who stood up in the conference and she sort of said, ‘How can I be proud of my history when they were all slaves?’ As if to be a slave was something to be ashamed of. That actually took my breath away."

“I went to a conference and there was a young woman who stood up in the conference and she sort of said, ‘How can I be proud of my history when they were all slaves?’ As if to be a slave was something to be ashamed of. That actually took my breath away,” Levy remembered. “And I thought that was one of the saddest things I’d ever heard. Because there was a history there that was rich and full. It’s just that we know it. And so I thought, ‘Can I make a story that will change her mind?’"

The resulting novel, “The Long Song,” was released in 2010. It follows a young woman named July, who works on a Jamaican plantation and has a child fathered by the plantation master. It was also made into a BBC TV series.

Levy helped drive a discussion about race in Britain and the lasting, painful impact of its empire.

Levy helped drive a discussion about race in Britain and the lasting, painful impact of its empire. A columnist for The Guardian, Gary Younge, wrote in his tribute to Levy that she pushed at every level for “a fuller, more rounded, more inclusive version” of Britain’s story.

And Levy’s influence will live on: “Small Island” is set to premiere as a major stage play this spring.