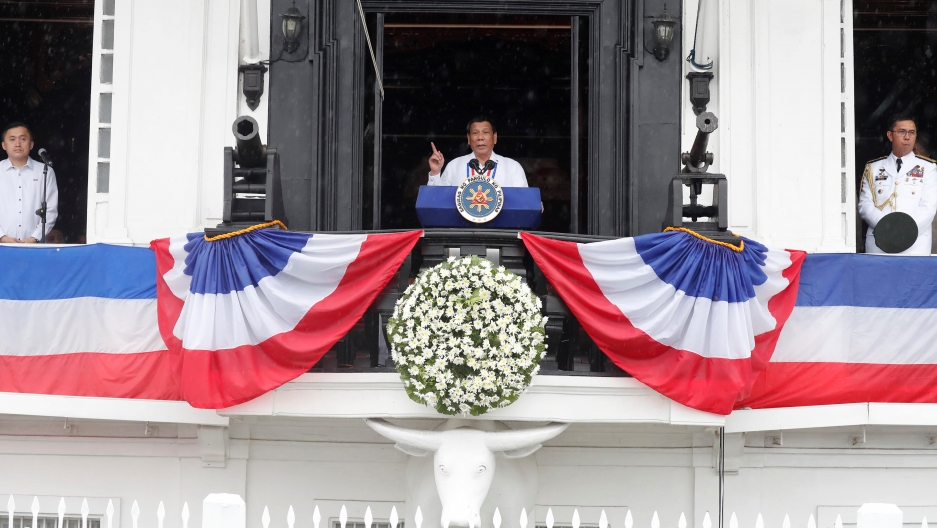 King Philip II, ruler of the Spanish Empire for much of the 1500s, also regarded the archipelago’s inhabitants as inferior. He’d prefer to die 100 times, he said, than become the “ruler of heretics.”

So he sent an army of conquistadors and friars to conquer and convert the islands’ varied peoples, seafaring merchants and hunter-gatherers alike.

The empire’s goal was to smush all of them together under a common identity: Filipinos, subjects of King Philip II (known in Spanish as King Felipe II).

This "origin story" is being revived by Rodrigo Duterte, president of the Philippines and no stranger to startling proposals. His latest: correcting historical wrongs by scrubbing King Philip II from the country’s name.

Related: Does Duterte’s wrath against the Catholic Church have no limit?

“It’s named the Philippines,” he told a crowd last week, “because it was discovered by Magellan using money from King Philip. That’s why, when that stupid explorer came, he named it the Philippines.”

Duterte’s timeline is off — Magellan died three decades before Philip II became king — but his proposal is provocative nonetheless.

It might be ignored as a strange aside from a leader who thrives on shock value. But his administration has since laid out a process for the Philippines’ Congress to potentially push ahead with the idea and, ultimately, submit it to a nationwide vote.

Duterte already has a preferred new name: The Republic of Maharlika.

“Because Maharlika is a Malay word,” Duterte said. “And it means more of a concept of serenity and peace.”

Maharlika is a very old word, derived from Sanskrit and used in the Malay language, which was widespread in the Southeast Asian tropics long before Europeans showed up. But Duterte appears to have seized on an erroneous translation. And he’s hardly the first.

Changing the country’s name to Republic of Maharlika was also favored by Ferdinand Marcos, the US-backed dictator whose iron rule in the 1970s and '80s still looms large in the national consciousness.

In Marcos’ interpretation, the word referred to a lost caste of nobility that inhabited the islands.

“But the way Duterte and Marcos invoke ‘Maharlika’ is wrong,” said Deirdre de la Cruz, a Filipina historian and associate professor of Southeast Asian studies at the University of Michigan.

“It’s actually a term that was used to describe freemen: Someone who is not indentured,” she said. “So the glorification of the word and its association with some grand kingdom is exaggerated by people wanting to evoke a mythical past.”

In the Filipino context, de la Cruz said, “Maharlika” is sometimes used to summon the idea of an idyllic civilization that was spoiled by colonial brutes.

The Spanish Empire did indeed behave brutally. Some of the same viciousness Christopher Columbus brought to the Caribbean — slavery, indoctrination, mass killing — was also visited upon the peoples of the Philippines.

The nation’s modern identity was forged by the Spanish Empire, which spent centuries uniting disparate societies under their reign. But that doesn’t mean the islands were a blank slate before.

There was a state known as Tondo around modern-day Manila. It had no shortage of civilizational achievements: farming tracts, a system of weights and measures relying on gold ingots and trading routes running to kingdoms located in what we now call Thailand, Japan and China.

But reviving a society such as Tondo, and holding it aloft as emblematic of the modern-day Philippines, would totally excise the Muslim sultanates that existed 1,000 miles away in southern islands such as Mindanao.

Same goes for smaller settlements in the central islands, such as the Visayas, where Magellan’s crew found a “peace-loving people” who liked to communally roast pork, throw wine-drenched parties and venerate middle-aged priestesses.

The descendants of each of these groups are now Filipinos — and none are more or less Filipino than the other. Nor were these pre-Philippines societies untouched by foreign influence.

“Before the Spanish arrived, the archipelago was embedded in a maritime trade with a long history of Chinese influence and Islamic influence as well," de la Cruz said. “So this idea that you could go back to the years before 1521 [when Magellan landed] and locate some authentic, indigenous past? Historically, it’s a fallacy.”

It’s difficult to know how hard Duterte will press on this idea. He is prone to inserting wild comments into talks that might otherwise go ignored. His name change proposal, for example, was deployed to spice up a speech on agrarian reform given in a provincial gymnasium.

Lashing out at Spain’s legacy also fits neatly with an ongoing spree of attacks against the Catholic church, an institution Duterte condemns as immoral and out of touch.

“I also notice he [makes shocking statements] when he feels the audience is bored,” said Richard Heydarian, a Manila-based academic and former policy advisor to the Philippines House of Representatives, in an interview with The World last month.

“This is where he’s kind of Trump-ish,” Heydarian said. “He knows the audience is looking for a bombshell. So he gives it to them.”

But Duterte’s sudden interest in changing the country’s name, de la Cruz said, might force a larger question for Filipinos.

“Why do authoritarian leaders have to reach into a pre-colonial past?” she says. “Blaming colonial tyranny … is a convenient way to absolve oneself of any accountability for the present.”

She isn’t in favor of changing the name of the Philippines because, at this point, the name hardly exalts the Spanish empire.

“Filipinos are incredible at taking what is from elsewhere and making it their own … so Filipinos own it now.”

“Honestly,” de la Cruz said, “most Filipinos have a lot more to worry about than being haunted by the ghost of King Philip.”