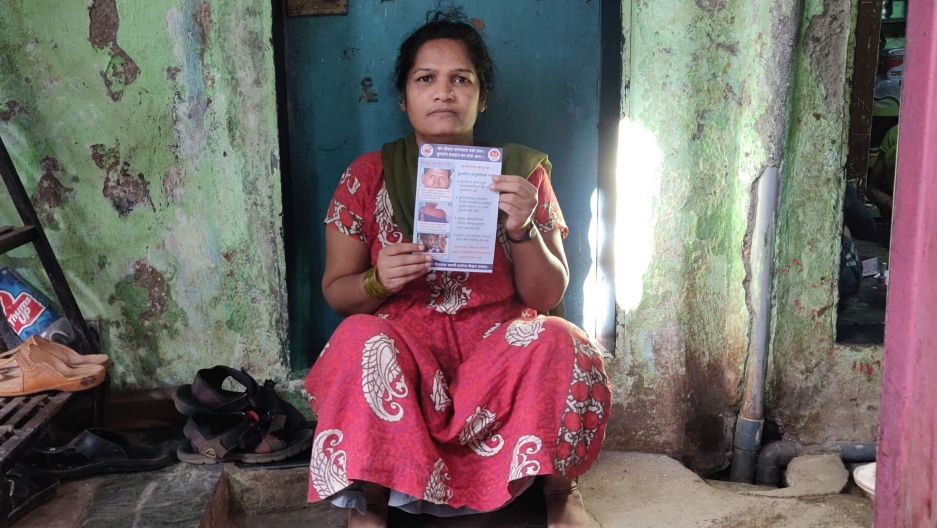 A woman holds an information pamphlet on leprosy during Bombay Leprosy Project's detection and awareness drive in Dharavi Slum in Mumbai, India.

Vittal, 63, has traveled over 64 miles from home to visit a leprosy clinic in Sion, a congested neighborhood of suburban Mumbai, India. Health volunteers often make visits to rural areas to detect leprosy cases, but it's easy to fall through the cracks.

“I don’t know if the health officers came [to my] home for the check-up,” says Vittal, a paddy farmer who lives in the Raigad district of Maharastra, a northwestern state in India with the third most cases of leprosy in the country. “Maybe they did when I was at the fields.”

Leprosy is a chronic infectious disease caused by Mycobacterium leprae, mostly found in warm tropical regions. It often results in severe, disfiguring skin sores and nerve damage affecting the limbs and skin. Though it’s not deadly, it can be contagious and the social stigma of leprosy, devastating.

Vittal was infected for several months before he decided to visit a doctor. He requested to not to use his full name to shield his identity due to the extreme stigma he fears he'll face if his family finds out about his condition.

His case represents two disparate narratives about leprosy in India — that of non-existence and increased prevalence. In 2005, India declared that it had eliminated leprosy as a public health concern. A decade after achieving elimination status, India accounted for 60 percent of the global total of new leprosy cases.

Now, a recent report by the Central Leprosy Division issued by India's Ministry of Health and Family Welfare announced that 135,485 new leprosy cases were detected in 2017 — which means that for every four minutes, one person is diagnosed with leprosy in India.

Vittal, 63, gets a leprosy check-up at the Bombay Leprosy Project.

The elimination of leprosy has been a longstanding mirage.

“It is well recognized in leprosy platforms of India that elimination was never actually achieved."

“It is well recognized in leprosy platforms of India that elimination was never actually achieved,” says Ashim Chowla the chief executive officer of Lepra Society in Secundrabad, a city in the southern state of Telangana.

Staff at various leprosy nongovernmental organizations who spoke to The World (who requested anonymity because they work closely with the government) agreed that authorities hurriedly claimed elimination status to save face in front of World Health Organization funders and the larger international community.

In the public space, elimination was confused with eradication. Elimination implies a prevalence rate of less than one case per 10,000 (0.01 percent), according to the WHO, whereas eradication means reaching zero — no infections with no possibility of further transmission.

To reach the number of cases required for elimination status, India calculated the average of leprosy cases prevalent in all states — irrespective of wide gaps in highly endemic and non-endemic regions. But leprosy has a long incubation period — an average of six years. So cases detected after 2005 had a knock-on effect on the elimination ratio. In India, where one district alone can have millions of people, a 0.01 prevalence still results in thousands of cases.

“That spelled doomsday for leprosy,” confesses Chowla. The merger also meant many of the funds and manpower allocated to leprosy were diverted to other health departments.

A similar trend was also seen globally. “The elimination status proved as an obstacle in raising funds from supporting countries,” says Nikita Sarah, head of advocacy and communications at The Leprosy Mission in India. “They didn’t think leprosy was a cause of concern in India anymore.”

The first alarm bells rang in 2016 when the health ministry launched the country’s largest leprosy detection campaign. Under Anil Kumar, director of the National Leprosy Eradication Program, the campaign spread across 149 districts of India, covering a population of 320 million people. At the end of the two-week campaign, 34,000 new cases had been detected. Since then, leprosy has been on the rise.

“These numbers must be understood in all its complexities,” explains Chowla. “The increase of leprosy cases in the past two years is because now the disease is being reported more than ever. The narrative of elimination in the government has finally been thrown away.”

Leprosy remains in the shadows as a public health priority.

Each ASHA covers 1,000 people in rural areas and up to 2,500 people in urban areas. Paid by the government, ASHAs only earn $4 for each detected leprosy case, whereas bringing in a pregnant woman for institutional delivery could fetch $16 — more than half the monthly salary for an ASHA.

Dr. Vivek Pai, director of the Bombay Leprosy Project in Mumbai, feels that apart from a heavy workload and low incentives, ASHAs lack skilled training in leprosy. “They only know how to identify skin lesions as markers of leprosy,” he says. “Those are satellite cases where the disease has considerably spread. They must diagnose primary cases to stop leprosy from spreading in the community.” In the absence of a vaccine, early detection and treatment is the only way to curb its rise.

In late 2016, the NLEP issued a midterm evaluation that painted a bleak picture, reporting a “heightened case of disability” due to leprosy, which “indicated that cases were being detected late.” Almost 3 million people in India live with leprosy-related deformities.

Chowla agrees that medical training on leprosy diagnosis is lacking. “Leprosy education takes a backseat in both private and public medical colleges,” he says. “Most general practitioners, who are the first entry point in health for people, are unable to diagnose leprosy.”

Hidden cases tend to thrive because leprosy stigma runs deep. India’s 750 “leprosy colonies” house approximately 200 thousand people who live on the margins of society because of misconceptions around the disease. Contrary to popular belief, leprosy is not a deadly disease. In fact, it takes years of living in close proximity to an untreated leprosy patient to catch it, but deep fears and negative associations cause isolation among leprosy sufferers.

Multi-drug therapy can cure leprosy at any stage, killing 98 percent of the bacteria in the body with its first dose. And it’s available for free in India's government hospitals and dispensaries. Health activists say that India has a sufficient supply of MDT. But incorrect and delayed diagnoses, along with stigma, keep patients from accessing medical treatment.

“Patients visit religious sites, spiritual leaders and quacks looking for a cure before they even visit a doctor,” says Sarah. “There is a belief in India that leprosy is a sin of one’s past births.”

While Kumar agrees that education and awareness are crucial to bringing down the number of cases, he finds it cost prohibitive. “HIV/AIDS receives funds worth [$20 billion] from the government,” Kumar says. “Whereas leprosy, also a stigmatized disease is granted only [$460 million].”

Can India ever achieve real leprosy elimination? For Chowla the success of the leprosy mission in India relies on destigmatization. “It needs to be treated like nothing but an ordinary cold,” he says. “For this, all stakeholders need to rally around it.”

“Patients visit religious sites, spiritual leaders and quacks looking for a cure before they even visit a doctor. ... There is a belief in India that leprosy is a sin of one’s past births.”

In a historic move, the Lok Sabha, India's lower house of parliament, passed a bill in January this year removing leprosy as grounds for divorce. This struck down one of the 119 discriminatory laws against leprosy patients in India, which include barring patients from standing for elections and charging them higher health insurance premiums. 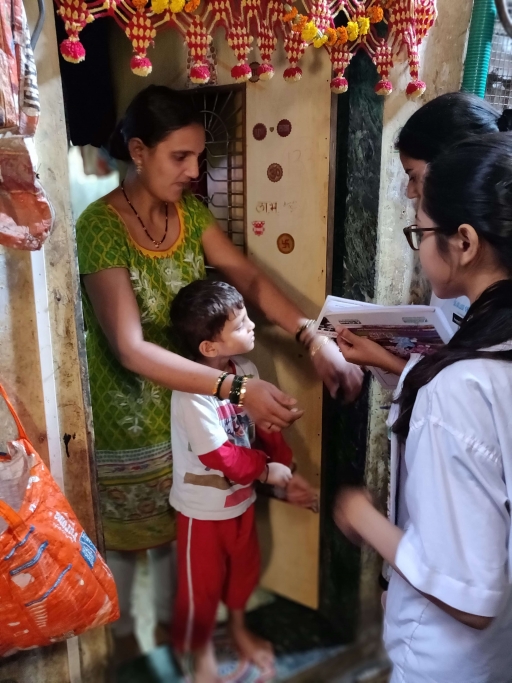 A woman talks with students from Yerala Medical College who are conducting a leprosy detection and awareness drive in collaboration with Bombay Leprosy Project at Dharavi Slum, Mumbai, India.

Sarah has also found a shift in social attitudes toward leprosy. “Those who have recovered from the disease are finally coming forward to champion its cause,” she says. “A few years ago these very people would have never come out about their leprosy publically.”

Leprosy has also gained priority with the United Nations, who recently appointed a special rapporteur on the elimination of discrimination against persons affected by leprosy and their family members.

However, these positive developments do little to reassure Vittal, who is facing a rare reoccurrence of leprosy. The news of his disease will be kept secret from family and neighbors — just like 25 years ago when he first contracted it.

“I was so happy without this disease in my life,” he says. “Why has it come back to me, again?”

Editor's note: An earlier version of this story used the term ASHA interchangeably with students and health activists. Each are separate but cooperating groups striving to detect and end leprosy in India.