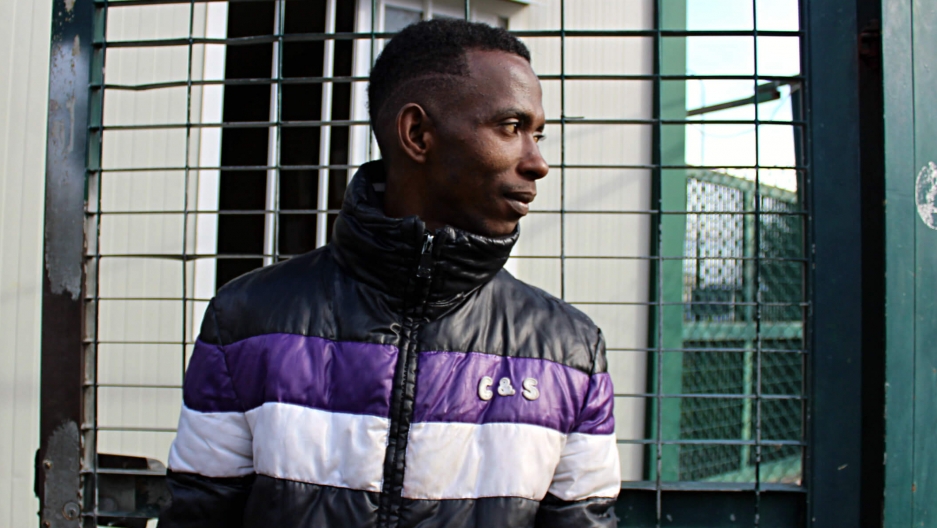 Yaya Barry arrived in Italy two years ago from Guinea after fleeing political persecution. He began to rebuild his life while staying at a refugee center near Rome. Now, under the "Salvini Decree," Barry faces eviction, along with thousands of other asylum-seekers.

Last week, Yaya Barry left his home in the small Italian suburb of Castelnuovo di Porto when it was still dark, as he did every morning, to go to work in Rome. It was a long commute to a tough job — handing out flyers and putting up posters — but it had taken him months to find work, and he was grateful.

That night, when he returned to the large refugee center he’s called home for the past two years — about 30 kilometers from Rome — he noticed a flurry of activity. Some people were packing their bags, others were making frantic phone calls to their lawyers or friends. A few were in tears.

“My name was on a list, and I was told I would be taken away the next day, but they didn’t tell me where I was going."

“That’s how I found out the center was closing, and we had to leave. […] My name was on a list, and I was told I would be taken away the next day, but they didn’t tell me where I was going,” says Barry, 31, who fled from Guinea after being arrested for attending an opposition rally in 2015.

Like Barry, the 535 inhabitants of Castelnuovo di Porto refugee center — the second largest of its kind in Italy — were only warned a day or two in advance of their impending move, and they were not given details on where they were going. All they knew was that some would be sent to various migrant and refugee centers throughout Italy. 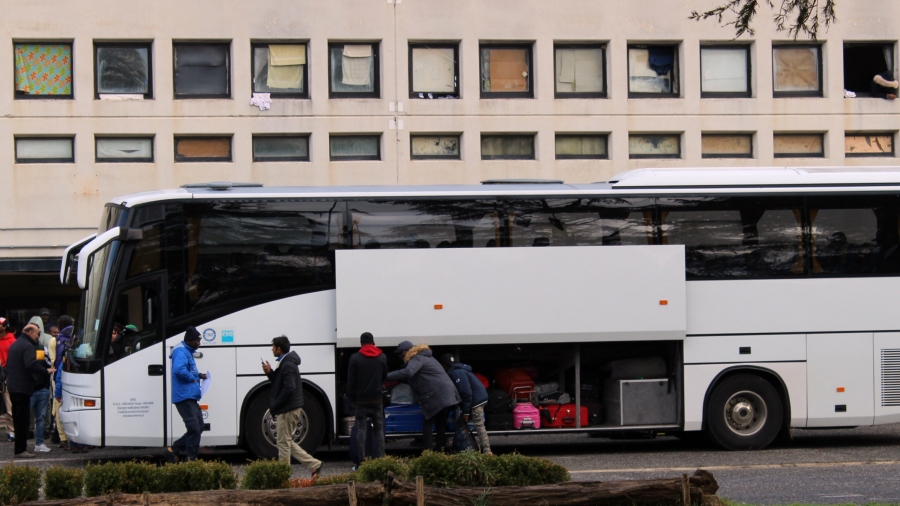 Refugees and asylum seekers were told suddenly that they had to leave Castelnuovo di Porto refugee center near Rome, but they were not told where they were going or when they would leave exactly.

The sudden and forced evictions from Castelnuovo di Porto are a direct result of the so-called "security decree," also known as the “Salvini decree,” which was adopted in November 2018 and is named after far-right politician Matteo Salvini, Italy’s interior minister and leader of the right-wing League party.

The decree, among other things, cracks down on asylum-seekers’ rights by abolishing “humanitarian protection” residency permits — issued to asylum-seekers who do not qualify for refugee status but are deemed vulnerable and therefore permitted to stay in Italy. The decree says these humanitarian permit holders are no longer eligible for assistance, which means that some people evicted from Castelnuovo — around 150 according to some sources — have lost their right to accommodation, and are now effectively homeless.

Salvini called the decree a “gift to Italians,” and said in a Facebook post that the new rules would help “reduce the costs of exaggerated migration, expel more quickly criminals and fake refugees [and] strip the citizenship of terrorists” — improving security in Italy.

But critics believe the decree will have the opposite effect by pushing vulnerable people to the margins of society and giving them no hope of legally working or staying in Italy.

With Italy’s right-wing populist government adopting increasingly anti-immigration policies, the closure of Castelnuovo is seen by many as ominous. The remaining four centers in Italy are set to close in coming months, pushing thousands stripped of their humanitarian permits to live on the streets. By abolishing these permits, the Salvini decree will cause thousands more to become “irregulars” — illegal immigrants —  making it impossible to work legally, rent a home or continue with education.

'Trauma within a trauma'

The closure came as a surprise to the staff.

“The prefecture called on Friday telling us that we would be closed by the end of the month,” says Costanza Fittipaldi, who works as a legal adviser at the center.

“We were told to prepare lists: 35 people were to leave on Tuesday, 75 more on Wednesday and so on,” she says with a shudder. “As if these people were just objects. There is absolutely no logic to it. If there is, it’s a perverse one."

“We were told to prepare lists ...  As if these people were just objects. There is absolutely no logic to it. If there is, it’s a perverse one."

Over the last 10 years, around 8,000 asylum-seekers, mostly from West African countries, as well as from Pakistan and Afghanistan, have passed through the center, says Castelnuovo di Porto’s Mayor Riccardo Travaglini, who has openly and heavily criticized the way the move has been managed: “We were not given any warning,” he says. “These people are successfully integrated, they are part of our community. To do this is to destroy years of work,” Travaglini told The World.

The move will be especially difficult for some residents of Castelnuovo di Porto: “Some of our guests are in extremely difficult situations; we have women who have escaped the sex trade, and people who have survived torture and abuse in their home countries and in Libya,” explains Fittipaldi.

Many of the refugees in Castelnuovo di Porto arrived in Italy after treacherous journeys through the Mediterranean from Libya, where human rights abuses are well-documented, and people have been systematically subjected to "unimaginable horrors,” according to the United Nations Support Mission in Libya.

Last week, Doctors Without Borders (MSF) said that some forced to relocate are patients from their Center for Victims of Torture and that this move risked disrupting a delicate process of rehabilitation and integration.

“Here, they had a chance at rebuilding their lives,” says Francesca Maurizi, a psychologist who has worked at the center for nearly five years. “This is a trauma within a trauma for them,” sayd Maurizi, fighting back tears while saying goodbye to one of her patients as he boards a bus, not knowing where he is headed.

When he asks whether he’ll be able to attend the university classes he’s just started, she has no answer for him. 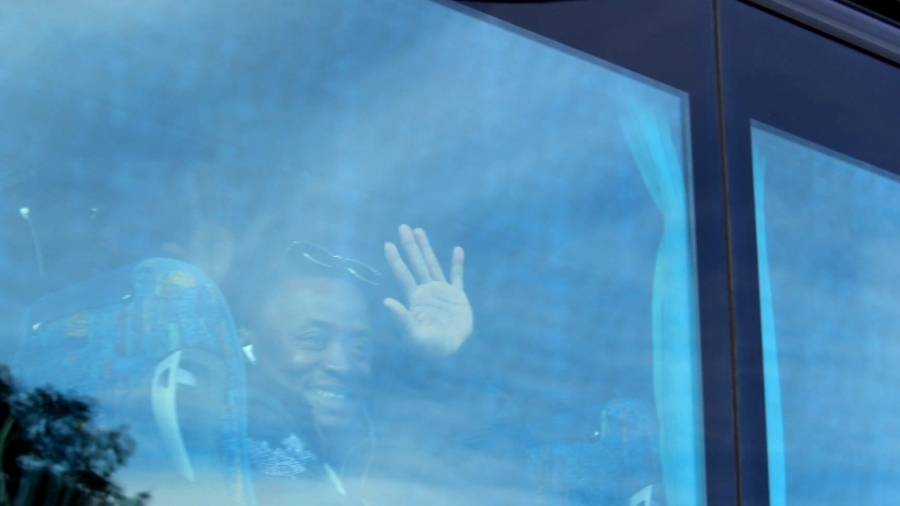 A Castelnuovo di Porto resident waves goodbye from the bus. The "Salvini decree" led to forced evictions of thousands of refugees and asylum-seekers, but very few know exactly where they are going or what will happen next.

Lamin Sana, 20, from Senegal, also struggles to come to terms with the sudden move.

“I came here alone, but I found friends. My best friend lives here too, we do everything together, like brothers. I still don’t know where they will send him. Today is a sad day,” Sana said on eviction day. Like many young people in the center, Sana has started school again and plays football with the local team. “I don’t know what to say, except that I feel really sad.”

Like many others, Sana and Barry are asylum-seekers, meaning they are waiting and hoping for a determination on their legal status by the Italian government. But this is a lengthy bureaucratic process which can take months, even years, and being transferred to other migrant centers in far-away regions will no doubt further hinder the process.

“If their case has already been seen by a local commission, it will be moved to their new location, but this can take months; if they are appealing a decision, they will have to travel back to Rome, which for obvious reasons won’t be easy. In any case, such a move will cause huge upset in anyone’s life.”

“It depends at what point of the process the asylum seeker is,” explains Salvatore Fachile, a lawyer with the Association for Juridical Research about Migration (ASGI). “If their case has already been seen by a local commission, it will be moved to their new location, but this can take months; if they are appealing a decision, they will have to travel back to Rome, which for obvious reasons won’t be easy. In any case, such a move will cause huge upset in anyone’s life.” 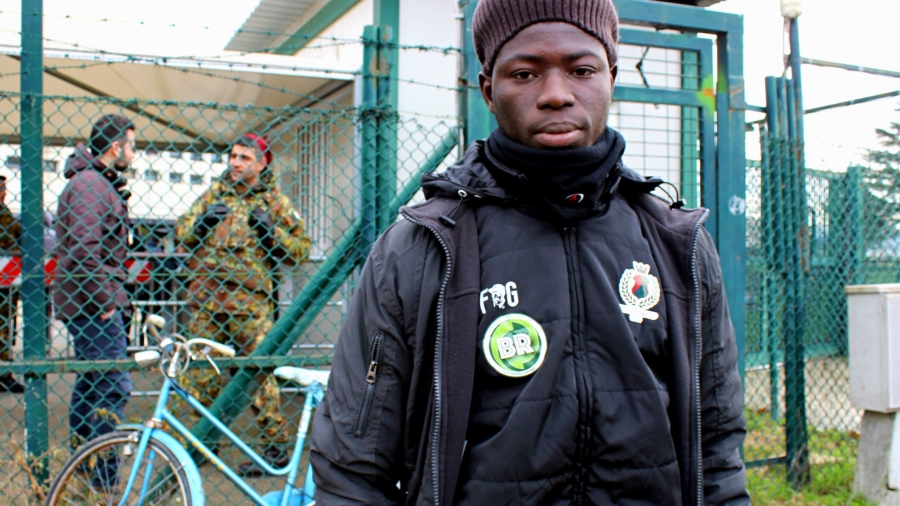 Lamin Sana, 20, from Senegal, came to Italy alone but soon found friends at the refugee center. “My best friend lives here too, we do everything together, like brothers. I still don’t know where they will send him. Today is a sad day,” Sana said on eviction day.

Barry, whose lawyer is in Rome, fears the move will leave him in legal limbo.

“I just lost my job, I lost everything," he says. "How will I travel back for my court dates?” He doesn’t know how to tell his wife, who is in Guinea with their two children. “I pay for my children's school, but I don’t know how I’ll be able to do that now.”

By creating further unemployment and forcing people to live without proper permits, Salvini’s xenophobic rhetoric and anti-immigrant policies are likely to have tangible and dangerous consequences for Italy.

Despite outrage and protests — including those by the 120 staff who will be laid off following the closure — Salvini has defended the eviction, stating in a Facebook-live video that “all guests that have the right to will be transferred with as much generosity and with as many rights to other structures.”

In Castelnuovo di Porto, as the last buses leave for unknown destinations, it's locals who are stepping in with acts of kindness.

“We have been overwhelmed with offers of help,” says Mayor Travaglini, who is hosting a young Somali woman and her children.

Some refugees have also found temporary homes with local families, and are continuing to go to school. But their future, like that of thousands of foreigners in Italy, is looking increasingly uncertain.