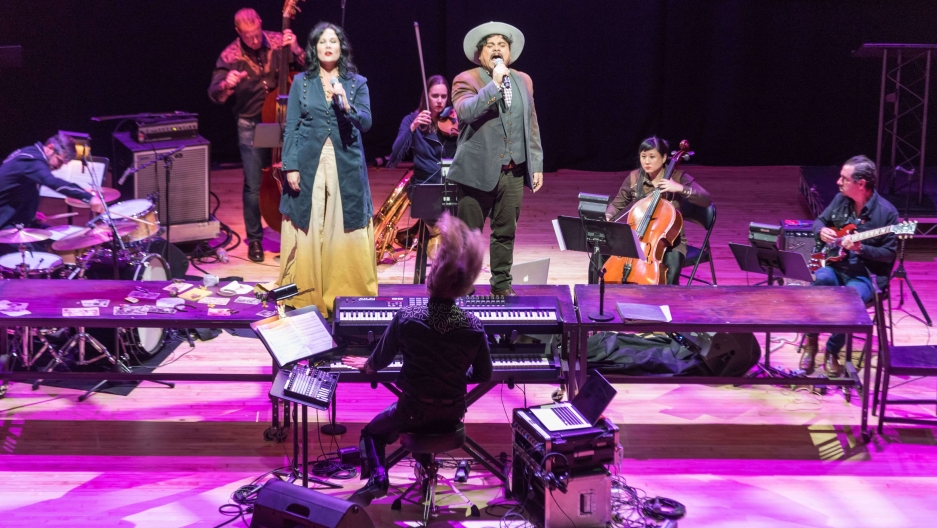 Pancho Villa was a key figure in the Mexican Revolution a century ago. The opera, "Pancho Villa From a Safe Distance," depicts the complex story on stage.

Francisco "Pancho" Villa was a complex character. He acted as a key figure in the Mexican Revolution a century ago, leading a guerilla war against authoritarianism in Mexico. Villa fought against the regimes of both Porfirio Díaz and Victoriano Huerta.

"This was one of the figures that had heroic moments and horrifying moments and has become an iconic legendary mythic figure in Mexican and Mexican American history," said composer Graham Reynolds.

Villa's legendary drama became the perfect subject for an opera created by Reynolds called, "Pancho Villa From a Safe Distance."

Reynolds was inspired by the Hotel Paso del Norte in El Paso, Texas, and its unique connection to the Mexican Revolution.

“It's a place that you can see right across the river into Juarez. And during the [Battle of Ciudad Juárez], the people would go up to the rooftop as spectators and watch the battle with their opera glasses and parasols and all that,” Reynolds explained. 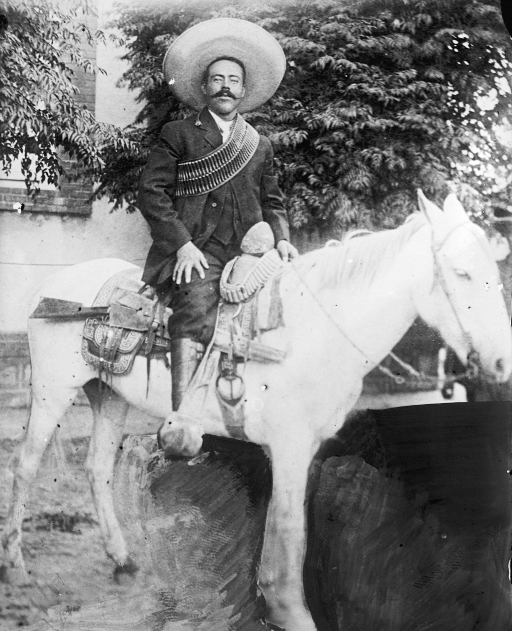 The title, “Pancho Villa From a Safe Distance,” is about those people — who were able to be fascinated by this multifaceted leader from afar.

Reynolds knew he wasn’t interested in creating something about Villa that was linear or like a biopic. He was aiming for a collage, an impressionistic opera.

“Even when you study the [Mexican Revolution] in order, it's a confusing thing. So, I wanted to get that impression of 'who do you side with?'” Reynolds explained. “Like in one song, he seems like a hero, and you're ready to join the revolution. And in another song, he's slaughtering somebody's family for no reason.”

But for some people, Villa was, and is still, very real.

Luisa Pardo, one of the opera's librettists, said she loves Villa's character because part of her family is from Chihuahua state — Villa's old stomping ground on the US-Mexico border.

When her mother was young, she started a guerrilla movement in the mountains, helping Indigenous farmers who were fighting against the large estate owners there. Pardo couldn’t help but feel some connection with Villa’s struggle on behalf of the poor. Villa was also very poor as a child and stole from the haciendas.

“My mother's struggle had a lot in common with the struggle of Pancho Villa — because they were both about the way poor people are treated in this country — ever since colonialism.  And also about how women are treated in Mexico.”

But Villa was no saint. He was responsible for a lot of bloodshed during the revolution.

“I think that he's both hero and villain at the same time,” said Pardo. “Pancho Villa was a human being whose destiny was to play a major role in history. He's contradictory.”

“But in any case, of all the characters in the Mexican Revolution, Pancho Villa is one of my favorites. And that doesn't mean he didn't make serious mistakes or committed grave injustices.” 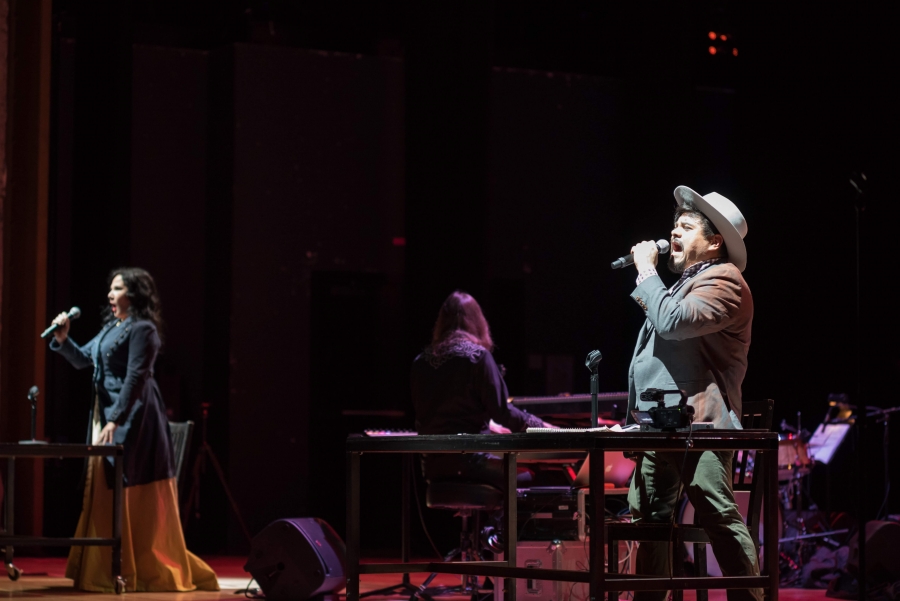 Performers belt out their songs in the Los Angeles performance of "Pancho Villa From a Safe Distance."

The opera "Pancho Villa From a Safe Distance" was set to be performed Jan. 31 in Vancouver, British Columbia.

And if past performances are any indication, there will probably be some of Villa's descendants in the audience. According to his last wife — Villa was officially married 25 times — he had at least 25 known children.

“When we started this, I figured I'd run into some people that had some stories of a distant relative, that had some association with the revolution. Not only did we get that, but person after person with 'My grandfather rode with Pancho Villa,' [and] "My grandmother's ranch was raided." All sorts of stories," said Reynolds. "Then we go up to Seattle, and this guy comes up to me and he looks exactly like Pancho Villa. He says, 'I'm Ruffino, I'm Pancho's grandson.'"

Reynolds was concerned that Villa's potential grandson would be offended by the opera.

"There are some very dark things about Pancho Villa in this opera, and we don't really hold back."

But that's not the reaction Reynolds got.

"He was all hugs and excited and very proud of the piece. And he had brought his daughter so we had Pancho's great-granddaughters [at the performance]," Reynolds said.

“My mother was his daughter. So, that makes him my grandfather," said Villa Wendell, while clutching to her birth certificate to prove her connection. 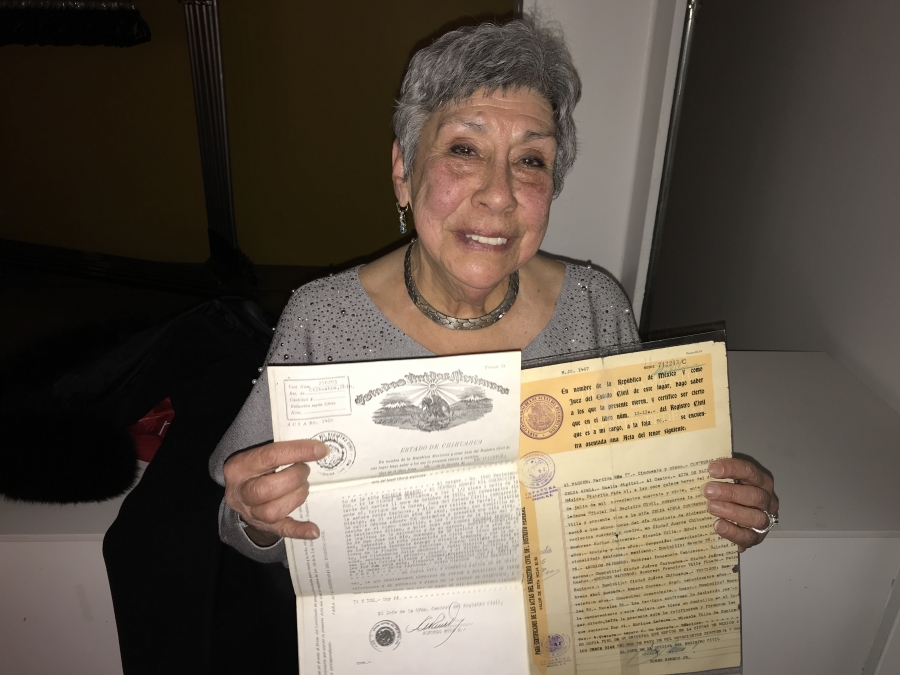 Célia Contreras Villa Pardo, a descendant of Pancho Villa, poses with her birth certificates to prove she is who she says she is.

"My grandfather, he loved the ladies," Villa Wendell said before laughing and motioning the sign of the cross. So, anyway, when she [Villa Wendell's mother] was little, her mother just dropped her off at my grandfather's [Pancho Villa]. And he also had a few others, like my aunt Célia, who I'm named after ... And there was Augustine, my uncle ... [Pancho] had the habit of taking those children to whoever he was staying with at the time."

Even Villa Wendell admits there are many layers of complexity to her grandfather's story.