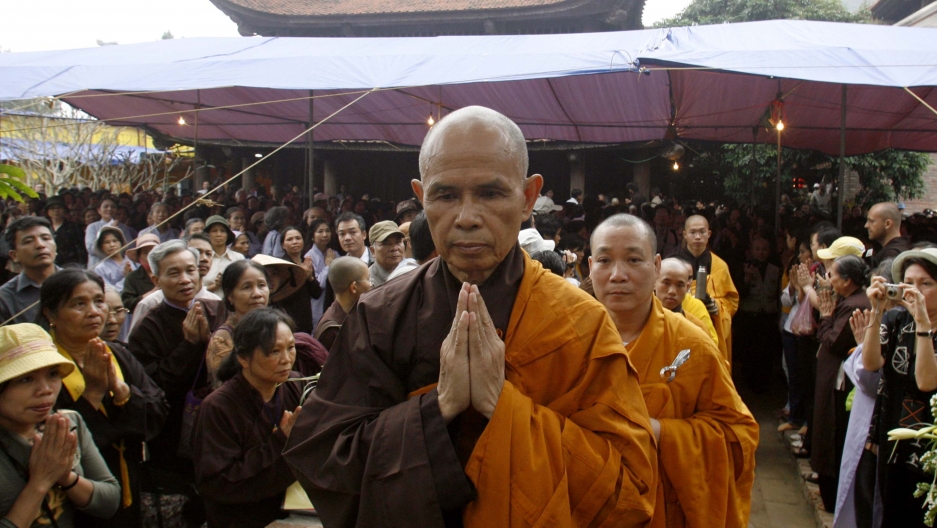 Buddhist monk Thich Nhat Hanh walks among believers after finishing a speech at the opening ceremony of a requiem mass at the Non Nuoc pagoda in Soc Son mountain 40 miles north of Hanoi, Vietnam, April 20, 2007.

Credited with bringing Buddhism to the West and teaching the world mindfulness, Thich Nhat Hanh is known for his wise phrases like “surrender yourself to the present moment.”

Hanh was born in Vietnam 92 years ago and knew he wanted to be a monk by the time he was 7 years old. In 1960, as Vietnamese soldiers were training for the battlefield, and the anti-war and anti-draft movements gathered momentum in the US, Hanh left Vietnam to teach Buddhism in America at Columbia and Princeton universities.

The situation in Vietnam reached a pivotal moment in 1963. Communists had banned the practice of Buddhism and fired on people who demonstrated against the government. A Buddhist monk set himself on fire in the middle of a busy intersection in Saigon (now known as Ho Chi Minh City) to protest the South Vietnamese government's anti-Buddhist policies. Suddenly, Americans wanted to know more about what was happening in Vietnam. Hanh was there to explain.

He became an anti-war activist, leading risky missions into Vietnam. He traveled the world to gather support for peace, addressing the British, Canadian and Swedish parliaments. And he met with Martin Luther King Jr. Afterward, King came out against the Vietnam War and later nominated Hanh for a Nobel Peace Prize. In 1969, Hanh went on to lead a Buddhist delegation to the Paris Peace Talks, which eventually led to the treaty ending the Vietnam War in 1973.

“He said that Vietnamese wanted a solution to the war, which was not made in Moscow or made in Beijing or even made in Washington, but that the Vietnamese wanted their own way,” said Penelope Faulkner, deputy director of the international Buddhist Information Bureau, which is the overseas human rights office of the Unified Buddhist Church of Vietnam.

Faulkner was a teenage volunteer when the Vietnam War ended. She lived in the same house as Hanh in Paris and says he was the voice of the Vietnamese for the international community — until Americans left Vietnam, and a communist government took control.

“At that time, Tich Nhat Hanh was silent. And you know, boat people were leaving Vietnam in the thousands and dying on the seas in a quest for freedom,” Faulkner said. “And we thought, if you’re talking about compassion and peace, this is the time to do it. And Tich Naht Hanh was not ready to do that.”

She says they parted ways “in mutual respect.” The communist government banned Hanh from returning to Vietnam. Vietnamese outside their home country were suddenly refugees. Nguyen Ba Chung, a writer, and researcher at the University of Massachusetts, was a college student at the time and was stranded in the US.

“Buddhism was the thing that saved me during that time,” he said.

What helped were books of poetry by Hanh, who was prolific.

“Every one of them strikes something wonderful when you read it,” Chung said. “It points to something true.”

Hanh also founded a monastery in southern France and lectured around the world. He helped fuel a whole mindfulness industry that garnered celebrity fans Richard Gere and Oprah Winfrey. In 2005, the Vietnamese government invited him back, and he went, again drawing criticism from people like Faulkner.

“His presence in Vietnam, unwittingly maybe for him, gave the impression to the international community that Vietnam was respecting religious freedom, when in fact, it was a time of repression,” she said.

Hanh said he talked to the Vietnamese president about these repressions and advocated for the dissolution of the country’s feared religious police. His appeal didn’t work. After Hanh left, his followers were punished. Chung says Hanh was walking a fine line and tried his best.

“Anybody who condemns him for not speaking out against the government, I don’t think that’s really fair when that’s the consequence of his action,” he said.

Hanh arrived in Vietnam for a final visit in late October 2018. Now, he's reportedly stopped taking the medication he was prescribed after he had a stroke three years ago. Hanh is staying in the monastery where he took his vows as a monk when he was 16. At 92 years old, Hanh says he’s ready to transition.

“Buddhism doesn’t consider death to be something to be feared. Death is a normal transition into another stage of life,” Chung said. “They believe in rebirth until you attain enlightenment that can free you from rebirth.”

Hanh has hung a piece of his own calligraphy on the wall above him. It says simply, “Return.”

Editor’s note: An earlier version of this story said that the self-immolation of a Buddhist monk in Saigon back in 1963 was in protest of the Communist regime. The monk was protesting the South Vietnamese government's anti-Buddhist policies. Also, the story said that Hanh took Buddhist vows against his parents’ wishes. Hanh obtained permission to take vows, but his parents were reluctant.