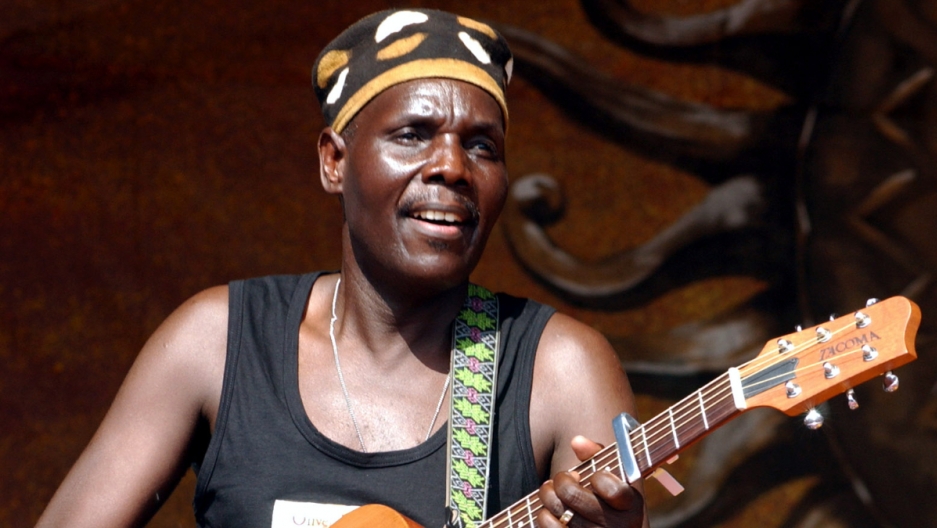 Oliver Mtukudzi performs at the 33rd Annual Jazz and Heritage Festival in New Orleans, May 3, 2002. Mtukudzi died Wednesday at 66.

Zimbabwe's most successful and internationally renowned musician Oliver Mtukudzi died on Wednesday after suffering from diabetes, ending a career that spanned four decades and 67 albums.

The 66-year-old singer, affectionately known as "Tuku," died at a local clinic on Wednesday afternoon, the Minister of Information Monica Mutsvangwa said.

As news of his death filtered out, government ministers, lawmakers and ordinary Zimbabweans set aside the country's political troubles to pay tribute to the most recognized artist to emerge from Zimbabwe onto the international scene.

With his husky voice, Mtukudzi earned a devoted following across Africa and beyond. He largely steered clear of politics in his songs, which touched on people's everyday life struggles.

But in 2001, his song Wasakara, loosely translated as "you are old" from the chart-topping album Bvuma/Tolerance, was interpreted by many to refer to Robert Mugabe, then Zimbabwe's 77-year-old president, whose party won a violent and disputed vote the year before.

In March 2003 Mtukudzi made it to the cover of Time magazine titled "The People's Voice," a story about how the country's musicians were singing for change.

"If anyone ever made me proud to be #Zimbabwean it was you. Thank you for making us happy for so long, especially during the darkest days," opposition senator David Coltart posted on Twitter.

Rest in peace Oliver Mtukudzi. If anyone ever made me proud to be #Zimbabwean it was you. Thank you for making us happy for so long, especially during the darkest days. pic.twitter.com/K5gsugnb2f

Mtukudzi's music cut across generations and in his later years he produced duets with younger musicians, some of whom he nurtured at his arts center in Norton, outside Harare.

He has produced songs with South African group Black Mambazo as well as Hugh Masekela, the trumpeter and singer known as the "father of South African jazz" who used his music in the fight against apartheid and died on the same day in 2018.

"From the depths of Harare his career blossomed like the flame lily flower & his artistic genius brought us together in good times & gave us hope during our darkest hour," Nathi Mthethwa, South Africa's Minister of Arts and Culture, tweeted.

“He was an amazing performer. Very forceful and upbeat and gets the crowd dancing and a voice — that velvet voice — is a velvety voice,” Werman said.

That “velvet voice” comes with messages. Marco Werman had a chance to speak to Mtukudzi about what his lyrics meant whether those had an impact on people.

On a song called “Todii,” Mtukudzi talked about taking precautions in the age of HIV and aids in Zimbabwe.

“Zimbabwe was pretty heavily hit by the disease so [Mtukudzi] was talking to people almost in the absence of proper health education and giving them messages that they can use literally in their everyday lives. And that's actually tied into the musical culture of Zimbabwe,” Werman said.

Mtukudzi explained this thinking behind the song.

“In my culture, we use music to easy up a situation, to neutralize the tension in times of bad,” Mtukudzi told The World in 2002. “So I tried to make a beautiful tune that people can dance to, but at the same time, talking about such serious issues. I'm trying to trigger dialogue between people because that song is merely questions of little issues that people never talk about, you know. Like when you're pregnant and you realize you are HIV positive ... what shall we do then?”