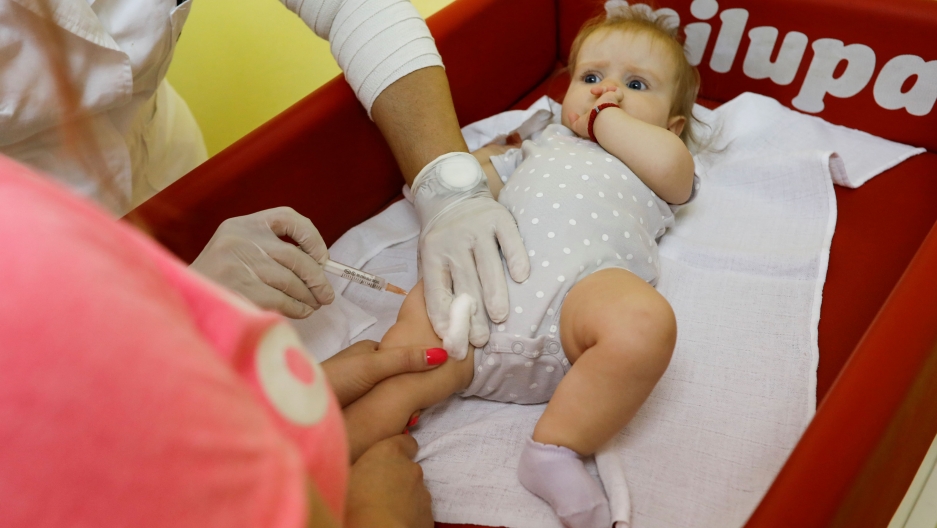 Every year, the World Health Organization releases a list of what they believe are the top 10 threats to global health. This year, the list included a few new additions like "weak primary health care" and what WHO calls "vaccine hesitancy" or the "reluctance or refusal to vaccinate despite the availability of vaccines."

WHO outlines work to eliminate cervical cancer through HPV vaccines as a goal for the year.

The World's Marco Werman sat down with WHO's Tarik Jasarevic in Geneva, Switzerland, to talk about why some of the top 10 made it on the list. You can read the full list of issues here.

Marco Werman: People like lists. It makes things easier to understand. This is kind of a life- and -death list, though. How do you make the decision to put a threat on the list for 2019? What are the factors?

Tarik Jasarevic: It’s not really a ranking list. We wanted to show the range of health risks that the human population is facing these days. So, this is not an exhaustive list. And it really ranges from outbreaks of vaccine-preventable diseases, to noncommunicable diseases to humanitarian crises to weak health systems.

Yes, so the threats range from air pollution and climate change to HIV. Could any of these threats actually be real in 2019? Like, influenza. Do you see any potential outbreak on the horizon?

What we need to do is basically two things: One is what we are already doing — preparing the seasonal vaccine so that we protect people based on our calculations on what combination of viruses should be dominant in the coming months for either northern or southern hemisphere. More importantly, we need to be ready. We need to raise preparedness in all countries, so once we get this pandemic, we are able to quickly detect this strain of influenza virus and prepare vaccines quickly and use those vaccines.

There are obviously other things that we have been fighting for years, like HIV. We made huge progress but unfortunately, still 1 million people die every year of HIV/AIDS, despite the progress we made in putting people on antiretrovirals.

There's been a big reaction to "vaccine hesitancy" making the WH0's 10 threat issues list for 2019. It's really anti-vaxxers being on the list. Not getting your kids vaccinated, that's a largely personal choice, isn't it?

Well, people do not vaccinate their children for various reasons. It's not so simple, really, to put everyone in the same category. People don't do it sometimes because of inconvenience to access vaccines. Sometimes, it's complacency. Sometimes, it's a lack of confidence (in vaccines).  What we really have to do is remind everyone that vaccines do prevent between 2 and 3 million deaths a year. And further, 1.5 million children could be saved if the immunization coverage would be optimal. We see the return of diseases. And while it is maybe normal, though unfortunate, that we see this in conflict areas and in humanitarian crises, when the immunization coverage goes down, we see a re-emergence of diseases like diphtheria and polio, as we have seen in Syria, Yemen or Bangladesh. But we also see the rise of measles, for example, by 30 percent globally — and in countries who are not really in a humanitarian or conflict context. So, it is important that we all understand the importance of vaccines.

So, we know that in the US, an outbreak of measles has occurred, as well. As far as parents opting or choosing not to vaccinate their kids, is that a uniquely American or Western trend?

No, we have seen this in different areas of the world. Locally, there could be some resistance for all sorts of reasons. To give you an example, we are doing the Ebola response in DR Congo and in some instances, people may not want to accept interventions for all sorts of rumors, or fears because of misconceptions. And this can happen in any society, really.

One thing that really struck me, Tarik, is that a lot of the threats on this list actually seem fairly manageable but we as individuals or groups of people don't seem to have a handle on them. Is that fair?

Well, it depends. For example, when it comes to air pollution — this is closely linked to climate change — we know that nine out of 10 people are breathing polluted air. And air is polluted because of the use of fossil fuels. And we know that 7 million people die due to the diseases that can be linked to environmental health risks. And this is something, really, that we just started working to find solutions for. We hosted the first global air pollution conference this year. But we know that more has to be done.

Air pollution and climate change is a massive thing to tackle. I mean, what can the WHO do about that?

We are part of a global UN community, and wider as well, trying really to make sure that everyone understands that this will have a concrete impact. Some may think that it's a very conservative estimate, that climate change up to 2050 can provoke at least 250,000 additional deaths per year. That’s due to malaria, malnutrition, diarrhea, heat, stress and all sorts of health conditions.

But again we need really to ... work with countries to try to see how their system can be adapted. For example, look at one of the things on the list is a dengue fever. And why is dengue fever on the list? Dengue fever has been there for a long time. It is because of a climate change that we are seeing a vector that is transmitting dengue but also some other vector-borne diseases in areas that we have not seen before. And then more and more people are getting at risk of vector-borne diseases simply because vector, such as a mosquito, is moving to new areas because of a climate change. And people who don't have immunity are more likely, obviously, to get infected.

So, as you say, this list isn't a ranking, per se. Is the idea then to draw people's attention to these threats, that perhaps they might not have been thinking about?

I think that the intention is to say, "Look how wide the range of health threats is." It really goes from what you see on TV, such as Ebola outbreak, to things that you don't maybe hear so much about, but like noncommunicable diseases, kills 70 percent of people.

Seventy percent of people who die every day will die from noncommunicable diseases, such as cancer, diabetes, cardiovascular diseases, hypertension. And we know what the risk factors are: tobacco, alcohol, lack of physical activity, and inappropriate nutrition as well as air pollution. So, we have to tackle all these issues. From highly killing pathogens like Ebola to something that is linked to a lifestyle like noncommunicable diseases — to something that exists for a long time, like HIV and dengue. And then we really need to look into the underlying issue — and that's the strength of health systems. Because what WHO is saying is that we want universal health coverage. We want every individual on this planet to be able to access basic health care at an affordable cost, including accessing the medicines at affordable cost. Now, this cannot happen without strong primary health care systems. And we have also seen that when you have an outbreak of a highly infectious pathogen — like hemorrhagic fevers, Ebola, Lassa fever or yellow fever — that only systems that are strong enough can really quickly detect and respond to outbreaks of these pathogens.

So, basically, we want countries to invest in their health systems.

Is there anything that you'd recommend for each of us as individuals to take on as an immediate action?

Well, I think what individuals should be doing is really following the advice of health authorities because health authorities are in the position to provide really credible and scientifically based advice on what persons should be doing. For example, we mention antimicrobial resistance. This is about people using antibiotics in a responsible way, so we slow down this process of pathogens mutating and becoming resistant to medicines.