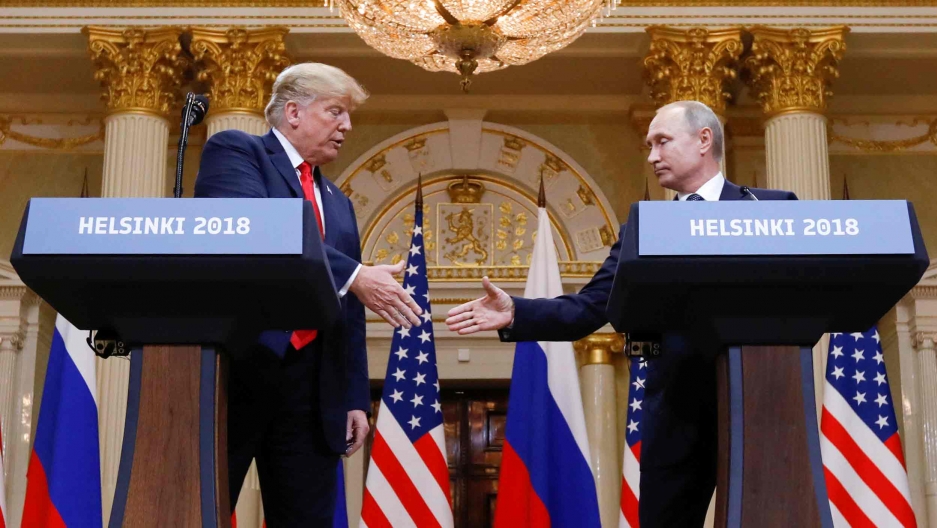 US President Donald Trump and Russian President Vladimir Putin shake hands during a joint news conference after their meeting in Helsinki, July 16, 2018. The Washington Post reported that Trump asked an interpreter for her notes of a May 2017 conversation with Putin and instructed her to not speak with other administration officials about it.

On Saturday, The Washington Post reported US President Donald Trump confiscated notes that his interpreter made during a 2017 meeting in Hamburg with Vladimir Putin that also was attended by then-Secretary of State Rex Tillerson. Trump also told the interpreter not to talk to other administration officials about what was said in the meetings, the Post said.

"I just don't know anything about it," Trump said on Monday of the interpreter's notes.

He said he had a successful meeting with Putin, adding, "We have those meetings all the time, no big deal."

Democrats, however, said they thought it was a very big deal and expressed concern about the report on the interpreter.

"It's disturbing, of course. If it's true it's disturbing and we want to get to the bottom of it," US Representative Eliot Engel said in an interview with CNN on Monday.

Engel said the House Foreign Affairs Committee he chairs is working with the intelligence Committee to discuss a possible subpoena of the Trump-Putin interpreter. He said he would prefer not to do that but added, "We may have no choice."

But in 1978, Congress passed something called the Presidential Records Act. The law changed the ownership of presidential records from private to public. To learn more about the act, The World's Marco Werman spoke to Tom Blanton, the director of nongovernmental National Security Archive at The George Washington University.

Tom Blanton: It's against the law. The Presidential Records Act, which Congress passed back in 1978, was meant to deal precisely with this because Richard Nixon had said, "No, all those Watergate tapes, they're my personal property. I can do anything I want to with them." And Congress said, "Nope, that's not right. If you're working for the taxpayer, the records belong to the taxpayer." Where the big disputes are is how much review the courts can have over what the president does and how much people like us at the National Security Archive can intervene. We've got a lawsuit right now about the White House visitor logs because this business with the interpreter's notes, it's not the first time President Trump has tried to push the envelope shall we say, or rip up the envelope.

The World: Nixon and his tapes are a great example of this. What does the Presidential Records Act say about consequences for a president who doesn't follow the law?

It's really up to the Congress, unfortunately, and this Congress has shown very little backbone to enforce consequences. The National Archives, the government agency, has been a bit of an orphan agency — folks like us have had to sue them to get them to intervene. The president can't destroy records without the permission of the archivist of the United States, and the archivist of the United States is supposed to bring in the attorney general to take action and stop. But courts have been really scared to say, "Wait a second." At the very least, the court should review.

This interpreter's notes question, though, it gets even more interesting because the parallel of Nixon is right on target. Nixon and Kissinger were pretty famous for creating multiple versions of a transcript of a conversation with a foreign official. So, they would make one version that was complete and that would stay only in a White House safe or in Kissinger's safe. Another would be more of a summary with kind of the cuss words cut out that could be shared with the State Department. Another would be like a one-page gist, and they'd share that with the Defense Department.

And so, for historians who've been putting together those conversations, the tapes really help because they showed the full Monty, if you will, and then all these partial versions that we've resurrected, you kind of see a consistent pattern of deceit. Trump's effort to prevent even a transcript or so-called memoranda of conversation from being available at all is beyond the pale.

So, what records exactly are referred to in the Presidential Records Act, like the interpreters' notes from the president's meeting with Putin? Would that fall under this act?

Sure, absolutely and something at that very high level of the president's own words and a foreign leader's words would be at the heart of what the Presidential Records Act is about. Here, it's unclear what Trump is conspiring at. It's almost as if — I don't know, the metaphor that comes to mind to me, is not an analogy to other presidents because we have never had a president like Trump — it's more like a Mafia don. It's kind of, you only trust the people who are in your family, you don't want anybody else really to know what's going on or what you're saying or what promises you're making to foreign governments. The most amazing thing to me about Trump's foreign relations has been we the American public have found out more about his conversations with those guys from those governments — like Putin's — the foreign ministry spokesman over there in Moscow will put out a readout on the conversation that's more detailed than anything Sarah Huckabee Sanders gives the folks at the White House.

Is Congress eventually just going to have to step up and deal with this? I mean, and especially regarding this meeting in Hamburg and what we know happened in it — or what we don't know.

Exactly. I think both the Senate Foreign Relations Committee and the House Foreign Affairs Committee are going to have to hold hearings where they pull in those top senior officials and get them on the record. What do you know? What do you not know? What were you told? What records did you get to see? And that poor interpreter may end up in the crosshairs. What's she going to do, right? The president told her one thing but the Congress has a constitutional obligation to know what's going on in foreign policy. But I would even say the courts are going to have to step up. We went through this after 9/11 where President George W. Bush said the courts don't have a role in judging anything about the war on terror; it's all up to the commander-in-chief. But finally — I think it was Sandra Day O'Connor — who stepped up and said, "Wait a second. Courts get to review whether the executive is obeying and faithfully carrying out the law." And I think we're still on the hunt for a federal judge with some backbone who will stand up and say, "Look, you can't do that. You can't delete records, you can't hide the record of a conversation, you can't tear up these documents on your desk and leave them under your table. That's just wrong."

This interviewed has been condensed and edited for clarity. Reuters contributed to this report.