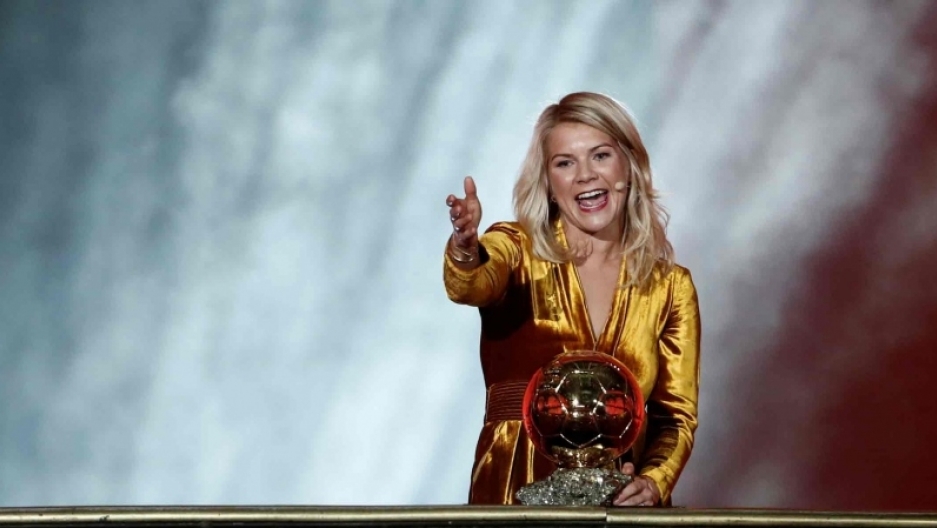 Soccer player Ada Hegerberg became the first woman to take home the Ballon d'Or Féminin, an annual soccer award presented by France Football recognizing the best players in the sport. Hegerberg spoke to The World about receiving the award and about how her win was a message for all young girls playing soccer.

"I know the importance of having role models to look up at," says Hegerberg, a striker for Olympique Lyonnais. "And the timing couldn't be better to send that message."

Hegerberg was named Union of European Football Associations' Best Women's Player in Europe in 2016, BBC'S Women's Footballer of the Year in 2017 and the Ballon d'Or in December 2018.

Marco Werman: So because of the timing of the Ballon d'Or and you're receiving it, or just kind of a movement around the globe, I'm thinking of the #MeToo moment and what that's led to.

After you won the award, Ada, you said that it's important for girls and young women to believe in themselves. I want us to hear just a moment of what you said: "Obviously when you see a Ballon d'Or trophy for the women's yesterday on telly and you're, I don't know, 10 years old, you must be inspired." Why do you think that kind of representation is important for girls and young women?

I just think it's a symbol in itself. It shows that someone came up by the pitch and decided to get this award, finally. We were in 2018, so it took some time, but France Football made a decision having this award for women as well. That's a huge step forward. Obviously, it's an individual trophy, but it's still a symbol because we're talking about women's football. That's basically the biggest sport in the world and it shows that we're going some right direction as well.

Were there football players, soccer players as we say, who inspired you and were there women in that group?

Yeah, I mean that was the hard part because when I was growing up, there was so little media and so little people covering women's football. So, it was never on the telly, for example, except the big tournaments such as the World Cup and the Euros [Cup] maybe, so, I was watching men's football all my youth. Today, I think that's changed a lot and that is so positive. I remember watching the [Women's] World Cup in 2011, for example, and I was so motivated, so inspired by that tournament. That was a great World Cup that gave me that little push to keep going. So, today, it's a lot different, but it also has to develop even more, getting the media on the road covering even more women's football. 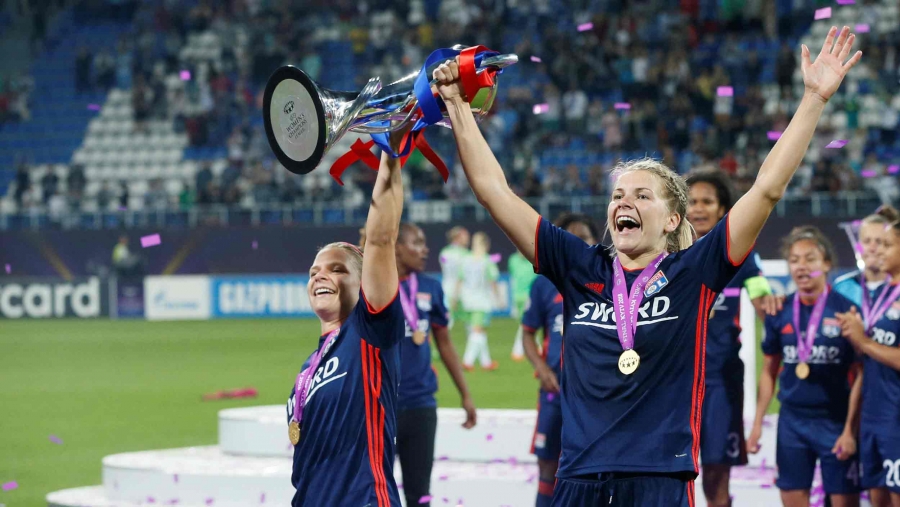 Olympique Lyonnais players Eugenie Le Sommer and Ada Hegerberg celebrate with the trophy after winning the Champions League final in 2018 in Kiev, Ukraine.

Yeah! Obviously! Like every other girl my age! What a movie! It sounds like a cliché, but that was the movie that made me make the push forward.

Now, I just want to mention at the ceremony last month where you were awarded the Ballon d'Or, it was marred by what a lot of people have described as a sexist comment made by the DJ who was hosting the show. He asked you if you could twerk. You said that you didn't think of it as sexual harassment at the moment because obviously, you were accepting the highest award in soccer. What do you think about the situation now?

I'm going to be honest with you, I was totally turning that question down because I was ... never in my mind [would I think ] of twerking in front of millions of people.

Right. I mean, why would you?

[Laughs.] Exactly! So I think it was an unfortunate moment for him ... it was just bad timing for a question like that. But I was just in the sky. I had a Balloon d'Or and I was blown away by that moment. So, it didn't take attention from the real thing. But I know, it got messy in social media and people reacted a lot — and I think that's fine. That means that people are on their toes as well. And that's different today, because it's not acceptable to say [just] anything in 2019. And I accept that.

How do you deal with any sexism you've encountered as a woman in soccer?

Does that mean it's a constant battle for you?

I would say it's a constant battle for all of us, all girls and women, and it's all about taking responsibility, standing up for ourselves. Everyone can make a difference, I feel. Growing up in Norway with democracy and equality is something that I brought with me in Europe, as well as in the world. So, [it's] something I'm gonna have a passion for all my life.

Your sister also played soccer professionally, I see. what was it like growing up with someone who is also talented? Did it become a rivalry with you two?

It meant everything, to be honest. I had a bigger sister that pushed me. She's in PSG [Paris Saint Germain Football Club] today which is quite surreal for both of us, on the highest level, and it's quite surreal for our parents as well. We've been pushing each other, supporting each other, since we were little kids. She's one of the people who has meant maybe the most for me in my life and my career because she always was there to help me and we're still best buddies today and sisters, so we have a special bond.

That's great. Do you ever find yourself playing against each other on this on the pitch?

Yeah and I'll tell you, it's hard for our parents!

Is it hard for you? That's the question.

It's quite easy for us because when we step on that pitch, we're just so mentally in it and we just search for the win, you know? So, when we step off the pitch again, its completely fine. When it gets down to business, we're here to win them and it should be like that as well. But ask my mom and dad, they've been struggling now for one year.

So aside from being named the top woman soccer player in the world last month — I'm assuming that that's a really high moment in your career — what has been your best moment as a soccer player?

I would say winning the Champions League. [I've] been lucky to win it three times with Lyon and what we achieved the last years is historical, so that's quite big to me. And I hope to win as many as possible before my career is done.

A few more would be just cherry on the cake, wouldn't it?

[Laughs.] It would, crossing fingers.