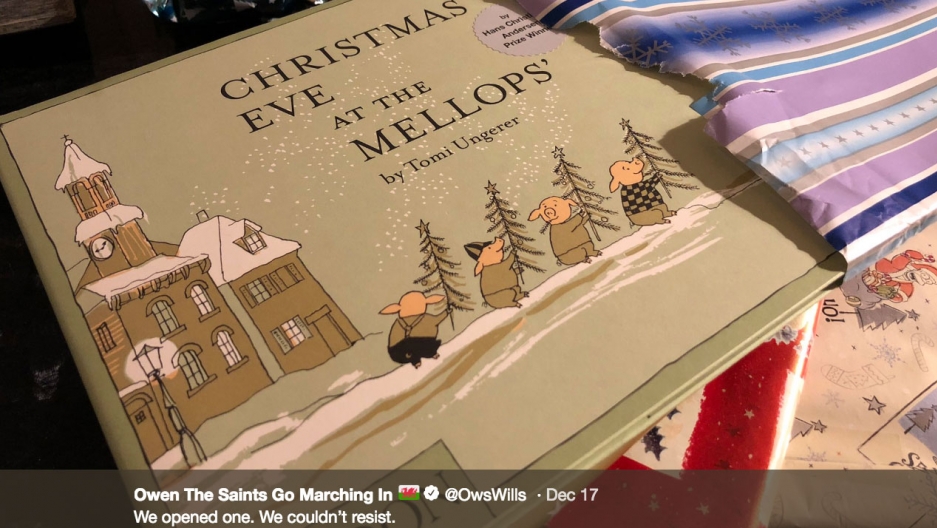 Owen Williams posted this image to his Twitter account after his neighbor brought over a sack containing 14 Christmas gifts for William's 2-year-old daughter. The gifts were all bought and wrapped by Ken Watson, an elderly neighbor who died earlier this year.

Here is a Christmas story that feels like it could have come from the pen of Charles Dickens. It starts with a ring at the door a couple of weeks ago on a rainy night at a little house in the British town of Barry, in Wales.

In the doorway is a neighbor, a woman bearing gifts.

“She said, ‘These are all the gifts my dad put away for Cadi for the next few years,’” says Owen Williams, the owner of that house and the father of 2-year-old Cadi.

The neighbor bringing the gifts was Jenny. There’s not much unusual about that — except the man who's prepared the gifts, Jenny's father, was dead.

“To say I was gobsmacked — you could’ve knocked me down with a feather at that point,” Williams said. “You just don’t expect anything of this sort.”

But before he died, he'd prepared a sackful of Christmas gifts for Cadi, Williams' daughter.

“It was like when Mary Poppins is reaching into her bag and pulling things out (gifts and things) just kept coming and coming and coming,” Williams said. “It was getting more ridiculous as we kept pulling them out, 14 perfectly wrapped gifts in this one bag.”

One perfectly wrapped gift for each Christmas until Cadi turns 16.

Williams was so struck by Watson’s kindness that he wanted to shout the news from the rooftops. But since that's kind of frowned on these days, he did the next best thing.

And boy, did he get a response.

Our elderly neighbour passed away recently. His daughter popped round a few moments ago clutching a large plastic sack. In the sack were all the Christmas presents he’d bought for *our* daughter for the next thirteen years. 😢 pic.twitter.com/6CjiZ99Cor

“Genuinely my phone has not stopped,” Williams said. “My battery life is half of what it used to be last week. It’s insane. It’s been an absolutely insane week.”

Williams got thousands of likes and retweets and calls from journalists all over the world.

Williams even ran a Twitter poll to see if they should open the presents all at once, or wait and open just one gift per year, as Watson intended.

What do you all think?

“There is a certain charm in the idea that you would just have a surprise every Christmas, a gift from Ken,” Williams said. “So we’re going to heed the results of the Twitter poll and we are going to give her one gift every Christmas for the next 14 years of her life until she’s 16.”

An annual gift from Watson to Cadi. A fine tradition indeed. But who was Ken Watson?

“Ken had been a Marine salvage diver, so Ken had dived into some of the most dangerous and inhospitable waters in the world,” Williams said. “He’d been in the Royal Air Force, he’d been a master wood turner, he was a craftsman, he’d been a chef, his family had owned a bakery, so he baked his own wedding cake.”

What’s even more impressive is that Ken’s adventures didn’t stop when he reached his 70s or even his 80s.

When Ken’s wife passed away in 2012, he took up wing-walking, skydiving and other adrenaline-filled activities.

Our dog loved him. I mean, genuine visceral love. It was mainly due to the chocolate digestive biscuits he gave her on first meeting. She’d scream whenever she saw him. Really scream. Like a banshee. He’d call her “my darling” and “sweetheart”.

This is her first meeting. pic.twitter.com/DoG1F8mprO

But to Owen, the lesson that he takes away from Ken is that it’s never too late to open up to your neighbors.

“That’s the one thing about neighbors,” Williams said. “You can open up a whole world like we did, that turns out to be this tiny pocket of magical, that you were never expecting to find, and I could tell you this: At this time of year, if you have not met your neighbor so far, then this is the ideal time of year to do that because nothing sums up Christmas more than taking a small token around to your neighbor and saying, ‘Hi.’”

Christmas present number 1 is open, and it’s a little goat! 🐐