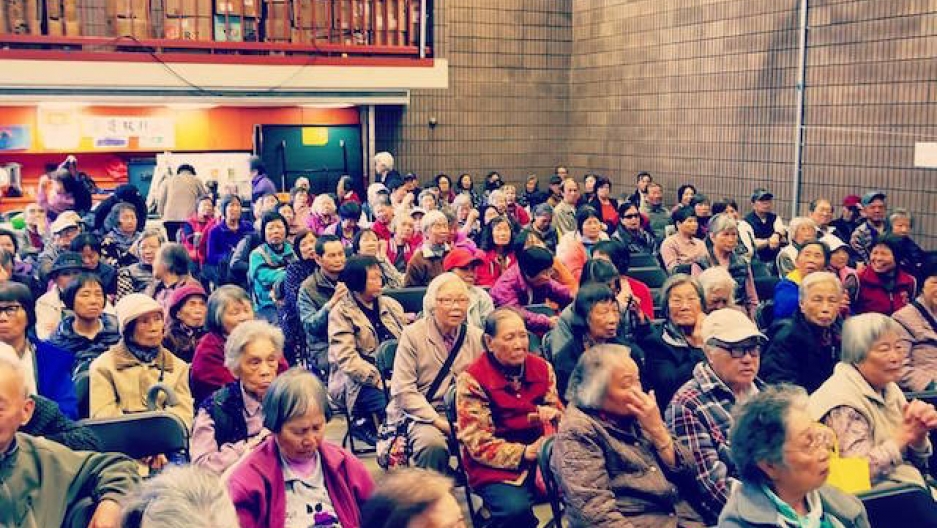 Residents of San Francisco's attend a talk on protecting themselves from immigration enforcement.

Editor's Note: On Dec. 17, the Trump administration is set to deport more than 40 legal Cambodian immigrants, many of them children of refugees, who have committed crimes in the United States. The deportations are based on a 2002 agreement between the United States and Cambodia — though this administration has widened the criteria for Cambodians it considers deportable. The author is an attorney at Asian Americans Advancing Justice - Asian Law Caucus and is involved in a legal effort to stop this week's deportation flight.

In 2017, right before Christmas, we stop a deportation flight to Cambodia with 30 fathers, brothers, and sons on board. A few months later, many of them are deported anyway.

Strangers tell us at house parties, “Thank you for resisting. You must be so busy with Trump.” We stop revealing ourselves as immigration attorneys, mainly because our stories are downers. So that dinner partiers don’t go silent on us, we talk about our hobbies instead, as though they are our professions. We become cheesemongers, climbers, carpenters. I spin clay in a circle for a living.

In my first deportation case, I represented a homeless Filipino senior with a mental illness. The attorney from Immigration and Customs Enforcement fixated on how my client had been convicted of stealing from the local utility company. When I pointed out that he had plugged his electric wheelchair into a streetlight so that he had enough of a charge to get around, even the immigration judge looked embarrassed. He waved at ICE to move along. After we won, I ran straight from the courthouse to the Greyhound station to buy my client a bus ticket. Otherwise, that night, ICE would simply dump him in the street in front of the detention center.

In immigration court, we see employees of global prison conglomerates, who are ostensibly there to keep us safe. They usher crying families out of court, so that they can sweep under the benches with circular mirrors on sticks. On the day we show up to court in purple shirts, hoping to show our support for a domestic violence survivor, one threatens to pull a gun on us.

Within minutes of meeting someone in detention, I ask them deeply personal questions. I try to share something from my life in return. They often inquire if I’m Chinese. During one detention visit, I laugh with a client at literal translations of our families’ Chinese names. My dad is Feudal Court Attendant and my mom is Snow that Tinkles like Jade Pieces.

We spend hours driving to immigration dungeons. The beauty of the Sacramento Delta, with its tule fog and orchards, makes us want to go camping. Some of the detention centers are pretty. One has tiny Japanese bridges that connect landscaped lawns. As we pass the incarcerated gardeners, they stand silently on the other side of a colored line. We can see how dangerous ICE thinks they are by what color they’re wearing. Brown people in red garb signify the greatest danger.

Color is a carceral obsession. At San Quentin, I’m told that my lime-green shirt too closely resembles the forest-green of the guards. For my safety, so that I don’t get shot by the guard towers (why would they shoot someone who looks like a guard?), I will need an escort. Although I can see my destination 30 feet away, I wait 20 minutes for a golf cart to arrive. In the ten seconds I share with the driver of the cart, he tells me to wear black next time. “Save us all the trouble,” he says.

We are forbidden to give advice to individual detainees, but broad generalizations about their rights are for some reason acceptable. Women seeking asylum hold out their hands, palms upward, and ask, “What have we done wrong?” “If you cannot help all of us, please help our sister.” We are not allowed to bring in water or food. By the end of the day, my vision swims in a haze, but I stay until the guards bang on the walls, hollering threats to lock us in too.

Our clients tell us that prison was easier than ICE custody. In prison, at least they knew when they would be free. We dream, with them, about their first meal when they’re released. All the Chinese folks seem to want a fresh fish steamed with soy sauce and ginger over rice. “That’s what home tastes like,” they say.

This series was originally published as part of A World Without Cages, a series on incarceration and migrant detention from the Asian American Writers' Workshop.