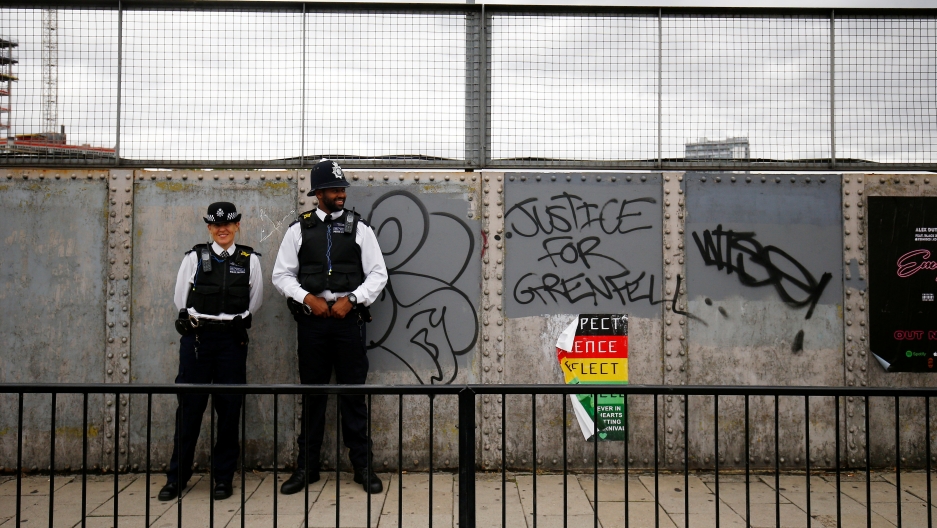 Police officers are shown on patrol during the Notting Hill Carnival in London on Aug. 27, 2018.

London has a serious violent crime problem. The homicide rate in the British capital, for example, is at a 10-year high. Knife crime offenses are also at their highest level since 2010.

Officials with the London Assembly’s police and crime committee just wrote a letter to the mayor, calling for “further and drastic action.”

Again, this is serious stuff.

But here's a different London crime story playing out this week that caught our eye here in The World’s newsroom.

It started with a callout on Twitter from The New York Times, asking people if they’ve been victims of petty crime in London.

What followed was a whole lot of British snark.

I was blatantly blocked on escalator by a left standing tourist... I didn’t just sigh loudly but also tutted AND HARRUMPHED. To no avail. Said sightseer turned and looked at me. Obviously I apologized, moved to the right and carried on sighing. These people should be locked up.

Re your request for tales of petty crime in London, @CeylanWrites: the apostrophe suffers serious abuse every day pic.twitter.com/z8SpAefAlk

I offered my American friend a cup of tea and she said “sure” instead of “yes, thank you”.... things have never been quite the same 🙄

Increasingly people respond to the question 'How are you?' With 'I'm good' instead of the grammatically correct (and far more polite) 'I'm very well, thank you.' It's only going to escalate.

I was on the Piccadilly Line last week and the announcer said there were “delays due to less drivers available” instead of “fewer”. The outrage on the crowded platform was so intense that several people audibly sighed.

British manners were another prominent theme.

Yesterday in Earls Court I held the door open for someone but they didn’t acknowledge my kind action. After they’d passed I said “thank you” just loud enough so they couldn’t hear. Fair to say they won’t be doing that again any time soon!

I once recall walking down Oxford Street, someone actually had the audacity to look at me! To make matters worse, before I even had chance to look away...they SMILED...
I wasn’t having any of that & reported them to the nearest constabulary.
It’s been 3 years, I’m recovering.

Guy seated next to me on the tube was fast asleep. To avoid the awkwardness of waking him up to check if he had missed his stop, I pretended to be asleep too so that someone else would have to wrestle with the dilemma.

Once, whilst walking through Leicester square two Americans with a map asked me how to get to Leicester square. . .rather than embarrass them by pointing out their poor map reading skills I pretended I couldn't speak English. How America got to Afghanistan after that is a mystery

One more example here, alluding to the unforgivable harm done to Great Britain by the 1964 American film, "Mary Poppins."

I have! I got my chimney swept by a man whose cockney accent was nothing short of criminal. pic.twitter.com/BD903E8tKD