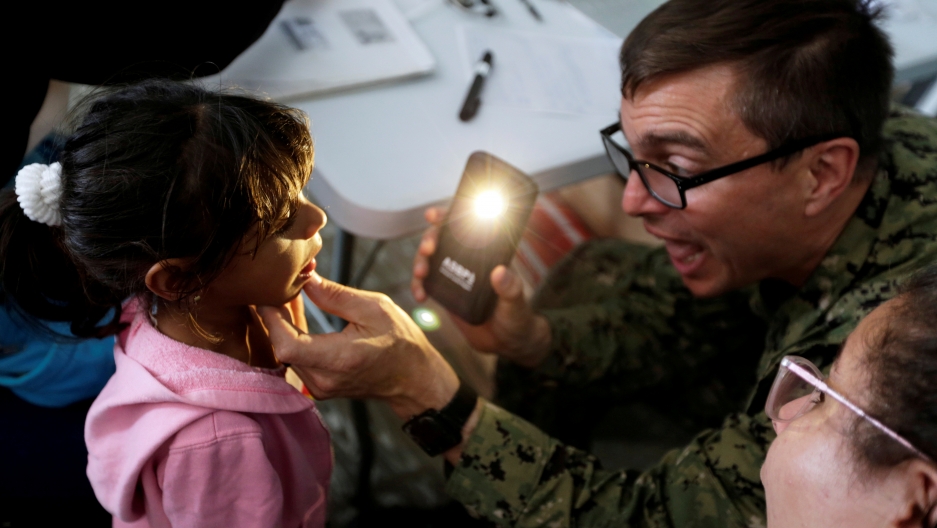 A few years ago, Dr. Juan Manuel Zambrano was a family physician in Mucuchíes, Venezuela, in the country’s mountainous western Andes region. That is, until the day he realized Venezuela’s medicine and medical equipment shortages made it all but impossible for him to practice anymore. 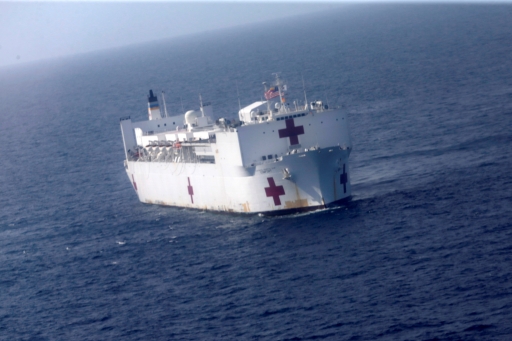 United States Navy hospital ship USNS Comfort is seen during its mission in the coast of Riohacha, Colombia Nov. 27, 2018.

"As a doctor you want to do as much as you can,” Zambrano said. “But in Venezuela you can’t, and it’s very, very sad. It’s heartbreaking, really, because you don’t have even painkillers for your patients. A lot of kids have viruses like influenza, there are a lot of rampant infections, parasites. But we don’t have medicine to treat them.”

So Zambrano came to the US and accepted a scholarship to train as a surgeon in Fort Lauderdale, hoping to take those skills back to Venezuela once — if — conditions ever improve there. But he jumped at the chance to volunteer with a dozen other Venezuelan-Americans on a US Navy hospital ship, the USNS Comfort, when it came to Riohacha, Colombia last week.

The reason: the Comfort would be serving thousands of desperate Venezuelan refugees in Colombia who’ve fled their country’s life-threatening food and medical scarcities. When the ship anchored off Riohacha as part of a three-month, four-nation Latin American tour, Zambrano came aboard as a surgeon’s assistant, helping with everything from hernia operations to eye cataract removals.

It felt, he said, like a measure of redemption.

“It’s an awesome experience because you, like, come back to your people,” a tired but smiling Zambrano told WLRN during a break from the onboard work, reflecting on the frustration and even guilt many Venezuelan doctors feel for having to leave their country.

"You feel that you have another opportunity to help your people. It’s really, really amazing,” he said.

Doctors not surprisingly performed free surgeries around the clock last week in operating rooms aboard the Comfort. Among the anguished Venezuelans who sought help was Eduardo Borges, a construction worker from Maracaibo whose three-year-old son Santiago needed testicular surgery. The procedure wasn’t available to them in Venezuela — and even when they came to Colombia it cost more than they could afford. 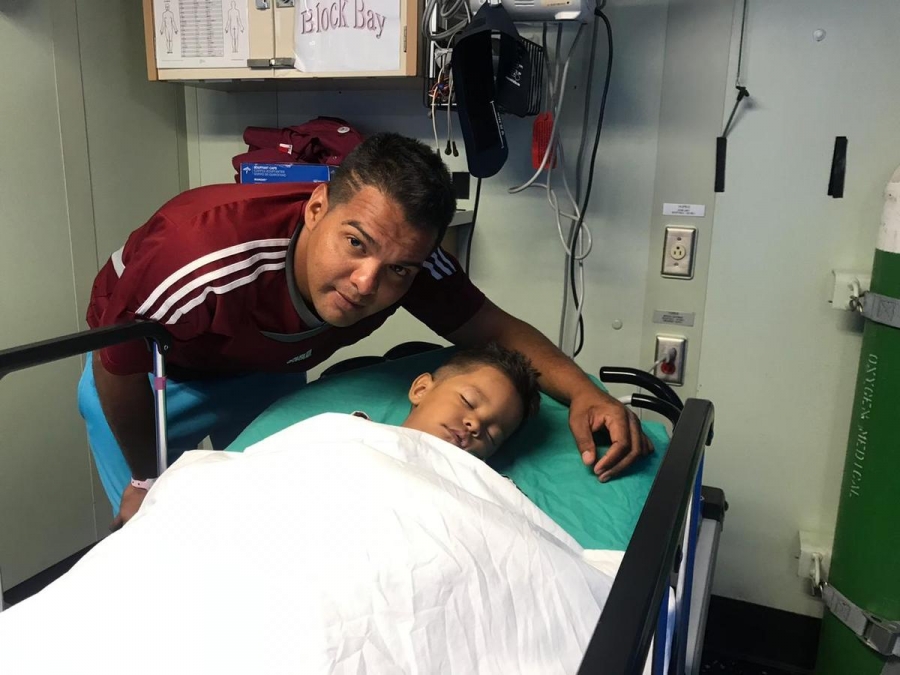 “Access to medical services isn’t easy as a refugee,” Borges said as he watched Santiago sleep in one of the Comfort’s pre-op beds. “You don’t have papers, insurance, a job. When we heard about the hospital ship we headed right here.”

Onshore in Riohacha, as the 900-foot-long Comfort towered nearby, a church bell peeled as patients lined up at a school next door for medical care. A health worker kept order with a megaphone as classrooms were turned into examination rooms. And Venezuelans who needed information seemed to gravitate toward doctors like Raquel Girón — if only because they heard her Venezuelan accent.

“I help with triage and also with translations, because sometimes there are language barriers between the Venezuelan and Colombian patients and the US navy doctors,” said Girón. 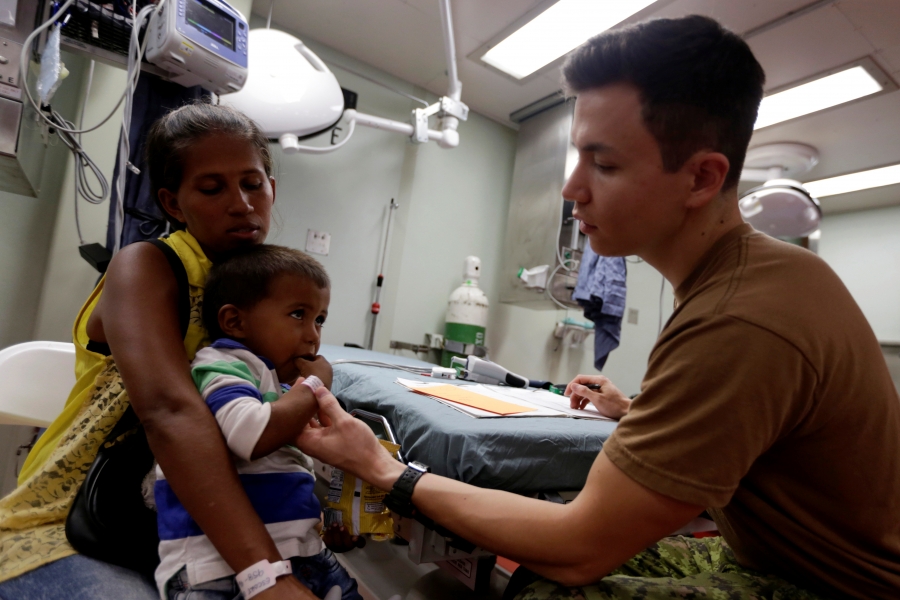 Patient is attended by staff of the United States Navy hospital ship USNS Comfort, off the coast of Riohacha, Colombia Nov. 27, 2018.

Girón herself left Caracas, Venezuela, three years ago — not just because of the impossible medical conditions but also the repressive political situation for doctors there under the authoritarian socialist regime.

“The situation is really hard for the physicians,” she said. “You say something is wrong, and you — you are in trouble.”

So Girón came to live in New Jersey. She joined the Venezuelan-American Medical Association, or VAMA, an expat doctors group based in Miami that does outreach to Venezuelan refugees and arranged the Comfort volunteer crew.

“Oh my gosh,” Girón said, “immediately I wanted to join this mission to help people from Venezuela.”

And to help, she added, “people from Colombia” — as a way to thank Venezuela’s next-door neighbor for taking in the vast majority of Venezuelan refugees in recent years.

There has, in fact, been growing tension between poorer Colombians and the hundreds of thousands of Venezuelan refugees there: many of the former feel the latter are taking away jobs and receiving preferential treatment from international organizations like the UN’s World Food Program. 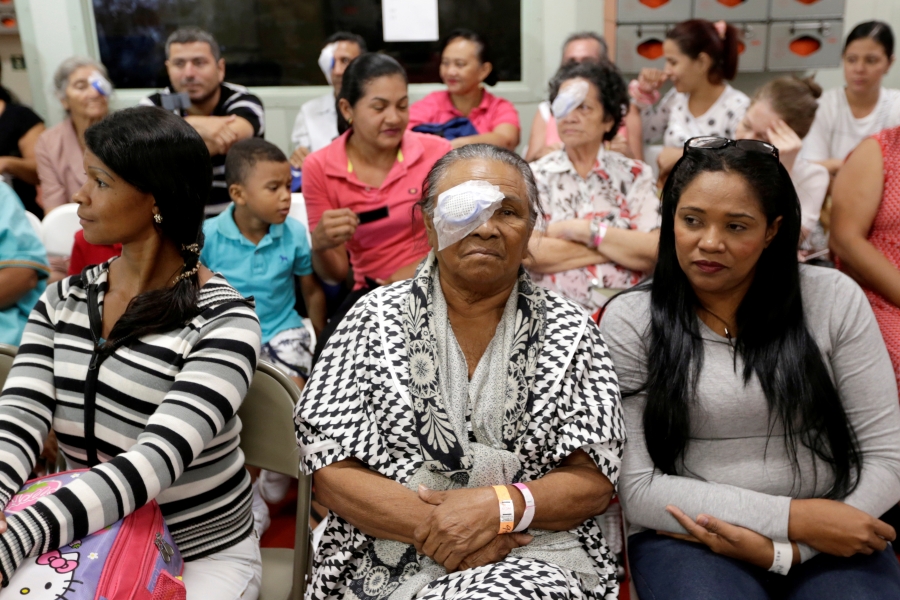 Colombian and Venezuelan patients are seen after treatment at the US Navy hospital ship the USNS Comfort, off the coast of Riohacha, Colombia Nov. 27, 2018.

But 59-year-old Colombian laborer Oscar Ovalle of Riohacha said he could forget about all that last week when he emerged from a Comfort post-op room with a patch on his eye and a grin on his face. As a young man he lost an eye in a car accident — and recently began losing sight in his good eye. A Comfort surgery crew that included the Venezuelan-American doctors fixed the problem.

“It’s life-changing,” said Ovalle. “Now,” he added with a chuckle, “I can go home and see how pretty my wife is.” 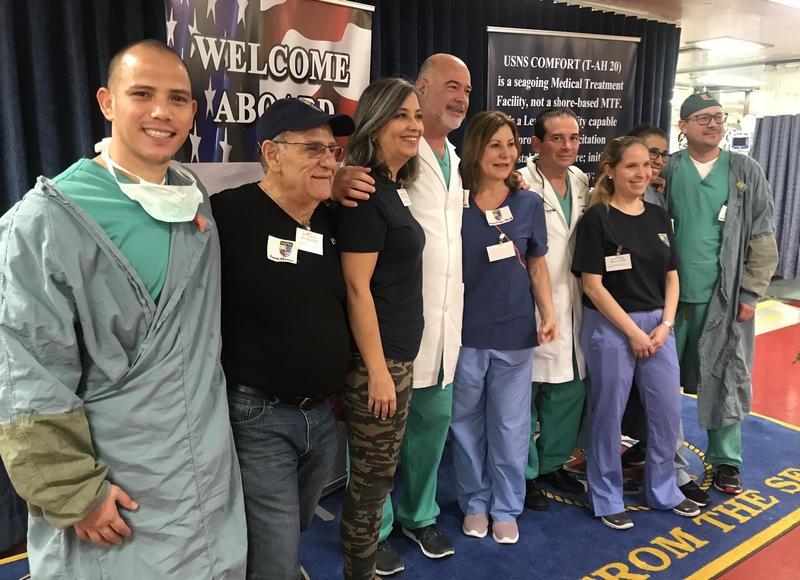