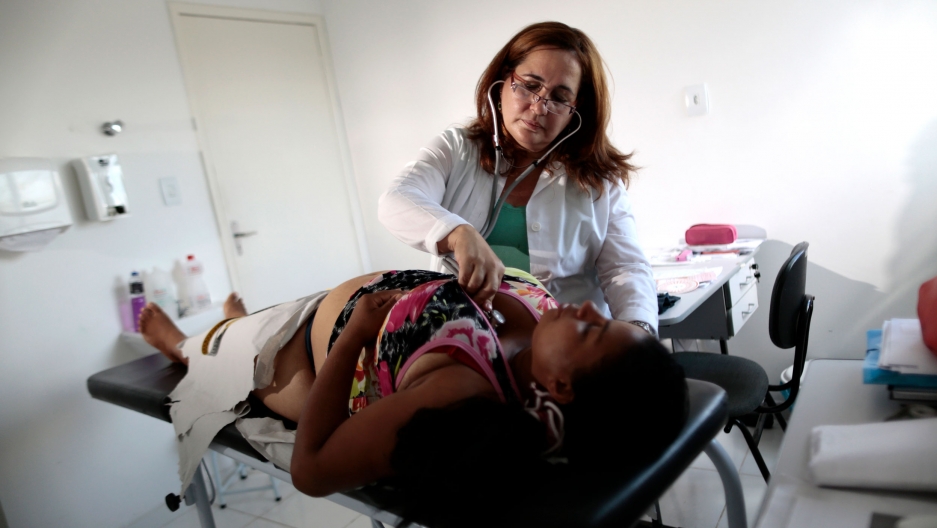 Cuban doctor Elza Vega Rodriguez inspects a pregnant patient at the Health Center in the city of Piaus in the state of Bahia, in northeastern Brazil, in November 2013. Cuba said on Wednesday it would pull thousands of its doctors from Brazil after the South American nation’s President-elect Jair Bolsonaro questioned their training and demanded changes to their contracts.

Cuba said on Wednesday it would pull thousands of its doctors from Brazil after the South American nation’s President-elect Jair Bolsonaro questioned their training and demanded changes to their contracts.

The far-right Bolsonaro, who takes office on Jan. 1, said in an interview this month that the 11,420 Cuban doctors working in poor and remote parts of Brazil could only stay if they received 100 percent of their pay and their families could join them.

Under the terms of the agreement with Cuba, brokered via the Pan American Health Organization, Havana receives the bulk of the doctors' wages.

While the Cuban government retains a portion of the payment, the doctors themselves receive housing and food stipends from the local government of the cities where they're stationed.

Bolsonaro threatened to break off diplomatic relations with Havana over the program, saying it trampled on the rights of the doctors by handing the Cuban government 75 percent of their pay and denying mothers the right to have their children with them. He also questioned the qualifications of the Cuban doctors and said they would have to renew their licenses in Brazil.

Cuba's Health Ministry rejected Bolsonaro's comments as "contemptuous and threatening to the presence of our doctors" in a statement announcing its withdrawal from the program.

"These unacceptable conditions make it impossible to maintain the presence of Cuban professionals in the program," the ministry said in a statement.

In 2013, former President Dilma Rousseff started this program, called Mais Medicos, which aimed to place doctors in far-flung cities and poor urban areas in Brazil. Doctors from Brazil joined the program as well as a large contingent of Cuban doctors.

According to Brazil’s Health Ministry, 8,332 Cuban doctors work in the More Doctors Program, accounting for almost 45 percent of the 18,240 openings across Brazil.

Cuba has been sending its doctors to missions abroad for five decades in what some have called Cuba’s “health diplomacy.” The foreign medical program deploys health professionals to practice abroad as part of bilateral agreements, bringing health services to poor, urban neighborhoods and remote rural communities in developing nations. According to the Cuban Health Ministry, in the past 55 years, more than 400,000 Cuban health workers have worked in 164 countries. Currently, there are Cuban medical teams stationed in 67 countries around the world.

Cuban medical brigades have also been deployed as a response to natural disasters or health emergencies such as the 2014 Ebola crisis in Sierra Leone and the 2010 Haiti earthquake.

For Cuban doctors, who reportedly earn just over $60 a month working on the island, being part of the foreign program has a financial incentive. Salaries paid to Cuban doctors working abroad are significantly higher.

What happens to Brazil’s program?

“Mayors of towns across Brazil where Cuban doctors were stationed were upset at this news, saying that it will take a long time to fill these vacancies,” Osborne told The World. “Brazil’s President Michel Temer has been meeting with those in local governments.”

The Brazilian Health Ministry has established an emergency measure to fill the more than 8,000 openings for doctors in 2,800 cities and 34 Indigenous districts across the country that will be left open by the withdrawal of Cubans from the program. The measure aims to hire qualified doctors from Brazil and other countries that can start to work as early as Dec. 3.