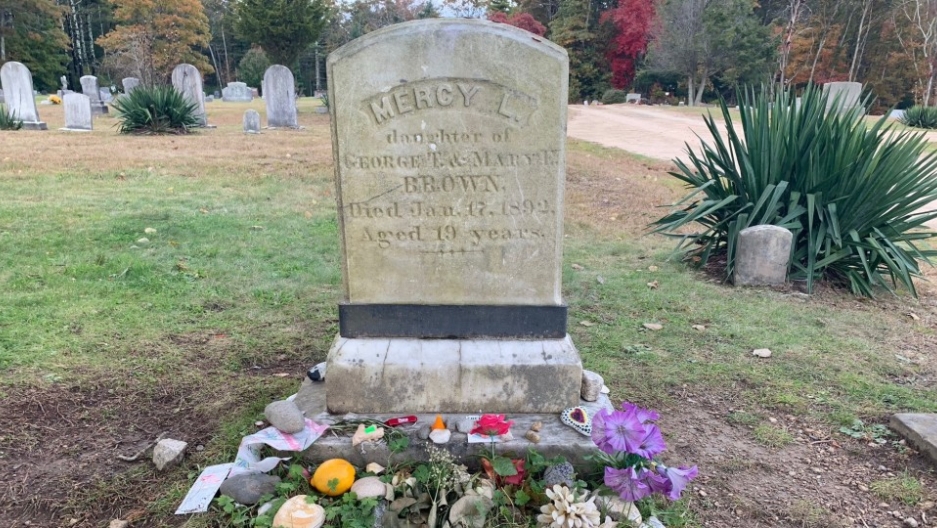 The Chestnut Hill cemetery in Exeter, Rhode Island is like a lot of cemeteries in New England. It’s lined by trees and dotted with weathered grave stones stretching back centuries. The steeple of an old wooden church towers over the pastoral field. And yet —

"People are in here all the time," explained Joyce Bastien, an Exeter local. "All ages, all types of people, everything. Nonstop."

They come from far and wide because of what happened here one March night in 1883.

Young Edwin Brown was dying. Just as his mother, Mary, had died. Just as his sisters Mary Olive and Mercy had died. As author Michael Bell explained, Edwin’s father, George Brown, had tried everything to save him. Or, at least, nearly everything.

"Neighbors and other relatives, they were aware that if Edwin died and it took out all of the Brown family, that it wouldn’t stop there — whatever 'it' was," said Bell.

And so, George Brown — despite some misgivings — relented. There was only one way to know for sure if one of his deceased family members was now the un-dead creature consuming his son to feed its own unholy immortality. They had to dig them all up. First, Mary and Mary Olive.

"They were basically decomposed, as you would expect them to be, since they had been dead for several years," said Bell.

But Mercy — just 19 years old when she died — had been lying dead in a crypt for two months. It was likely the winter weather that had kept her body from decomposing, and why her heart still contained liquid blood. Nevertheless, to the small group there, these were the tell-tale signs.

Mercy Brown was a vampire.

"So, they cut out her heart and burned it to ashes on a rock, by the site," said Bell. "Edwin was supposed to take the ashes to consume. Drink them in water."

We don’t know for sure whether Edwin did consume them, but we do know he died not long after. Just as his sisters had. Just as his mother had. They died of tuberculosis — known then as consumption. The Mercy Brown incident was the last known case of The New England Vampire panic.

This particular brand of folklore was a variant on a practice born in places like Romania, Hungary and Germany. The idea was that one of the dead victims was not, in fact, dead but keeping itself alive in its grave by feeding on the blood of the living. To stop it, you had to find it. And eradicate it.

"They would usually cut out that organ that had the fresh blood, whether it was the heart, liver, lungs, whatever," explained Bell. "Sometimes the whole body was burned."

"Most of the time I’m dealing with the vampires of folklore and history," said Bell, a PhD in mythology who has researched and written extensively about the New England vampire panic. "And basically, what they were, were rotting corpses. Just not rotting fast enough."

Over the course of a century, at least 70 ritual exhumations like the one in Exeter, Rhode Island were performed throughout New England. They were attempts to stop the spread of the devastating and then little-understood disease of tuberculosis among families, mainly in rural communities.

"There are times in life when you need to have an answer. You need to have a course of action. To actually do something and not just sit there and watch your family die," said Bell. "And so, folklore provided an avenue for this. A door, really, from fear and disease into hope."

Bell says these practices were likely introduced to New England by traveling quacks. And this same curious, magical folk practice also provided inspiration to European writers, who developed their own version of the vampire myth, one we know well today through pop culture and fiction.

"The vampires in New England were real," said Bell. "They just happened to be microbes. They were germs with fangs."

Fear of the unknown is a powerful force. By the 1800s New Englanders knew there had been no witches in Salem in the 1600s. And today we know there were no vampires here in the 1800s. But Bell says, don’t be so quick to judge. We may have access to far more information today, but we’re no more inherently intelligent than the people of the past. And 200 years from now, who knows which of our beliefs and practices might seem utterly ridiculous.

A version of this piece originally appeared on WGBH.org.