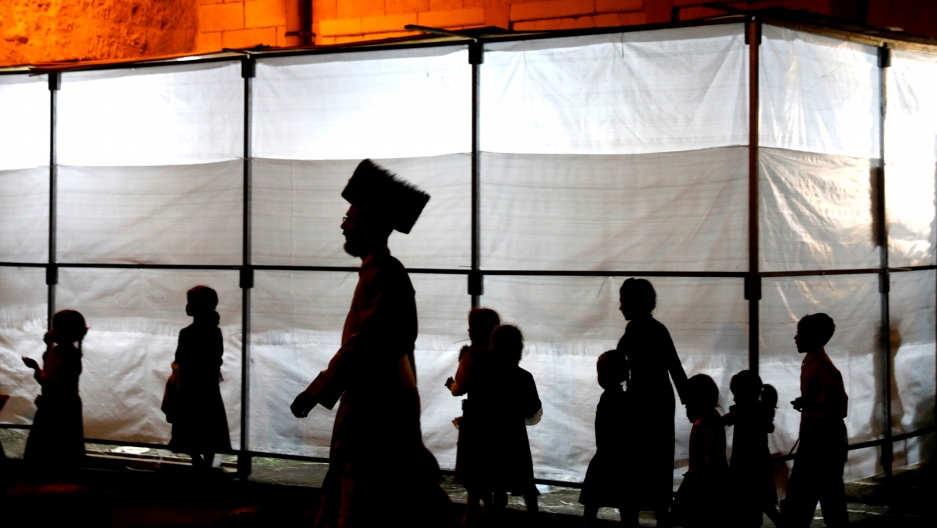 An ultra-Orthodox Jewish man walks next to a synagogue during the celebrations of Simchat Torah at the Mea Shearim neighborhood of Jerusalem, Oct. 1, 2018.

The hottest TV shows in Israel right now are not about sex, drugs or violence. Instead, they are about the insular Haredim, or ultra-Orthodox Jewish communities, whose everyday dramas — albeit fictionalized — are Israeli TV’s latest obsession.

This cultural phenomenon will also soon hit the US. Marta Kauffman, who co-created American TV shows like “Friends” and Netflix’s “Grace and Frankie,” has adopted the breakthrough Haredi family drama “Shtisel” for US audiences.

"It's a really good show about people that you really invest in, that's what attracted me," said Kauffman. 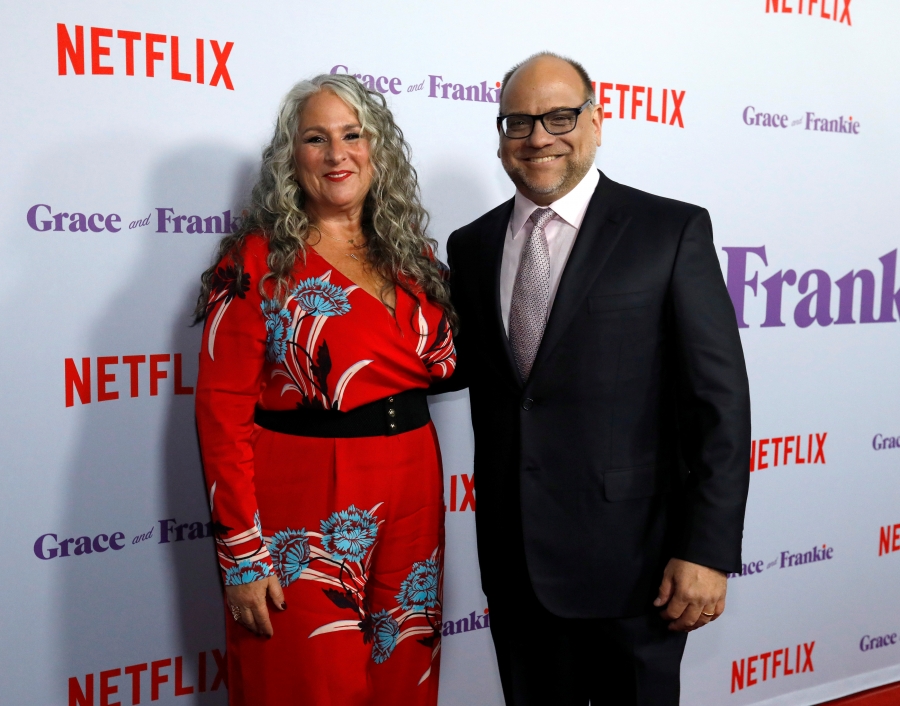 Show creators Marta Kauffman and Howard J. Morris pose at a premiere for the television series "Grace and Frankie" in Culver City, California, US, Jan. 18, 2018.

While watching the original Israeli show “Shtisel,” Kauffman saw a natural comparison to the large but insular ultra-Orthodox communities in Brooklyn, New York, who are often experienced as "the other."

"It's a show … where you have to take some time to humanize what is unknown," Kaufmann said. "And that’s the thing I really thought would speak to an American audience.”

“Emmis,” the American version, follows a multi-generational Haredi family from a fictional sect in modern-day Brooklyn.

“Shtisel,” which is based in an ultra-Orthodox neighborhood of Jerusalem, has been jokingly described by one of its actors as the “Sopranos of Israel” — but with cholent, a traditional Jewish overnight stew, instead of violence.

Tzippy Yarom, 37, a journalist at the ultra-Orthodox Hamishpacha (The Family) newspaper says she isn’t surprised the show has attracted such a large audience.

“The other is always interesting," said Yarom, who is part of a Haredi community in Jerusalem. "We live in a world where you are busy with other people's lives. … Even though these shows are not reality TV, it is something that gives them [viewers] the feeling that they’ve touched something secretive and unknown.” She added, “In a way, it’s also a problem, so then they [viewers] think they know. And they don’t.”

Haredim often speak Yiddish, an eastern European Jewish language, rather than Hebrew, and dress in modest, often black outfits in keeping with the styles of their predecessors in places like Poland and Lithuania. (Men traditionally wear suits and large black hats, with each sect or tradition having its own specific style.) 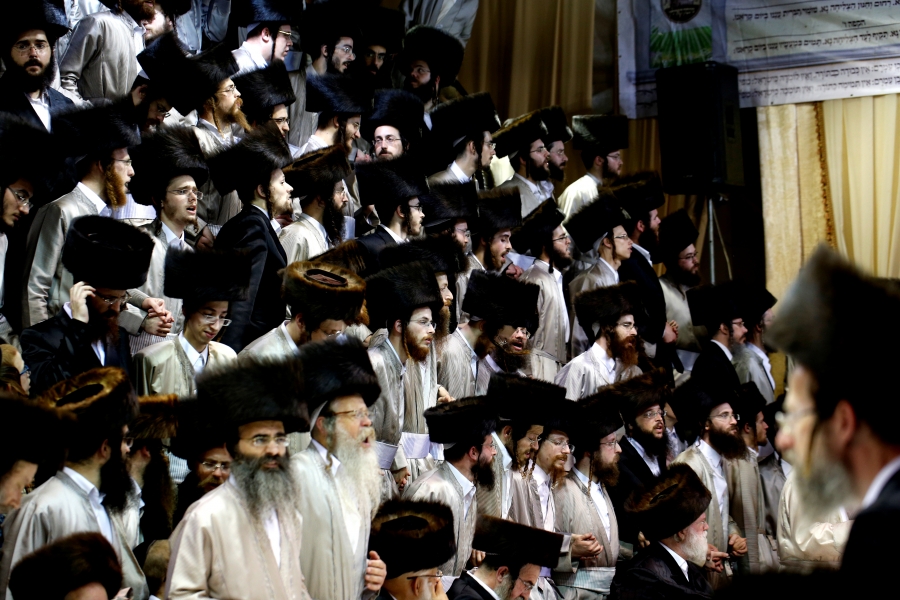 Ultra-Orthodox Jewish men take part in the celebrations of Simchat Torah in a synagogue at the Mea Shearim neighborhood of Jerusalem, Oct. 1, 2018.

Though Haredim as a whole aim to isolate themselves from secular society, seeing it as a threat to their traditional way of life, a recent string of popular shows about these closed-off and highly conservative religious communities have emerged.

It’s a timely endeavor, as Israel's Haredim are 12 percent of the population and growing fast due to their high birth rate. Their political parties are key brokers in Israel's parliament and municipal government. The Shas and United Torah Judaism parties are two of the six parties forming the government’s current ruling coalition. Essentially, legislation can’t be passed without the support of the ultra-Orthodox parties.

Relations are consequently tense between Haredi and secular or less religious Jewish Israelis.

Many Haredi men do not work and most refuse to serve in the Israeli army, which is mandatory for all Jewish Israelis. Instead, the state pays Haredi men to study Torah, the Jewish holy books, which they consider their religious duty. They believe that they are commanded by God to preserve the Jewish people by devoting their lives to studying sacred texts.

Last year, Israel's Supreme Court struck down the Haredis’ long-standing exemption from military service. Haredi communities have responded with constant protests and vow to disrupt politics, such as pulling out of a government coalition, if the status quo is not maintained. 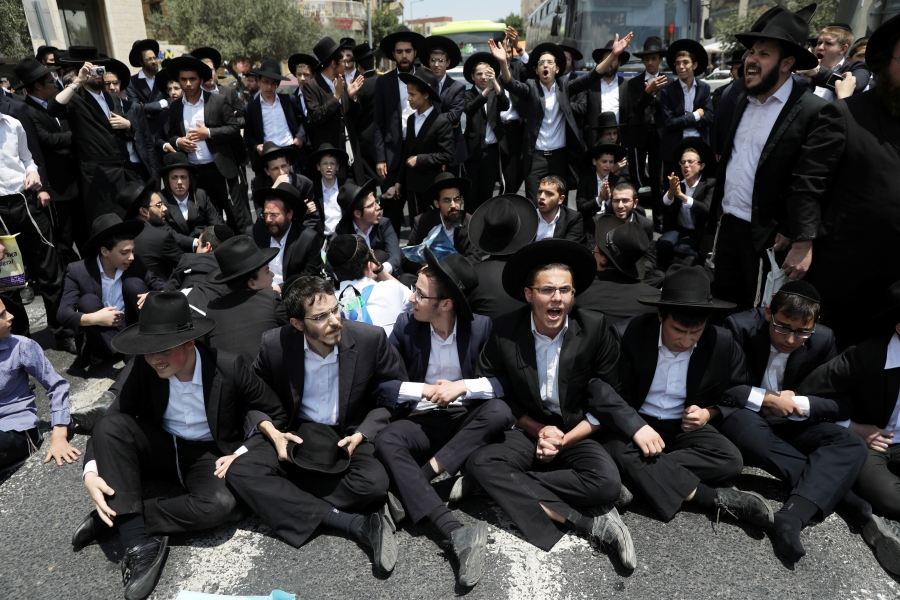 Ultra-Orthodox Jewish men protest against the detention of one of their community members who evaded a military draft order, in Jerusalem, Aug. 2, 2018.

Many Israelis resent these communities for their hostility to the modern state and society. Seventy-seven percent of Israelis view the tensions between secular and ultra-Orthodox Jews as the biggest conflict in Jewish Israeli society, according to the 2018 poll by the Israeli organization Hiddush.

A different side of the Haredim

For the first time on television, the public is seeing a different side of the Haredim — one that's not simply dark, dreary and repressed, said Shayna Weiss, a professor of Israel studies at Brandeis University, whose research has focused on Israeli TV.

“Shtisel’s” dramatic portrayal of a multi-generational family kicked off the trend in 2013. In “Shtisel,” the characters’ insecurities, unrequited loves and family dramas are universally relatable themes.

Another show, “Kipat Barzel,” which literally means “Iron Yarmulke” in Hebrew but translates to “Commandments,” premiered in 2017. It’s an action drama set around a rare ultra-Orthodox unit in the Israeli military. The show intermingles the polarizing topic of ultra-Orthodox military service with tantalizing relationships and plot twists.

Eliran Malka, the director of “Shababnikim,” grew up in a Haredi community. He's since left and studied film at one of Israel's premier schools, Ma’aleh, in Jerusalem. Now, he aims "to bridge the gap" and "to make the Yeshiva world accessible," he told Mako, an Israeli news site. (Malka did not respond to questions when contacted by PRI.)

This cultural phenomenon is the product of several social and technological trends, said Weiss.

“People [who've left their community] have studied film and now they are working to create something more authentic … formed from within and about the community," said Tamar El Or, a professor of anthropology at Hebrew University of Jerusalem, citing “Shababnikim's” Malka as one example.

Like the US, Israel's TV economics are also changing. As the market fractures, with more ways and places to watch shows, there's a greater demand to fill. Haredim meet both a desire for greater diversity on TV and for a "true human interest story," said Weiss. Weiss also attributed the trend to what she called the "The Fauda effect” — Israeli producers are looking to make a show that will become a hit in America the way the popular Israeli TV show “Fauda” did. It is now on Netflix.

‘A huge viewing in Haredi communities’

As is common in Haredi communities, Yarom, the journalist with Hamishpacha, does not own a TV — but like some Haredim, she does use the Internet. (For the Haredim who do use the internet, there’s a “kosher internet” option that blocks sites deemed inappropriate.) She watched clips from “Shtisel” online after people kept asking her about the show’s content.

She said the show "had a huge viewing in some Haredi communities” though no specific data is available. But she also cautioned that the dramatizations did not always reflect real life.

“They make it too dramatic, so it's out of touch,” Yarom said. “It never gives you a real conception of what the Haredi world is.”

Yarom said she appreciated the authenticity of the clothing and language in “Shtisel.” But she said she also found many generalizations and improbable plot points. For example, in one ongoing plot point, a character balked at his community’s matchmaking traditions. In another, the family’s grandmother suddenly becomes obsessed with TV in her nursing home.

Yarom also worried that the show’s sweeping portrayals glossing over distinctions between various ultra-Orthodox communities and subgroups could be damaging — outsiders can't always distinguish between what's realistic or fictional.

“Shababnikim” was far less well-received among many Haredi commentators, who dismissed the dapper-dressed and consumer-obsessed personas of the young Yeshiva boys as “fringe.”

In a Facebook post, Malka said he wasn’t claiming to imitate real life and called some criticisms “petty,” like the one about how a character’s socks were too colorful.

“Those who would like to see the real and average life, take bus line 33 to Hapisga Road [a street in a Jerusalem Haredi neighborhood] and turn around,” he wrote.

Still, like any cultural phenomena, the impact of these TV shows is felt in different and unexpected ways. Weiss said that a made-up nigun, or melody, used in “Shtisel” has now become popular among some Haredim.

Kauffman told PRI that the first episode script of “Emmis” for American audiences is all set to film in Brooklyn.

"My deepest wish is that we do justice to the original," she said of one of the challenges of “Americanizing” it. "Still making it our own, but retaining what made the original so special."