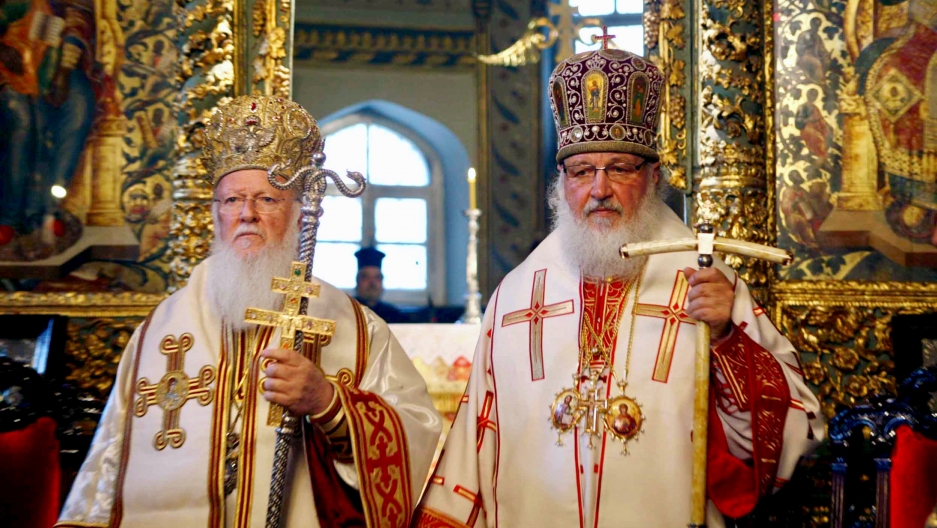 “Schism in the church!”

That sounds like something out of a world history textbook, not a 2018 news headline. But it’s actually one of this week’s biggest international stories.

The Russian Orthodox Church has cut off all ties with the leader of the Christian Orthodox mother church in Istanbul, the Ecumenical Patriarch Bartholomew I.

The flashpoint of this dispute is in Ukraine. And, perhaps there’s little surprise here, a lot of it has more to do with politics than with religion.

Vladimir Putin sent Russian troops into eastern Ukraine in 2014, stoking bitter divisions there. Since then, the question of what becomes of the Ukrainian Orthodox Church has intensified.

Ukrainian nationalists want their church to be free of Russian control, which dates back to the year 1686, when the Constantinople patriarch signed an agreement to give religious leaders in Moscow authority over the Orthodox Church in Ukraine.

Last week, Bartholomew overturned that centuries-old agreement and opened the door for an independent Ukrainian Church. It was essentially a green light for churches in Ukraine to break away from Moscow.

“We are hoping common sense will prevail and that the Constantinople Patriarchate will change its relations to existing church reality,” said Metropolitan Ilarion, spokesman for the Russian Orthodox Church. He accused Constantinople of backing a schismatic church and said that the ball was now in its court to rectify the situation.

Ukraine's president Petro Poroshenko welcomed the decision by Bartholomew. And Poroshenko said the Russian church's decision to cut ties with Constantinople, "puts itself on the path self-isolation and conflict with the whole international orthodoxy."

“This is a major, major event,” says Alexander Motyl, a political scientist at Rutgers University, “for Orthodox believers, but especially for Ukraine and Russia.”

From the perspective of Russian nationalism, Motyl says the Ecumenical Patriarch's actions are a disaster.

“Granting independence to the Ukrainian Orthodox Church has all sort of implications for Russia, its identity, its history, and none of them is very positive,” Motyl says.

“They undermine Russia’s claims to be not just the one true church, but this magnificent country which is the repository of a long historical tradition.”

Motyl says Russian nationalists — including Putin — see Ukraine as the birthplace of the Russian empire and the Russian Orthodox Church. Any break between the church, Ukraine and Moscow, he adds, gives Ukrainians one more reason to think of themselves as separate from Russia.

The rift is tearing into the global Orthodox Church.

“I don’t think it would be any secret that there’s been, for many years, a sense that Moscow and Constantinople vie for influence and allegiance,” says John Burgess, an expert on Orthodox Christianity at the Pittsburgh Theological Seminary.

"This doesn't come entirely as a surprise. The Ecumenical Patriarch in Constantinople has steadily shown his hand, and the Russian Orthodox Church out of Moscow has shown its stance. There's been a growing sense of confrontation, stepping to the brink."

The Moscow-Constantinople is compared in news reports with the Great Schism of 1054, when Catholicism and Orthodox Christianity are said to have begun their separation that's turned out to be permanent. But Burgess and other experts say that is a stretch.

"Well, I'm a Protestant and the Protestant Reformation 500 years ago surly was a more significant split in Christianity than this particular one," Burgess says.

Aristotle Papanikolaou of Fordham University agrees that the comparison with 1054 is overplayed. This latest split is about administrative and political matters, not theological ones, he says. And that is good news for Orthodox Christians like Papanikolaou, who are hoping that this rift can be fixed as soon as possible.

“When you deny the Holy Communion to the communicants of other churches,” Papanikolaou says, “that’s a big deal.”

“But it is over jurisdictional issues, and those are much easier to solve. History has shown that they tend to get solved in ways that debates over the Trinity or other [spiritual] matters are much more difficult to resolve.”

Papanikolaou worries, however, that this split could take years to repair. Maybe even decades.

The divide is stirring up anxiety among Orthodox believers around the world, including in the United States.

Archpriest Victor Boldewskul, Parish Rector at Holy Epiphany Russian Orthodox Church in Boston, says many of his parishioners come from Ukraine or have relatives still living there.

"Most of them are very disappointed, to say the least, at the decision of the Patriarch of Constantinople interfering in the canonical affairs of the Russian Church,” Boldewskul says. “Why now? Why in the middle of this political struggle? If this is clearly a spiritual decision, then waiting a few years would probably be beneficial. This is not the time to do it.”

And there are practical concerns for Orthodox families here in the US as well, says Father Thomas Soroka of St. Nicholas Orthodox Church in McKees, Pennsylvania. In Russia, people who belong to Orthodox parishes would not have connections with people from churches that fall under the jurisdiction of Constantinople, Soroka says.

“In America, these are our neighbors. These are maybe even our family members. I have people in my own parish whose family members, because they live in another part of town, go to a church under the Ecumenical Patriarchate. So, this causes tensions and this causes very difficult, awkward situations,” Soroka says.

The split has prompted some church leaders to call for convening a pan-Orthodox council, where clergy from all the different branches of the global Orthodox Church would convene to sort out this disagreement. The archbishop of Washington added his name to those calling for a pan-Orthodox council.

"We are deeply aware of the pain and trauma in the life of Orthodox people caused by ecclesial schism which weakens Orthodox witness and evangelism in society," said Metropolitan Tikhon, Primate of the Orthodox Church in America, in a statement.

But other senior leaders from different corners of the Orthodox world have started speaking out and taking one side or the other, in what could turn out to be the most significant divide in Orthodox Christianity in recent history.