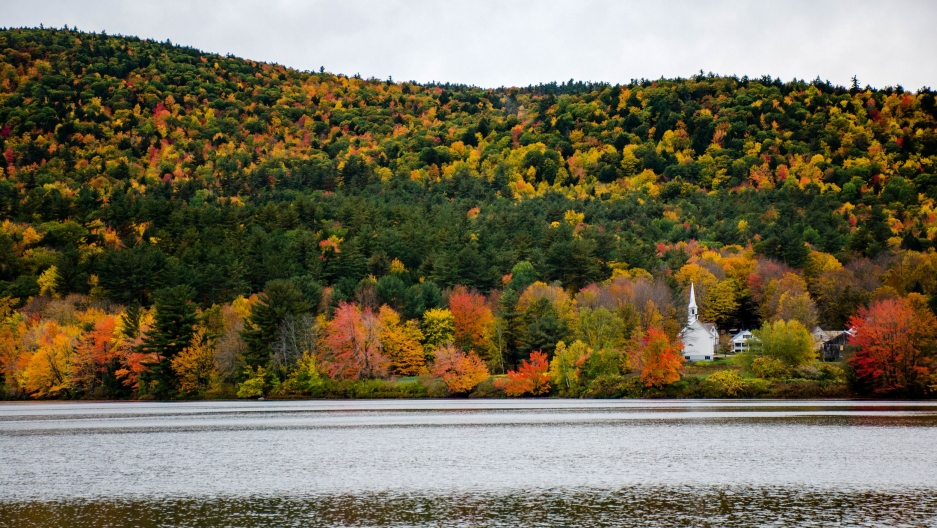 Take a stroll around Boston right now and there are plenty of trees to gawk at and admire.

“The branches are turning kind of a brilliant yellow, orange and red, and that's what makes this tree so amazing,” says Richard Primack, a professor of plant ecology at Boston University, looking at a Norway maple in Newton, Massachusetts, just outside of Boston. “It doesn't just turn one kind of color, it turns lots of different colors.”

“The chlorophyll starts to break down and the tree starts to reabsorb the nutrients into the twigs. And what this does is it exposes the yellow and the red pigments, which have always been there but have been hidden by the chlorophyll," Primack says.

In New England, fall foliage is glorious. And big business. The yellow, orange and bright scarlet leaves are a multi-billion dollar industry for the regional economy, bringing millions of visitors annually from across the globe. To Primack, New England offers the most spectacular fall foliage in the world.

“People acknowledge this. In Europe or in Asia, people just don't have this kind of amazing fall foliage,” says Primack. “There isn't this variety of color and variation of color from year to year.” 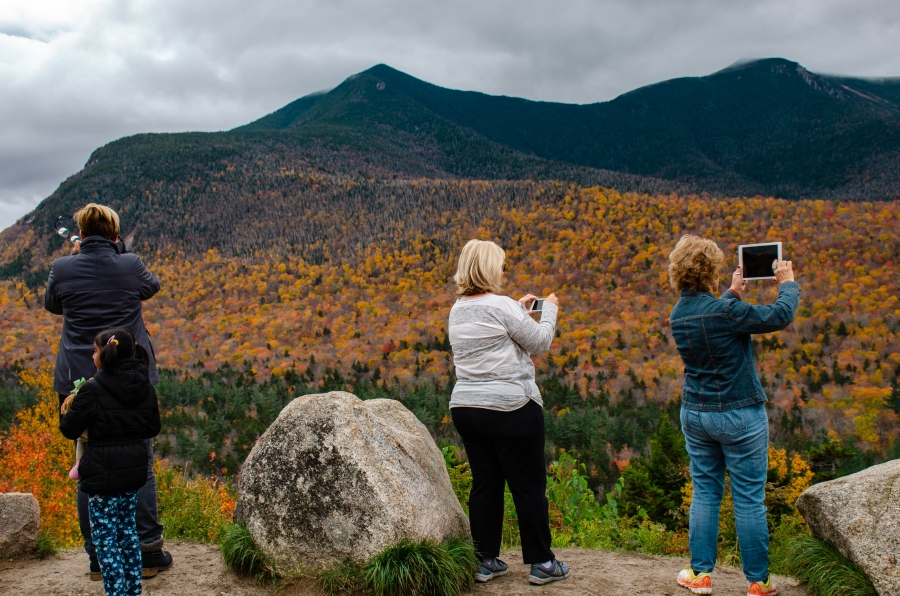 The 34-mile Kancamagus Highway, a path cut through New Hampshire’s White Mountain National Forest, is one of the most popular leaf peeping spots in New England.

But climate change is altering the “leaf peeping” season, as it’s called in New England. The peak of fall foliage season lasts only about two or three weeks and is shifting as New England warms up. Fifty years ago, peak season would’ve been just about over by now in Boston.

“Now, we don't really have a peak of fall foliage until the middle of October or maybe even the third week of October. So this is really kind of a big change in the fall foliage season caused by climate change,” says Primack. 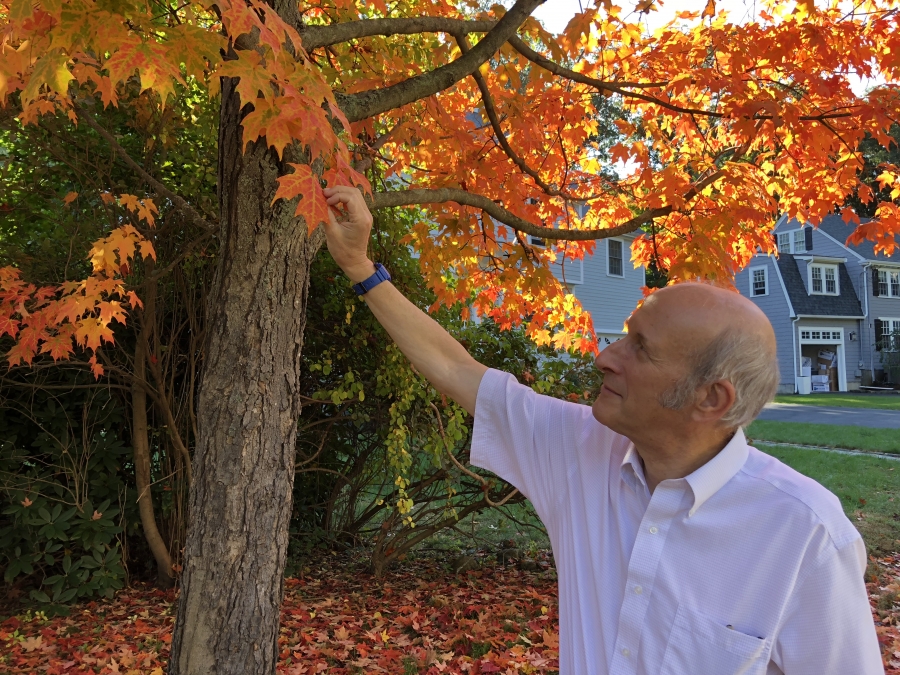 Biologist Richard Primack with Boston University examines the leaves of a Norway maple in the Boston suburb, Newton, Massachusetts.

Biologists are tracking this through manual observation, meteorological stations, satellite imagery, and a network of digital cameras, the so-called PhenoCam network run by ecologist Andrew Richardson out of Northern Arizona University.

Côté keeps an overflowing binder stuffed with weathered, hand-written papers going back to the 1930s.

Knowing precisely when the leaves peak is critical for businesses in New Hampshire — and for visitors planning a trip. Many people consult the pancake house’s historical log online before planning a getaway.

According to Côté’s logs, a pattern emerges since the mid-1970s: leaf peeping season extends a week to two weeks later, backing up what the biologists have found. Also, the leaves are starting to change earlier. Warmer, drier summers may be causing this. So, these days foliage season is actually longer.

And more popular than ever. 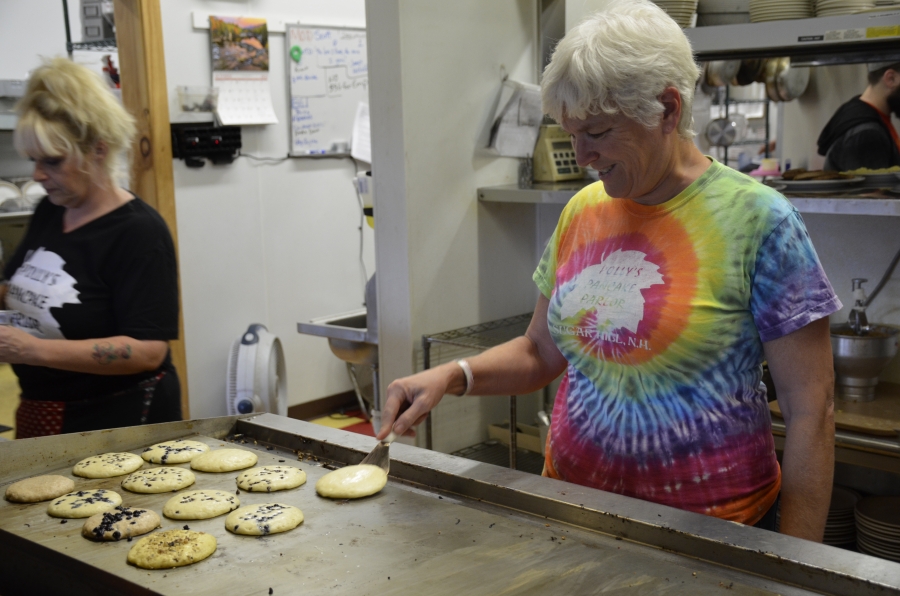 So that’s this season, but …

“I worry about the long-term,” says Christopher Bellis, owner of the Cranmore Inn, a bed-and-breakfast originally built during the Civil War in North Conway, New Hampshire. He’s worried about how things will change as his two kids grow up and the climate shifts.

Individual trees don’t get up and move, of course, but the classic New England forests and ecosystems, as a whole, may shift over time as the climate changes. And even in the here-and-now, the milder climate is a mixed blessing.

“It may be good for my foliage business. But climate change is not necessarily good for my winter business,” says Bellis.

North Conway is a ski town, and like all businesses around the area, Bellis’ Inn also relies on cold, snowy weather. And that’s a worry as winters in the northeast have become steadily warmer and less predictable.

When it comes to fall leaves, less predictable seasons combined with weather apps — even leaf peeping apps — means people are waiting until the last minute to book rooms.

“And then they all drive up for the weekend or they come up for a day trip or they'll come up for one or two nights,” says Jen Kovach, co-owner of the Snowvillage Inn, a bed-and-breakfast with mountain views in Eaton, New Hampshire. 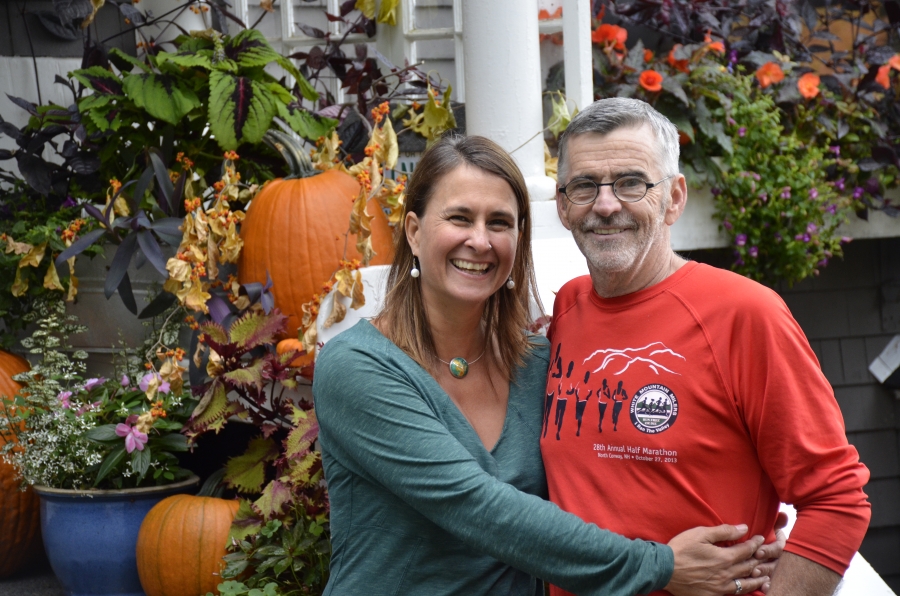 All of this can make her life stressful, planning staffing and supplies on short notice. It’s far from an existential business threat — nearly 3 million tourists came to New Hampshire last fall, visiting from around the world. But Kovach sees warning signs.

“We serve local maple syrup for breakfast and I want that to continue, but they're saying that the maples are a little bit distressed and that’s upsetting.”

Maple syrup is a big part of the local economy. The trees aren’t just pretty to look at when the leaves change — when the weather gets too hot, it’s harder for the maple trees to produce sugar. Warmer weather is also allowing insect pests to flourish, putting forests at further risk.

Right now, the changes are slow moving. Still, Kovach says we all need to be paying attention.

“We notice those subtle changes, like maybe there's different birds here. But it doesn't affect enough people to maybe recycle a little bit more or change the kind of car they drive or whatever else,” says Kovach. “We live up here because it's beautiful and we are surrounded by nature. You kind of fall in love with the maple trees in your area.”

So have countless others. Right now, New England’s leaf peeping economy remains robust. But at some point, climate change and its slow-moving impacts on the forests here will take a toll.  That is, unless, the world takes drastic action soon to tackle the problem.