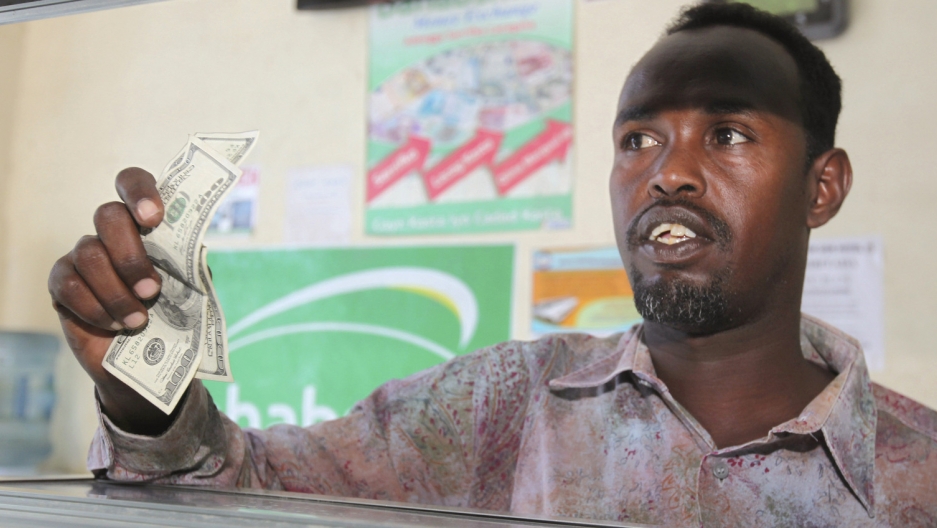 A customer receives US notes from a teller at the Dahabshill money transfer office in Mogadishu, Somalia, Feb. 16, 2015.

A recent World Bank report showed that Somalia has one of the most active mobile money markets in the world, outpacing most other countries in Africa. It’s even superseded the use of cash in the country of 14 million people. Victor Owuor asked Tim Kelly, an information and communications technology policy specialist at the World Bank and the report’s author, to explain the findings and what they mean for the country.

Why is mobile money so successful in Somalia?

Mobile money initially started as a simple exchange of airtime credit between users. Over 10 years ago, mobile network operators formalized this by offering mobile money services. It was quickly perceived as a convenient and safe way of making transactions and storing money.

In Somalia, mobile money transactions are worth about $2.7 billion a month.

Several factors have encouraged the impressive uptake of mobile money:

Many Somalis own mobile phones — about nine out of 10 Somalis above the age of 16 own one.

Nearly 60 percent of Somalia’s population is nomadic, or semi-nomadic, and move around a great deal to find adequate grazing and water for their livestock. So mobile money suits their lifestyle and is also used to facilitate trade.

Today, mobile money also facilitates vast remittance flows which are critical to most Somali households due to a lack of opportunities in the Somali labor market. Taking advantage of this trend, remittance companies are increasingly partnering with mobile operators to transfer funds directly to recipients’ mobile money accounts.

How many people are using it and what is it mostly used for?

Our household survey data suggest that about 73 percent of Somalis above the age of 16 use mobile money services at least once a month — though most use it a few times a month, and high-income earners use it a lot more. About 155 million mobile money transactions take place every month.

It’s used for a wide range of things.

One of the most common is to pay bills for purchases between $2 and $300. Mobile money is thus far more widely used than cash. Two-thirds of those surveyed use it to pay for items like water, electricity and charcoal. A third claim to use it to buy groceries, durable goods and livestock.

Close to 40 percent use mobile money to pay their children’s school fees. It’s also frequently used to send money to friends and family.

We also found that it’s being used to save money.

Currently, transactions made are mainly person-to-person payments, but there is growing uptake among businesses. We have seen that receiving salaries through mobile money has, for example, been an important factor in encouraging further uptake.

What have been the benefits and the risks of this growth?

Somalia lacks a strong formal banking system. Only about 15 percent of the population has a bank account. Mobile money has helped to expand financial inclusion.

For vulnerable groups, it’s a convenient and fast way to access money quickly. And because it’s viewed as faster and safer than cash handouts, many aid agencies use it to reach remote villages.

As most shops accept mobile money, it also offers beneficiaries more flexibility and avoids a requirement to travel, which can, in turn, minimize the risk of security incidents.

Nevertheless, there are some considerable risks in the mobile money system. The biggest is a lack of regulation which makes the system fragile and fragmented.

It is also vulnerable to money laundering and terrorism financing. This is because there is a weak “know your customer” compliance, in line with global banking standards, meaning few SIM cards and mobile money accounts are registered using a valid form of identification. Ultimately, this results in limited accountability and tractability.

Another risk is the fact that there’s no assurance that the funds will always be available, as they would be in a normal bank account. That’s because there’s no guaranteed parity between the mobile money balances held by mobile operators and those held in individual and business accounts.

Transfers in Somalia are predominantly available in US dollars, which isn’t healthy for the country’s economy. This is changing — for example, neighboring Somaliland obliges sums under $100 be made in Somali shillings.

How is mobile money in Somalia different from other African countries?

A few things are different.

Banking, telecommunications and money transfers are so closely intertwined that it's resulted in the emergence of two large conglomerates, with partnerships between a mobile network operator, bank and money transfer organization. This is not really the case elsewhere in Africa.

Also, operators have adopted a different business model based on indirect revenue generated from other services — like selling airtime. They are therefore able to offer mobile money between users as a “free” service (without transaction charges or taxes). This is not the case in many other countries in the region.

Another factor that’s different is the virtual absence of regulatory supervision despite the fact that mobile network operators control vast sums in circulation.

Operators also rely on their own distribution network, not external agents (as they do in Kenya). This means that coverage is more limited.

Victor Odundo Owuor is a senior research associate with the One Earth Future Foundation at the University of Colorado.