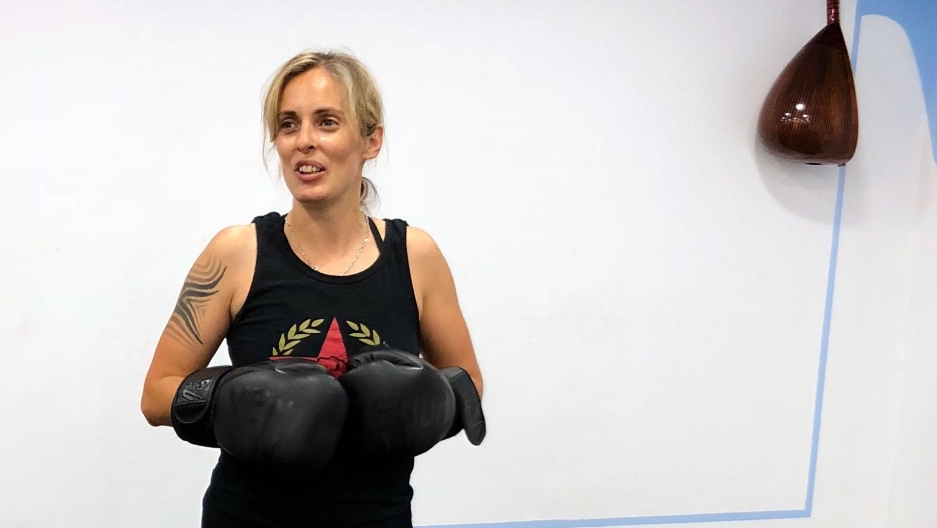 Paula Lamont is the co-owner of Solstar gym in north London.

At Solstar gym, there are no treadmills, kettlebells, weights or yoga mats — it's just one large room with a black exercise mat and a pile of boxing gloves. The gym's minimalist setting doesn't stop its co-owner, Paula Lamont, from sweating it out on a late summer day. Her trainer, Anna Zucchelli, a tall woman with a shock of pulled-back, red hair, shouts commands as she spars and kicks, while energetic music pulsates from a portable radio.

Solstar is located in the Tottenham neighborhood of north London. There's no sign on the door advertising their classes, and the only way to get the address is by emailing them and explaining why you want to come to the gym. "We want to make sure people are serious about training and about our message," said 40-year-old Lamont.

Another thing really visible at Solstar? The women. Lamont started Solstar in 2016 with Ella Gilbert, an amatuer boxer, and it's one of few women-led gyms in London.

The classes are open to everyone, though, and Lamont doesn't make a big deal out of the fact that the gym is run by women.

"The classes are always female led, but we didn't want that to define us completely. It's not something that we emblazon on our T-shirts," Lamont said. 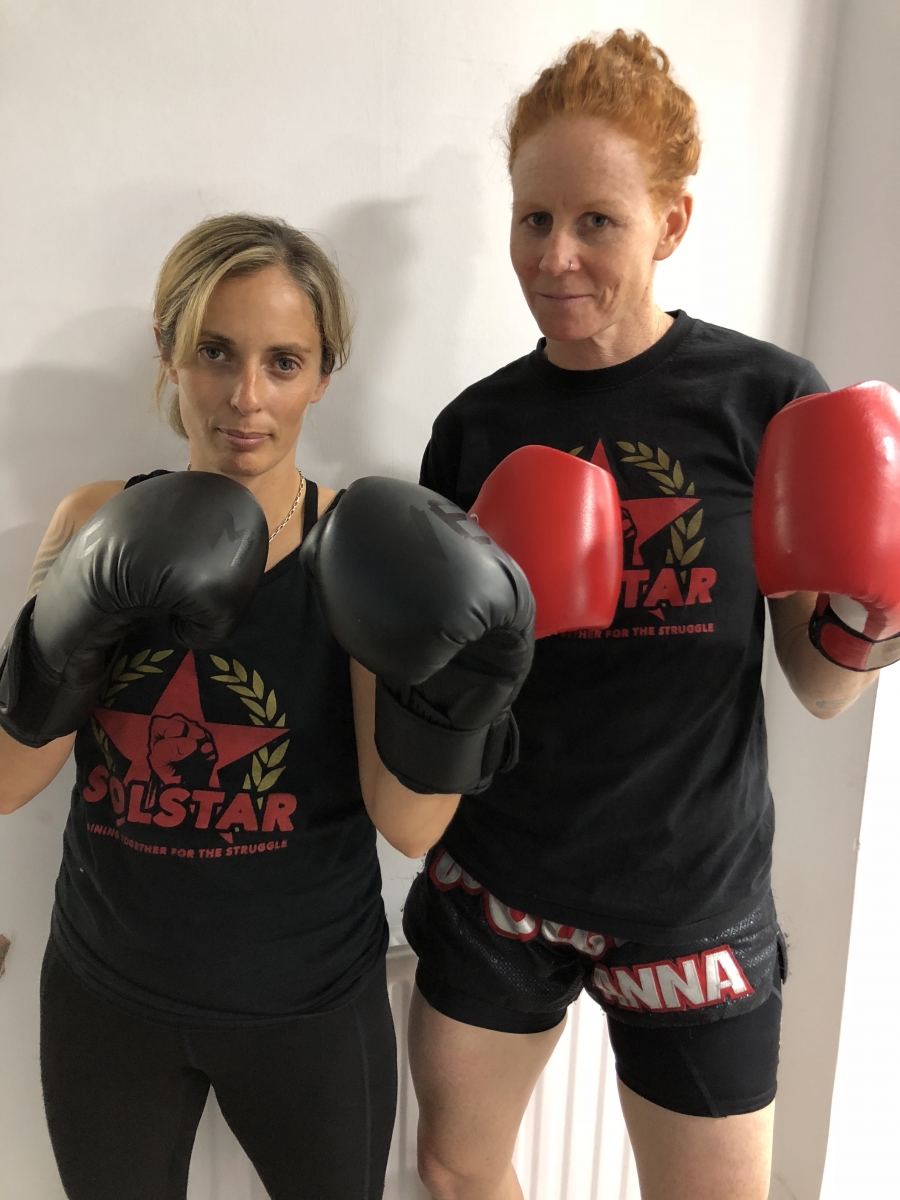 For her and muay thai instructor Zucchelli, classes are about fitness and strength for everyone, although they enjoy the lack of machismo that can be present at other gyms. Lamont wants to address some of the images of women in the media — particularly how they are portrayed as female fighters.

"We try to address the issues around body image and fitness and the cliches the media might present [of] women in a certain way," she said. "You'll see women kind of oiled up, looking all tanned and muscular in a bikini doing kickboxing. We try and counter that by showing how women really look.” Lamont is an example of how women fighters really look — without any unnatural photoshopping or airbrushing. When The World visited Solstar, she did a set of grueling exercises involving squats, one-arm push-ups and jump squat push-ups.

The space that Solstar inhabits is part of a community center for Turkish and Kurdish people who've immigrated to London and live in the surrounding neighborhood of Tottenham. Lamont likes the space and plans on offering classes tailored to people in the neighborhood. She says a few Turkish and Kurdish women have started to come and like the classes there.

Women-run gyms aren't anything new, of course. What is new is their message.

Emblazoned on Solstar's T-shirts is the motto "Training together for the struggle," with a giant star with a clenched fist.

"'Sol' is for "solidarity,"" said Lamont. Solidarity among different kinds of people and political groups, she means.

"It's obviously the socialist star."

Self-defense and fitness are part of the gym, but so are politics. Lamont trains people at Solstar for what she sees as a bigger fight — an ideological one.

Lamont is concerned about the rise of far-right groups both in the UK and the US. Just last month, far-right activists held an anti-Muslim rally in Sunderland, a city in northeast England. Counterprotesters clashed with them, shouting racist chants. She's also worried about the rise in populist groups like UKIP, or the UK Independence Party, which helped pass the Brexit referendum.

They want to equip people to physically defend themselves if they are attacked, say, at a protest or rally that turns violent.

“We don't say that violence is wrong. It's very necessary in this current political climate we're in. It's necessary that people are able to defend themselves," said Lamont, who proudly advertises that this is an antifascist gym. She believes it’s time for the left to toughen up its image — and she supports antifascist militant groups like antifa.

"I want to present the left as strong. Bold. Confident. I think there's a tendency to operate a little bit from the victim position."

Solstar was opened before Brexit and well before the Charlottesville, Virginia, riots in the United States, but the leftist message and fighting for what you believe in is always something Lamont embraced. Twice, she's pulled women to safety. She fought off a group of men who were beating a couple of women (one was dragged into an alley before Lamont called the police). Another time, she chased of a group of youths who were shouting "misogynistic abuse" at a woman on the street. Needless to say, she's tough and isn't afraid to use her boxing skills or taekwondo training.

A lot of other people embrace that position, as well. A recent Thursday class was packed. It was intro class for students wishing to take one of the boxing or muay thai classes taught at the gym. Zucchelli hollered technique instructions and encouragement over the din of punches and kicks being thrown in the room. Zucchelli also embraces the same antifascist message, but thinks it's also how you carry yourself.

“Sometimes you do need to fight back and present yourself as a confident and capable person. And being like that, you can prevent a fight in the first place,” said Zucchelli, a retired champion fighter.

Even though Solstar’s space is small, kickboxing classes like Zucchelli's are full. It seems like the message of training people to be strong both physically and politically is catching on.