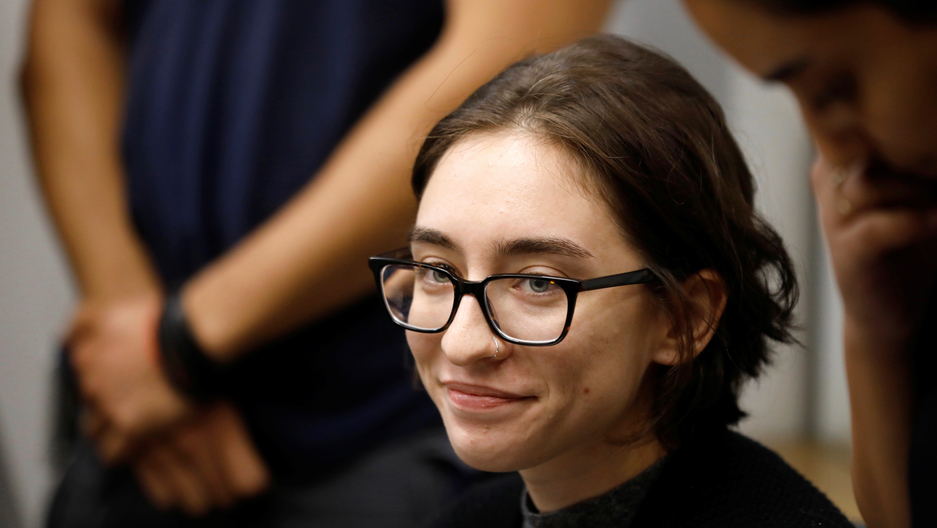 American student Lara Alqasem, 22, appears at the district court in Tel Aviv, Israel, Oct. 11, 2018. She wants to study at Hebrew University. But Israeli authorities are questioning her politics.

An American student with Palestinian roots is fighting for the right to participate in a graduate program at Hebrew University in Jerusalem.

Lara Alqasem, 22, was accepted to a master's program. She got a visa at the Israeli consulate in Miami. But when she arrived at the airport in Tel Aviv last week, Israeli authorities refused to allow her to enter the country.

Israel put a law in place last year that allows the government to ban entry to foreign activists who support BDS, the campaign calling for an international boycott, divestment and sanctions against the Jewish State. BDS activists say they want to pressure Israel to promote Palestinian independence. But the Israeli government sees the movement as an anti-Semitic campaign to delegitimize the country.

When Alqasem was at the University of Florida, she served as president of a group called “Students for Justice in Palestine.” For Israel’s minister of strategic affairs, Gilad Erdan, that’s a smoking gun of sorts. Erdan says he will reconsider letting Alqasem into Israel if she apologizes for her activism and renounces her support for BDS.

So far, she refuses.

One of Alqasem's lawyers, Yotam Ben-Hillel, spoke in court today, explaining that she left the student activist group a year and a half ago. And, in any case, the group only has eight members. Hillel said Alqasem never called publicly for a boycott of Israel, and that Israeli officials are relying on Facebook and a dossier from a dodgy anti-Palestinian group to make their case against this American student.

“Pick your hands up from the keyboard and your heads from the screens,” Ben-Hillel said in court. “How is it possible that a 19- or 20-year-old in college was a central boycott activist?”

State’s attorney Yossi Zadok painted a very different picture of Alqasem. He described her as a committed BDS activist who demonstrated against Israel and in support of a terrorist. Zadok also pointed out that Alqasem deleted her social media accounts before she arrived in Israel, suggesting that this is a common tactic among anti-Israeli agitators.

“We’re looking at actions, we have clear criteria and we believe Ms. Alqasem meets those criteria, based on her action and the actions of the organization of which she was a senior leader over several years,” said Asher Fredman, an advisor with Israel’s strategic affairs ministry.

But another of Alqasem’s attorneys, Leora Bechor, said her client will not apologize.

“The fact that Erdan is asking that of her, he’s asking to penalize her thoughts, and to humiliate her, and to claim that BDS is illegitimate,” Bechor said.

Alqasem planned to study at Hebrew University, which has itself been targeted by BDS activists. But the university is supporting Alqasem's petition. Pepi Yakireveich, a legal advisor at Hebrew University, asked the judge to allow this American student to study in Israel, where she will see for herself it this is a democratic state, not an apartheid state.

“This is just the person who will improve Israel’s reputation,” Yakirevich said.

The Tel Aviv district court judge did not give a ruling today.

Alqasem left the room, and she will return to detention at a facility near Tel Aviv airport. The US Embassy says it is providing consular assistance including welfare visits, according to an official there.

Israeli lawmaker Mossi Raz from the left-leaning Meretz Party said he and two colleagues visited Alqasem. Raz said her situation is unbearable and she must be allowed to stay and study in Israel.

“I am afraid that the pressure the right wing is [putting on the system], pressure the court again and again, make some problems to the court to decide and make a just decision,” Raz said.

One man came to the trial on Thursday as a spectator. Aharon Gottlieb wore a suit and sat in the corner, with a blue and white Israeli flag draped around his shoulders. Aharon Gottlieb is a Brazilian Jew who just moved to Israel — and as a Jewish person he is entitled to citizenship under the law of return.

“We need to make sure that our enemies don’t come into the country,” Gottlieb said.

That is a view held by many Israelis. Across the street from the court, Malka Weinstein sipped a cappuccino with friends.

“All the Western countries don’t let such people into their countries,” Weinstein said. “If you speak against this country, don’t enter there. Go somewhere you believe in, not a place that you think is bad,” Weinstein said.  “It’s not Israel that’s so racist or against, countries should defend themselves.” Classes at Hebrew University begin next week.

The program that Alqasem was accepted to is called, “Human Rights and Transitional Justice.” A political cartoon in the liberal Israeli newspaper Haaretz this week pictured Alqasem sitting in her detention cell. A guard is saying to her, “This is the practical part of the course.”