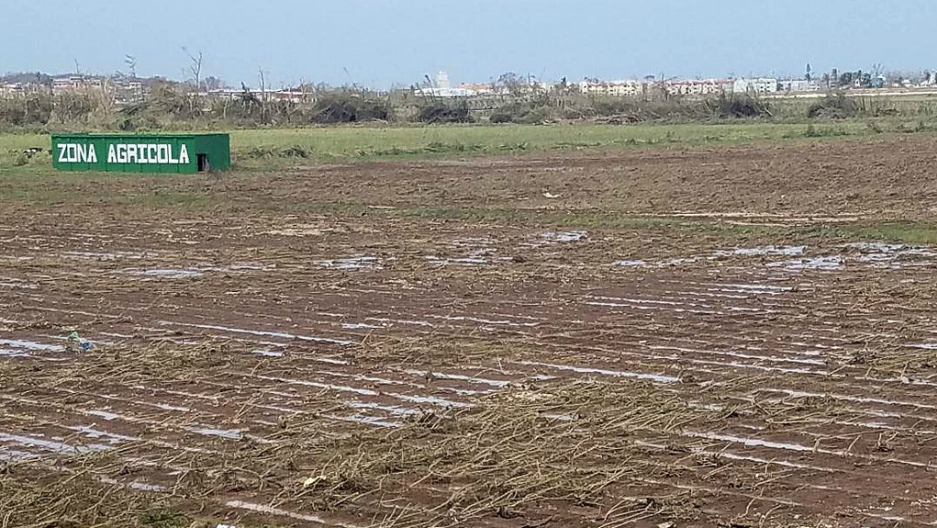 Courtesy of US Deparment of Agriculture

In Puerto Rico, volunteers and farmers are working together to rebuild after Hurricane Maria devastated Puerto Rico’s small agriculture sector.

Even before Hurricane Maria roared across the island, Puerto Rico imported roughly 85 percent of its food. After the storm, that number shot up to about 95 percent imported food — if you could get it. Road closures and shuttered grocery stores left many Puerto Ricans with no choice but to skip meals and live on canned and shelf-stable food for weeks and months.

Nine months after the storm, one of the only places to find locally grown food on the island was at farmers' markets like the one in Rincón, on Puerto Rico’s west coast.

Sonia Carlo, whose farm is slowly recovering from the storm, now brings pineapple, papaya, mushrooms, and kale to the market. Sonia says things are just starting to turn around for her family and the farm. They are finally harvesting again and her farm-to-table restaurant, Sana, opened a few weeks ago.

But Hurricane Maria devastated their lives and destroyed their home. Carlo had to send her three children to Florida to live with family while she and her husband lived in their car and rebuilt the battered farm.

“All of our production — years of tropical trees, like mango trees and passionfruit trees — died [or] were blown away,” Carlo says. “We had trees that were a hundred years old that totally perished. Since the hurricane was a cyclone, it brought some salt water and some sand with it. It looks like someone threw herbicide on everything in its path.”

Across the island, tall fruit trees were the most heavily damaged food crop. Underground root vegetables did okay. Ground plants like pineapples were among the first to recover and fast-growing vegetables like salad greens were also easy to restart. Visitors came to Puerto Rico after the hurricane with suitcases full of seeds to donate to farmers.

Carlo says they actually could have started growing again relatively quickly, but since they had no electricity and no gas, they couldn't operate the water pump to irrigate the farm. “It was just trying to scrape up anything,” Carlo says. “Waiting ten hours for gas, just to grow food. It was very uncertain.”

In Las Marías, an agricultural area known for growing oranges, farmers Domingo Antonio Romano and his wife Nilsa Romano went through a similar trauma. After the hurricane, Las Marías was cut off from the rest of the island for two months and relied on supplies airlifted in by helicopter.

Before the hurricane, Antonio and his wife mostly grew coffee, mango, and orange trees on their small farm — the very crops most impacted by the storm. They used to have 20 orange trees; now they have one.

“Ninety percent of our farm was destroyed, but it was really like 100 percent because with the hurricane no one could come here to harvest,” Antonio says.

Antonio says it would have been impossible for him to rebuild alone. But he’s not alone. Five volunteers from a grassroots, nonprofit group called El Departamento de la Comida (the Food Department) are here to camp out on the farm for a week to clear land, plant crops, fix fences and repair the roof, among other tasks.

The Food Department organizes groups of volunteers called brigades and dispatches them all over the island. As many as 20 people at a time descend on a farm for a week, bringing with them seeds, tools, building supplies and the collective strength to revive all aspects of a working farm.

Edan Freytes, the leader of the brigade on Antonio’s farm, says they do this work because farmers are critical to Puerto Rico's advancement. “Agriculture is the backbone of the country,” he says. “And it’s the most damaged sector. I think it’s the sector we need most to help, because it got the worst loss."

Nilsa Romano says she’s happy to have the volunteers here. The work they do in a week would have taken her and her husband months. But beyond the physical help, she is grateful for the emotional support and the encouragement the volunteers bring.

“It’s very emotional for me because I was very depressed. It was a very traumatic experience,” Nilsa Romano says. “For months, we were without water, electricity and a roof and we were alone. With this group here, I’m just so grateful.”

The Food Department has set a goal to send brigades like this to 200 farms across Puerto Rico, large and small, organic and commercial. They want to support domestic agriculture in any form.

Carlo, from the Rincón farmer’s market, says she had similar support, not from an organized group but from friends, neighbors, and strangers who volunteered their time to help her rebuild.

“What really got us through everything was the community,” she says. “We had a commitment to our community, especially in Rincón. People just said, ‘What do you need? I’ll help you. You need hands?’ And we said, ‘Yeah, we need people.’ And that gave us strength to keep growing and producing.”

“I'm working seven days a week, but I'm doing it with a smile on my face because I know it's for the good of everything,” she says. “I know this is my journey in life and this is what we're going to be doing. No matter how many hurricanes come, we’ll still bounce back. Nothing is going to keep me out. Not even a category five hurricane.”