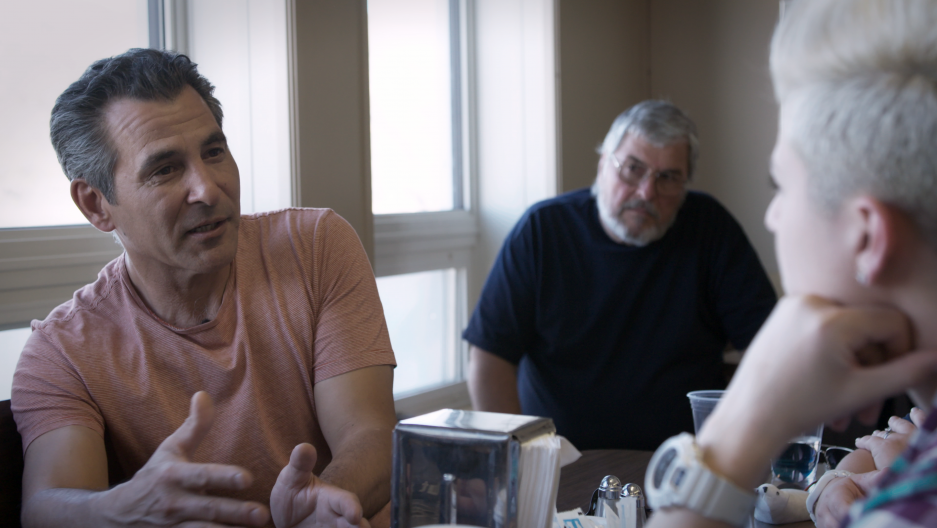 When you think of reality TV, the first thing that comes to mind is probably "Keeping Up with the Kardashians" or "The Bachelor" — showcases of excess. Well, in Canada there’s a new show that aims to take on issues bigger than shopping or failed romance.

It’s called "First Contact." Its goal is to challenge stereotypes about First Nations people by bringing six participants (and viewers) on a journey into real-life Indigenous communities across Canada. Some say the show's concept is offensive.

For those of you who watch reality television shows, the premise won't sound new. Take a group of people, put them in unfamiliar situations, watch their reactions and then wait for the redemption moment — when someone realizes they were wrong all along. That's the premise of the show.

The goal is to change minds. That's what the producers of the show and Aboriginal Peoples Television Network (APTN) hope for. The six people chosen for the show were screened through a national pool submitted online through the casting director. All of them said they wanted to travel the country and sought a space where they could feel comfortable sharing their views.

But some Indigenous people have had a visceral reaction after watching "First Contact," criticizing the show as "triggering" and "offensive" because of the blatant racism displayed.

“This is not made for Indigenous people, really," says Dr. Kim TallBear, who is Sisseton-Wahpeton Oyate in South Dakota and a descendent of the Cheyenne and Arapaho Tribes of Oklahoma. She is a regular contributor to a podcast called Media Indigena and teaches at the University of Alberta in Canada.

"And even in that show, Indigenous people are not really the main characters of the show. They're sort of the foils against which white people get to act out their racism. And that feels kind of exploitative."

A lot of people on Twitter agreed. Indigenous scholar Janice Makokis tweeted this:

Genocide denial is very real. Making indigenous people relive or justify the intergenerational genocide/ trauma we experienced is wrong. I don’t know if I can watch #firstcontact - it’s not our job to incur the emotional and intellectual labour/ burden to teach white people.

Stephanie Scott is one of the producers of "First Contact." She is part of an Indigenous media company called Indios Media. As a member of the Roseau River Anishinabe First Nation herself, she says while she understands the criticism surrounding the show, she's heard a lot of positive things from both Native and non-Native people.

“I completely understand it and we know that there was a triggering element," Scott says, "but we felt that we really had to begin a dialogue.

“We have to start somewhere. It's just a small step, and no matter what you do there is always going to be someone that has an issue with it. But generally, overwhelmingly, the response has been extremely positive.”

The concept of "First Contact" isn't new. Three years ago, the Australian network Special Broadcast Service aired the same show with the same concept. Indigenous people in Australia had a reaction similar to what the Canadians did. For her part, TallBear doesn't understand why this show aired at all. The show is currently not being broadcast in Australia; the first season of the Canadian show had three episodes, and there's a second season in the works.

APTN recognizes the shows controversial nature and submitted this response about the show's intent to The World via email:

Continuing to develop relevant and thought-provoking content that informs and educates the Canadian public, and that connects Indigenous and non-Indigenous Canadians is something that we endeavour to do daily as the world’s first independent national Indigenous broadcaster. First Contact provides a spectrum of viewpoints, including the expression of some controversial and emotionally charged beliefs and prejudices. While this may spark debate and controversy, we believe that the show is generating an important conversation that needs to happen and that this is one step on the path toward reconciliation. Misconceptions and stereotypes must be challenged, and First Contact does that. We wish to encourage everyone to voice their opinions and stories in a healthy and respectful conversation.

TallBear feels otherwise. "We don't feel that we need a refresher in white people's racism towards Indigenous people," she said. "They are trading on long-standing colonial tropes that most of us grew up with and that we find very hurtful to have to listen to."

TallBear says there is no excuse for non-Indigenous people to not be educated about this history. There are better ways to learn about contemporary Indigenous issues than watching a reality TV show.

Editors Note: This story has been updated. Kim TallBear is a contributor to the Media Indigena podcast.