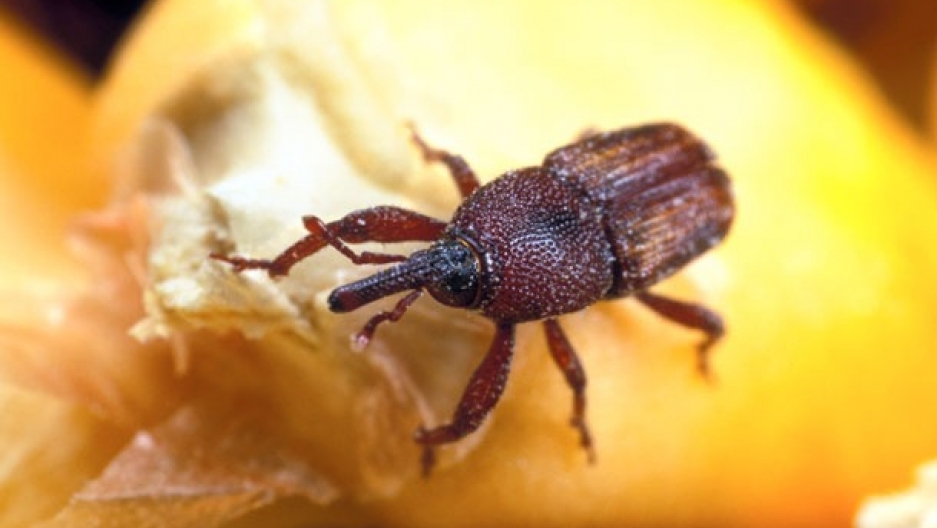 A study published in the journal Science found that crop loss to insects is likely to increase with rising global temperatures. Above, a maize weevil munches on an ear of corn.

US Department of Agriculture

A new study finds that global warming will bring with it an increase in agricultural pests, which will lead to significant crop loss across the globe.

Scientists have already raised grave concerns about the effects of climate disruption on global agriculture. Research has shown that rising temperatures can reduce nutrient quality in staple grains, and that droughts and flooding can reduce yields. The recent report adds an additional worry.

The new findings make “intuitive and scientific sense,” based on what scientists already know about insects, says Michelle Tigchelaar, a research associate at the University of Washington and a co-author of the study.

“This means that as the global temperature rises, their body temperatures rise, and so they will eat more. Essentially, their energy use goes up,” she says.

And as temperatures rise, more insects will survive through the winter and reproduce at faster rates.

Put those two things together and the result is a larger insect population that will need to eat more to survive.

The unique part of the study, Tigchelaar says, was that it was the first time scientists quantified how big these impacts could be.

“What's surprising about these results is that this is not an insignificant contribution to future crop losses,” she says. “It is not going to be the dominant factor of how climate impacts crops, but it is not insignificant and will definitely aggravate the problem.”

The insect boom will primarily affect the world’s main staple crops — corn, wheat and soy. Wheat will likely see the largest crop losses, Tigchelaar says, because it is grown in temperate climates, where the study predicts the largest rise in numbers of insects will occur.

To put a figure on it: Two degrees of global warming could double the volume of wheat that is currently lost to pests.

“Our projections show that those crop losses could be on the order of several hundred million tons,” Tigchelaar says. “Combined with the other impacts of climate change on food production, these impacts are tremendously important, especially for the more than four billion people on this planet who depend critically on staple crops for their sustenance. Households that spend the majority of their income on food will be extremely vulnerable to price shifts.”

The nations of the world can take some steps to prevent or at least mitigate these crop losses, the most obvious one being to limit climate change, Tigchelaar says. Farmers and farm policy specialists should also look into new pest management strategies, as well as investments in crops that are more resilient against heat and pests.

“Breeding strategies [will be] an important part of any solution to climate change, but they're not going to be able to get us there alone,” Tigchelaar says. “Crop scientists have been trying for several decades to breed crops with increased resistance to heat, with little to no avail. That means that farming practices and perhaps what we eat are going to have to change.”

The good news from the research is that “a lot of the projected impacts of climate change on agricultural crops are interconnected,” Tigchelaar says.

“Solving climate change, solving pest impacts and solving the food crises that we're facing here in the United States might have common solutions around better land management practices and better public health policies,” she says. “If this kind of work can galvanize those kind of changes, that would be a really positive impact.”