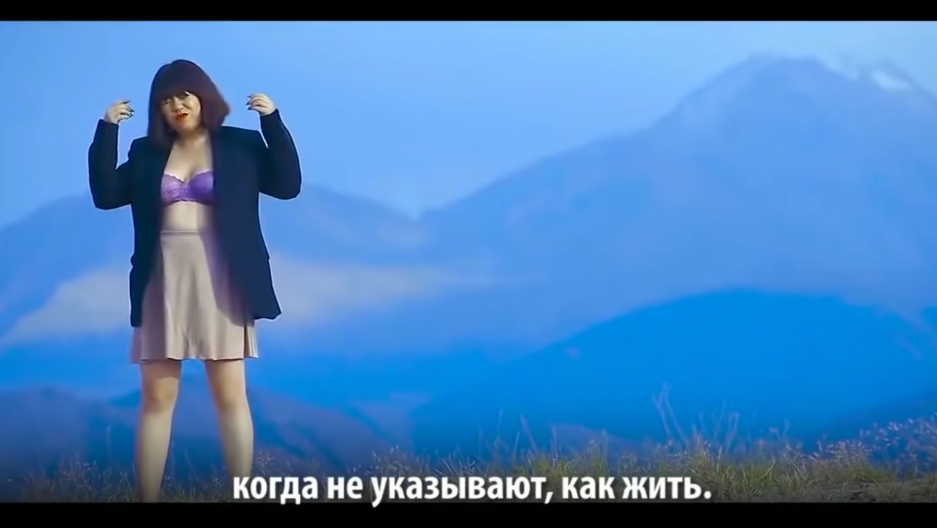 Zere Asylbek performs her song Kyz, “Girl” in Kyrgyz, in a music video on YouTube. She's been criticized for the clothing she's wearing and received death threats over the song.

Singer and student Zere Asylbek wrote a feminist song and produced a video that's provoked ire in many Kyrgyz. They're mad at the clothes she wears in the video — a lacy bra underneath a blazer — and mad about the lyrics, which advocate independence for women.

Bermet Talant, a Kyrgyz journalist who has been covering attitudes towards women in Kyrgyz for the past several years, translated the song in a story for Eurasianet.

I wish the time passed, I wish (a new) time came
When they wouldn’t preach to me how I should spend my life
When they wouldn’t tell me "Do like this," "Don’t do like that"
Why should I be like you want, or like the majority wants,
I am a person, and I have my freedom of speech.
Where is your respect for me?
I’ll respect you. You respect me.
You and I, together,
Hey, dear, join me,
We will create our freedom.

Talant reported that Asylbek received death threats over her clothing. “If you don’t remove the video and don’t apologize to the Kyrgyz people, we will kill you soon. This will be the first and the last time,” read one of the private messages. “I will gladly join and cut your head off,” read another.

The World interviewed Asylbek about her song and video.

The World: So your song is called Kyz, which means girl. What prompted you to write it?

Zere Asylbek: Well, the social problems, especially gender inequality and discrimination on gender basis made me write this kind of song.

And what message did you want to get out by singing it?

So are there official or informal dress codes in Kyrgyzstan for women?

No. Like maybe in workplaces but in fact everyone is free to look the way they want.

Women are free to wear whatever they want? It's a pretty conservative country, right?

Yeah, it is a conservative country but in terms of mentality. But in terms of law, it's like very democratic and people can wear whatever they want.

So if that's the case how could somebody be so upset by this video, by this song, that they would threaten to cut your head off?

Well, I can only guess that they felt some kind of, I don’t know, ashamed or … I don't know. They told me, a lot of comments said that I was violating the Kyrgyzish norms, let's say, and they said that Kyrgyz girls shouldn't be like this and it's some kind of a Western propaganda and stuff like that. So I think this was the cause.

Well, I am trying to get people into a huge conversation. Because, you know, I have worked on a lot of social projects because I'm an activist. So, those social projects they are staying in a kind of activist's underground and not reaching the public massively, so I wanted to do something that would reach the public massively. And I knew that I had to do something triggering and provocative because it's the only way to reach people massively, by making hype. So that is why I wanted to do it provocative because I want to get to get people speak about it a lot. And it doesn't matter if they speak negatively or positively. I just wanted to rise up the topic.

In the video though, you're standing surrounded by several young women in long black and white robes that jump in the water and emerge in different clothing. One wears a traditional dress and headscarf, one is in a bikini, another in a hijab, another in jeans with short blue hair. Do you worry that people in Kyrgyzstan miss the point?

I was expecting this and felt like I was sure that most of the people would miss the point because, like, the perception of people, I knew that it would be just from the visuals from my music video. So it's girls wearing inappropriate stuff and stuff like that. But I just really wanted to show the society what is the way most of Kyrgyzish people think and how it isn't right and how it has to change.

Have you changed your life or any of your habits because of these death threats?

Yes, I had to and I did. Now I cannot go out from my house without having somebody with me. And like walking with me everywhere I go and knowing where we go next and if everything is safe.

How does that make you feel?

It makes me feel really bad and because I am a person who is very used to freedom. But I hope that this will stop very soon and I will not have to walk around with somebody always. But I understand that it's important for me now because the death threats, they can be pretty serious.

How has your family reacted to your song and the video and the death threats?

They have reacted to my song really good. About the video, my parents actually they did not agree on me wearing that bra and nothing but a jacket. But they said, "You are a person, first of all, and you can do things that you want, if you feel that it's right and we will support you." So they support me. But their reaction to death threats, especially my mom, she's very worried about me. But still they understand that the topic is so huge that it's worth it.