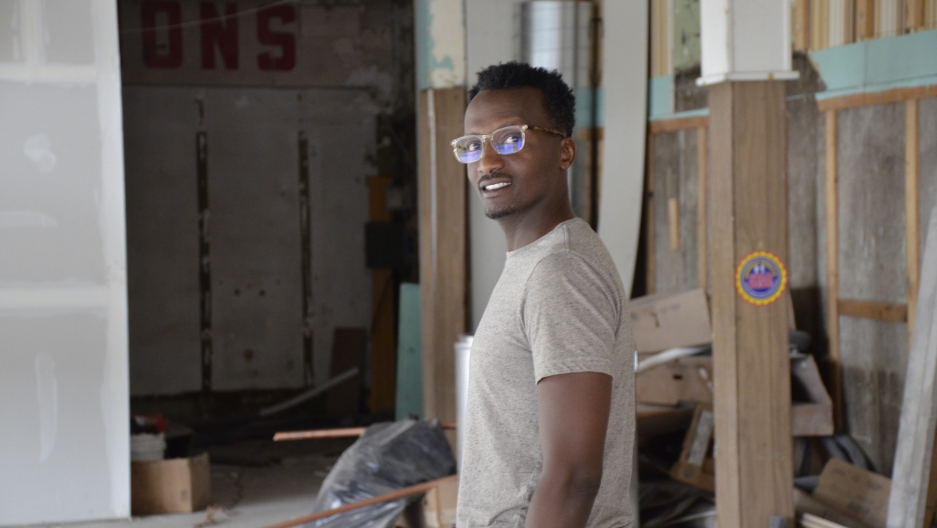 Hamissi Mamba walks through the guts of what will be his new restaurant, Baobab Fare in Detroit. Originally from Burundi, Mamba relocated to Michigan two years ago, learned English, and is now a budding entrepreneur.

Two years ago, Hamissi Mamba was living in Burundi. He came to Detroit as a refugee and joined his wife and young twin daughters who were already living in the US — moving to a new country, navigating a new culture, mastering a new language.

“I think that was a big challenge for me because I didn't even take a class. I’ve been watching cartoons with my girls,” Mamba says.

Nine years ago, Time Magazine ran a cover with a picture of urban American decay. “The Tragedy of Detroit: How a great city fell — and how it can rise again,” read the front cover. Today, there are many signs of a comeback in Detroit: new businesses, stores, less urban blight and more entrepreneurs giving it a go. Many private and public organizations, along with banks, are investing in the area’s recovery.

And like many Rust Belt cities, Detroit is trying to attract immigrants to help fuel that.

“This is a dream come true,” Mamba says, walking around the guts of his new space, currently under renovation. “This is going to be Baobab Fare, African restaurant.”

The restaurant will serve traditional African juices, coffee and food.

“Baobab is a tree, we find it in West Africa," Mamba says. "So, why baobab? Because we came here, the tree grew in the desert and then is healthy and is strong, so we say, ‘We are growing in Detroit.’”

But how does a refugee with no experience running a restaurant get started? It can be very difficult for newcomers in the US to get access to traditional lines of credit.

Mamba won a $50,000 competition sponsored by the group Hatch Detroit — a contest where residents vote for the type of retail they want in their community. Mamba and his wife organized a pop-up restaurant during the contest.

From there, Mamba got another $50,000 grant from Motor City Match, a private-public venture between the federal government, the city of Detroit and the nonprofit the Detroit Economic Growth Corporation. 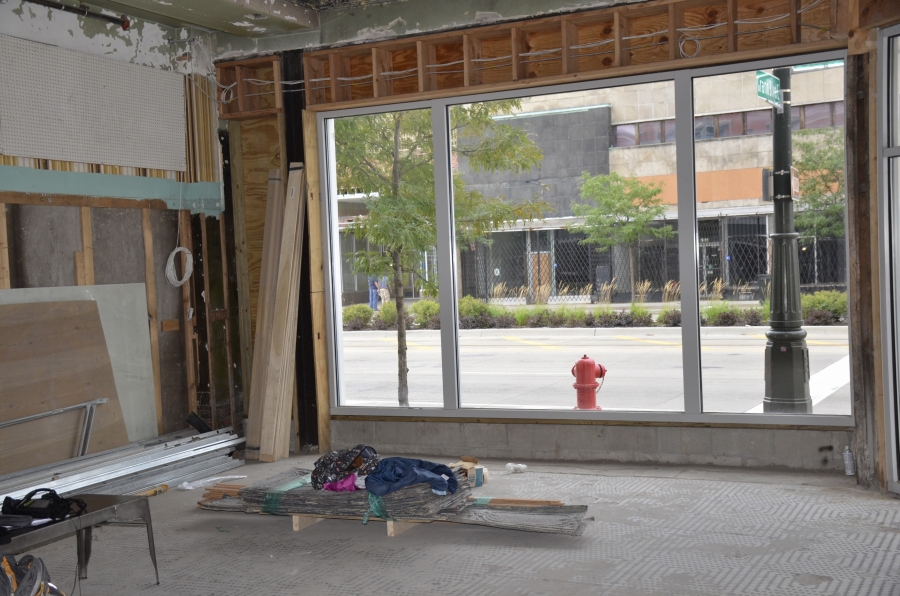 The view from inside Baobab Fare. The group Motor City Match is investing in several companies in the neighborhood to try and build density. These few blocks called “New Center” were once the corporate home to General Motors and an area of immense wealth.

“Right now, immigrants are the only growing source of population in the city of Detroit," says Steve Tobocman, the director of Global Detroit, a group partly funded by the Detroit Regional Chamber of Commerce and dedicated to helping revive derelict neighborhoods by making Detroit more attractive and welcoming for immigrants. "Michigan is the only state that lost population in the 2010 census.”

Michigan's population has since stabilized and has grown by roughly 80,000 since the 2010 Census, with foreign-born making up 6.4 percent of the state, about half the national average, but relatively high compared with other Midwestern states.

“They are a source of life and vibrancy, and they are creating jobs that help everyone in the community,” says Tobocman, speaking at an Indian restaurant in a neighborhood known as “Banglatown,” a community straddling the cities of Detroit and Hamtramck with a lot of South Asian residents. “[Immigrants] are providing retail services that make this community thrive, and providing a tax base. And frankly, occupancy to the vacant structures that are critical to retaining the African-American residents in the region so that this neighborhood doesn't fall the way that some of the more disinvested ones have.”

Karim initially moved to Queens, New York, but quickly relocated to Detroit after a friend suggested checking it out.

“I could have a job and the living cost is less than New York, so we survived easily here," he says. 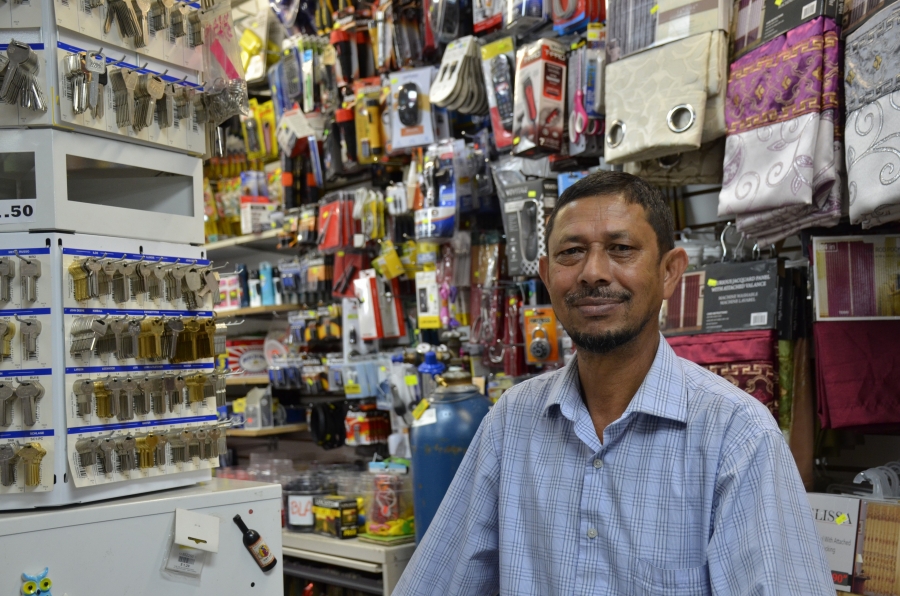 The new immigrant entrepreneurs pay taxes, both personal and property. And these business owners, like Karim, generate other economic activity.

“He needs somebody to wash his windows," Tobocman says. "He needs to hire the truck driver.”

The Detroit area has also attracted a lot of high-skilled immigrants. One quarter of southeast Michigan’s practicing physicians and half of the area’s engineering Ph.D.s are immigrants, according to research from Global Detroit. Many are lured to the area by automotive engineering jobs, and eventually, many job seekers become job creators — including people like Tel Ganesan, who is originally from India.

Ganesan is the founder of Kyyba, an information technology staffing firm with 600 employees in the US and 100 in India.

When the topic arises about recent shifts in the national mood toward immigrants in the US, Ganesan gets serious. He says he hasn’t experienced anything negative himself, but warns that we can’t become short-sighted.

“We have to first ask the question: 'What made America the greatest nation on planet Earth?'" Ganesan says. "Because we are a melting pot, because we brought the best of the best from all around the globe, and we put them all together. And that is our strength, that will always be America's strength. And if you try to take that recipe away, we will not be as innovative, we not be as disruptive. Look at all the major companies that are created by the immigrants.” 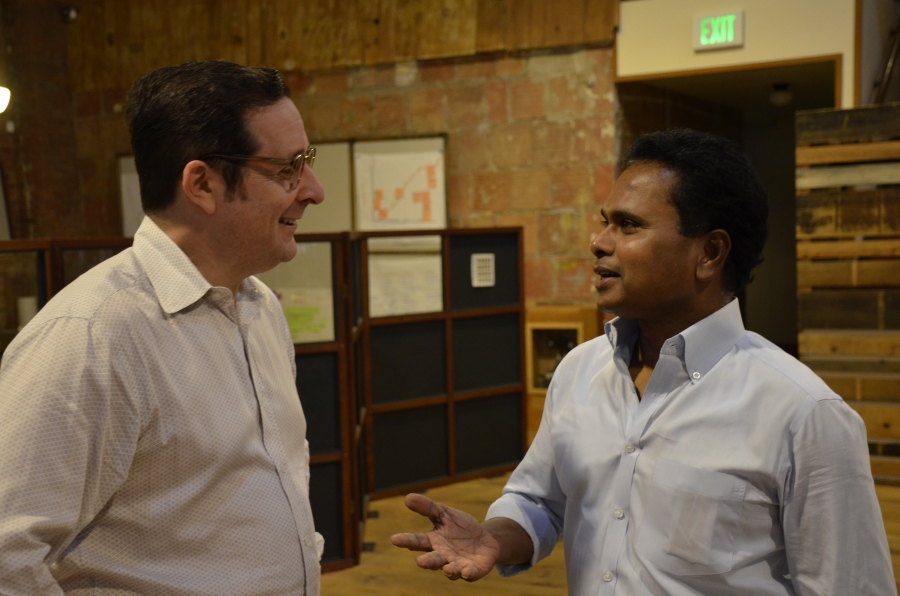 One of Ganesan’s spinoffs looks for ways to connect entrepreneurs from around Michigan, and he says he doesn’t care if the people he’s helping are from India, the US, or wherever.

“Entrepreneurship is agnostic to nationality. The only thing that it cares about is how good is the idea, and can we make this idea into a reality is the question we ask,” Ganesan says. "When you connect them, your ecosystem is powerful. It is almost like mimicking the Silicon Valley."

And remember, Detroit was the nation’s Silicon Valley a century ago, the technology capital of the world, driven — in part back then — by foreign-born workers. Detroit still has a long way to go in its comeback. But civic and business leaders have taken pains to get out the message: If people from across the globe can speed up the city’s revival, they’re most welcome.