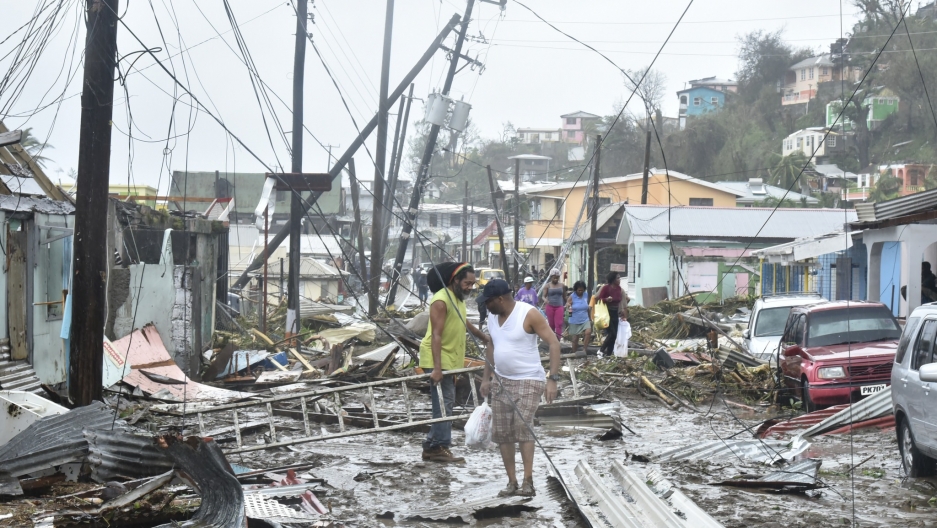 Residents in Puerto Rico begin to clean up in the aftermath of Hurricane Maria, which struck the island on Sept. 16, 2017.

When Hurricane Maria struck Puerto Rico, water utilities were shut down, making access to safe drinking water one of the most pressing issues across the island. So, a citizen science group in Rincón, Puerto Rico, rallied to help test drinking water sources.

Rincón, on the west coast of Puerto Rico, is a mecca for surfers and beachgoing tourists. The town has a quaint square with gourmet coffee shops and a farmers market.

After the hurricane, Rincón didn’t have reliable drinking water for several months. The incidence of waterborne disease increased greatly. There was a sharp rise in gastrointestinal issues, scabies and leptospirosis — a bacterial infection caused by fresh water contaminated with rat urine.

Steve Tomar, who has lived in Rincón for more than 40 years, was in a position to help. Tomar is vice chairman of the Rincón chapter of the Surfrider Foundation and director of the Blue Water Task Force, which tests ocean water quality near the beaches.

“Immediately after the storm, people were asking, ‘Can you do something about checking the wells and springs?’” he says. “We said, ‘Well, we’re not set up for it but, yeah, we can do this.’ Within three weeks after the hurricane, we [were] up and running, as opposed to the government agencies. It was like three months at the earliest before they started responding.”

Without a functioning central water authority and with all the stores having sold out of bottled water and soda, locals had to resort to natural water sources like springs, wells and streams. For the vast majority of the island, Tomar says, residents had to draw what water they could and hope for the best. No one had any idea if the water from these sources was safe.

Initially, the only tests Tomar had on hand were for enterococcus, a hardy bacteria that can survive in a marine environment. Once they were able to get the right supplies, they tested for other contaminants, including bacteria from fecal matter.

They began with a small stream in a park near downtown Rincón. “This literally was where everybody who lived in downtown Rincón had to come for their water,” he says. “This was the only source they had.”

The team quickly branched out to include much of the surrounding area. They also gave an expedited training course to Boy Scout groups and anyone else interested in learning how to do water quality testing. Within a few months, they tested most of the informal water sources within a six-hour radius. (After six hours, a sample can no longer be accurately tested.)

Tomar’s team put up color-coded signs — green, yellow and red — to notify people of their results. “Boil for a minute, boil for 5 minutes, and boil for 20 minutes,” Tomar explains. “Quite frankly, I wouldn’t be drinking it in the first place because if you’re finding that much bacteria, you’re probably also going to [find] a whole suite of other problems that [indicate] you wouldn’t want to use this for potable water.”

One year later, Tomar still repeats sampling every few weeks to monitor bacteria counts. On site, volunteers can test for temperature, nitrates, chlorine, sediments and other contaminants. They have to take samples back to the lab in the Surfrider office to test for the things that can really make people sick, including coliform, enterococcus bacteria and E. coli.

Tomar says he was reluctant to take on testing of drinking water in the past because he feared stepping on the toes of government agencies and the public health services. After the hurricane, this was no longer an issue. “And, of course, you do it, because this is the community,” he adds. “These are your people, so whatever you can do to keep them healthy and informed, you do it.”

Surfrider’s Blue Water Task Force is the largest citizen science program in Puerto Rico. Tomar says it was relatively easy to transition the skills volunteers developed for testing ocean water into testing drinking water. He sees value in that beyond water safety.

“In a lot of ways, I think the major benefit of these community-based science programs is developing skill sets in the community,” he says. “An educated populace is, of course, a populace that’s better able to take care of their own resources.”