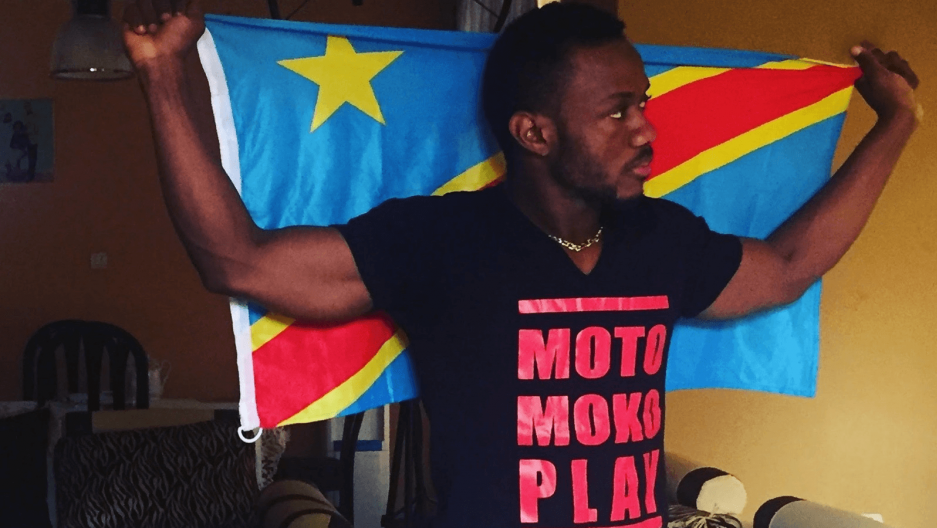 Congolese rapper Bob Elvis' music is often provocative — so much so that it may have led to his kidnapping.

Every Sunday, Bob Elvis makes his way through the notorious Kinshasa traffic to a nondescript recording studio on the outskirts of town.

“This is my ghetto,” the 29-year-old rapper says fondly, looking out over the chaotic street scene outside his studio. Women sell cassava leaves and chat with each other on one corner. Children laugh as they play in the side streets, while pedestrians and street vendors somehow manage to weave their way through the bumper-to-bumper yellow-painted taxi vans overflowing with passengers that line Kinshasa’s streets at all hours of the day.

“I love this space because it is a space for everyone,” Elvis says, smiling. Inside the small building there is a professional lighting studio where aspiring photographers can learn to take photos, as well as a music space where local musicians like Elvis can record their tracks.

Related: Tracing conflict gold in the Democratic Republic of the Congo

It is clear from the start that Bob Elvis is not and does not aspire to be a “bling bling” style rapper, as he calls the likes of commercial hip-hop artists like Jay-Z or Drake. He is an activist who raps, using lyrics and symbols to engage his listeners in a conversation about what it means to be a Congolese citizen, right here and right now. Some of his songs are about growing up in Kisangani, where he witnessed the violent six-day war between the Rwandan and Ugandan forces at a young age. One of his more recent songs is a tribute to Rossy Mukendi, a pro-democracy activist who was killed by the police during a non-violent demonstration earlier this year.

“I want to be like Picasso was during his time — deeply politically engaged but also artistic and emotional,” he says, describing his style. Even his pseudonym, “Bob Elvis,” is rooted in his desire to blend the rallying cries of Bob Dylan with the raw sensuality of Elvis Presley.

“But as I became more political, more people have stopped associating with me,” he continues, elaborating on the consequences of his choices. “They say that I’m dangerous — that I’m bad for their family or their business. They do not see the point of being politically engaged in the world around them.”

His latest single, “Dégage,” or “Get Out,” is his most provocative — and potentially dangerous — song yet. Explicitly directed towards President Joseph Kabila, the Congolese leader who has held office for seventeen years and is the object of the rising pro-democracy movement across the country, the music video recreates an anti-Kabila demonstration from last year in which Kabila’s security forces killed six activists in the streets. Over the gruesome scene, the viewer hears the voice of Archbishop Cardinal Monsengwo — one of the most outspoken figures in the opposition — rising, saying: “It is time for all of our mediocre [leaders] to leave.”

Elvis acts as though his studio is a safe space where he can speak and rhyme freely, but freedom of expression is getting increasingly difficult as the December elections approach. Even though President Kabila is not running for a third term, he has appointed close associates to run the major government institutions — such as the security and judiciary branches — ensuring that, even though he may not be president of the Democratic Republic of Congo, he will remain in power. This means that security forces are still violently cracking down on peaceful protests and targeting and detaining opposition activists. Many have warned Bob Elvis that he could be next.

“I am not a stranger to this kind of life,” Elvis says, laughing nervously. Recently he has alternated between homes in order to throw off anyone who could be tracking him. Part of why he comes to the studio on Sundays is due to the lack of security forces in the streets.

“I know it could be my best friend that sells me out to the authorities,” he continues. “I know that at the end of the day, I can’t trust anyone.”

Just a few days later, Bob Elvis was on his way to meet with his producer about his upcoming album release — called “Anti-Mediocrité,” a reference to the corrupt leadership that keeps Congolese citizens living in mediocrity and an extension of the archbishop’s politically charged message in “Dégage” — when he was kidnapped off the street.

“He was supposed to come to my house that Wednesday evening,” said his producer, who wishes to remain anonymous given the sensitivity of the situation. “He never arrived. The next day, I went to his house, and he wasn’t there, either.”

After an extensive search and rescue effort by the United Nations Organization Stabilization Mission in Democratic Republic of the Congo (known by its French acronym, MONUSCO), Elvis was found and rescued. However, many pro-democracy activists — particularly ones who do not have the notoriety and fan-following that Bob Elvis has — are often not as lucky.

“Some simply get killed. Others are held in prisons or incommunicado detention for years,” said Amnesty International DRC researcher Jean-Mobert Senga, describing the typical fate of a pro-democracy activist who is abducted by the security forces.

“If there is no one speaking up about your case, then you simply get lost,” he continues. Last year, two members of the Union for Democracy and Social Progress (UDPS) were arrested and are still being held in incommunicado. Five high-profile members of the pro-democracy movement Filimbi are currently being held at the Malaka prison in Kinshasa — and were there for five months before they were even allowed to see a judge.

“Just last week, there was a protest across the country by LUCHA activists,” Senga continued, describing the most recent crackdown on pro-democracy groups. “We counted 89 activists arrested that day, many of them injured by the security forces. Some of them are still in the hospital as we speak.”

Even though President Kabila has promised to step down, those who are fighting for democracy know that his power extends far beyond the presidency. For those who want him—and the circle of friends he has cherry-picked to lead the country — to dégage, the crackdown continues.

Reporting for this story was supported by the International Women's Media Foundation.