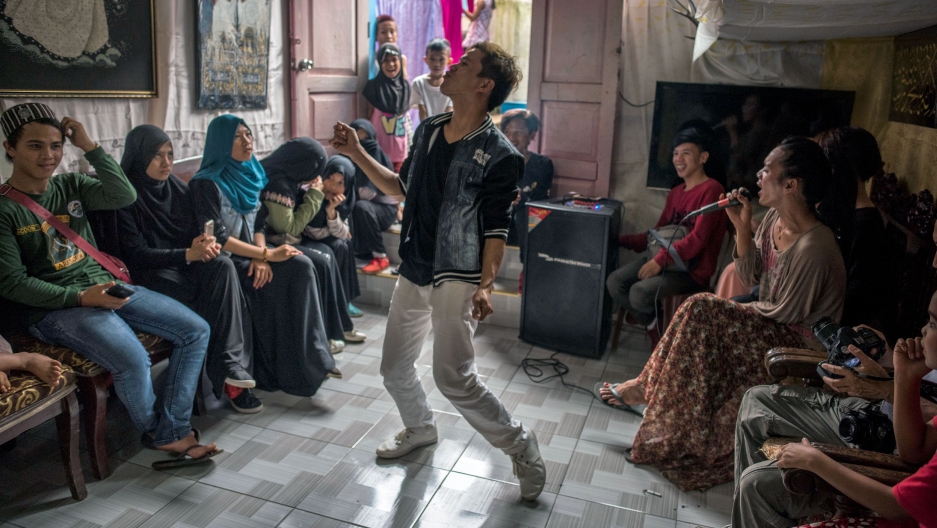 Nassif Malang and friends dance inside their house on Oct. 21, 2017 in Saguiaran, southern Philippines. Nassif began taking in gay and transgender evacuees in his house when the residents of Marawi started evacuating the city when pro-ISIS fighters invaded.

Tanya’s Salon was one of the oldest and most popular salons in Marawi City, in the southern Philippine island of Mindanao. Patrons considered it a place of beautification and pampering while LGBTQ community members saw it as a place of sanctuary — and survival.

As the city struggles to recover from the Marawi siege, a five-month occupation by a pro-ISIS group that killed civilians and destroyed homes, many in the LGBTQ community say the city is now too dangerous a place for them.

“I will never go back to Marawi,” said Anna, a 25-year-old transgender woman, shaking her head. Anna, who used to work at Tanya’s Salon, asked that her full name not be used for safety reasons. Many of those interviewed for this story did not want their full names used for fear of reprisal.

Marawi City was a difficult place to grow up as a gay, questioning or transitioning person, Anna says. The Islamic City of Marawi is one of the few places in the predominantly Catholic country where men wear skullcaps and women wear either a hijab or niqab; mosques outnumber churches; and alcohol and pork — a staple in many Filipino dishes — are not openly sold.

A peace deal that could forbid homosexuality

The new law allows for the establishment of a regional government and judicial system, greater fiscal autonomy, and is seen to bring peace to a region that has been plagued by more than four decades of armed conflict. It will also allow for the implementation of Sharia law in the areas covered by the new Bangsamoro territory, causing more tension in the already-fearful LGBTQ community.

But the LBGTQ community has long been the target of extremists and saw the region’s rising conservatism well before pro-ISIS forces invaded the city. 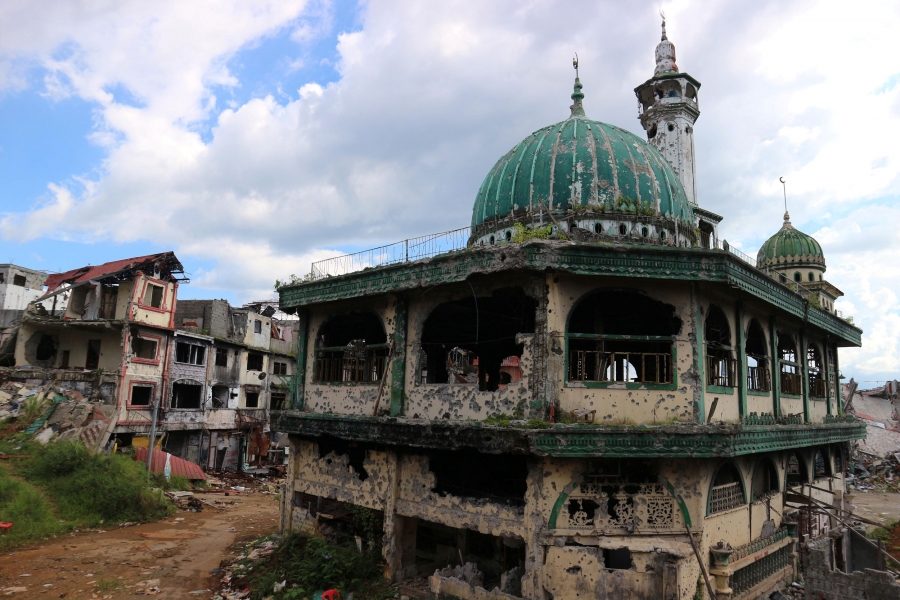 A bullet-riddled mosque is seen in Marawi, southern Philippines, one year after the city was invaded by pro-ISIS fighters.

A safe space in Tanya’s Salon

The LGBTQ community in Marawi struggled for acceptance in the conservative environment. They reported derision and abuse at home and discrimination at school. Others told stories of rape and molestation by relatives like uncles and older male cousins in an effort to “correct” them.

But in beauty salons like Tanya’s, they found work, friendship and protection.

That changed one day in 2012, when bearded men came in and casually handed the salon employees a letter saying that “all gays” should leave Marawi or be killed. One of them told Tanya to cut her long hair. Anna remembers Tanya defiantly laughing off the threat and telling off the bearded man: “My parents don’t tell me what to do. What makes you think you can?”

Anna did not see the gun until it was too late. Her shoulder-length hair, covering part of her face, blocked her view. When she looked up, a bullet went through the side of her left cheek.

When it was over, Tanya’s beauty salon was covered in blood.

Anna miraculously survived the attack. If she had not looked up when she did, the bullet would have hit her temple. Mayora survived, too. Tanya did not.

Tanya’s death sent out tremors of fear in the LGBTQ community.

Benjie, a 27-year-old who identifies as a gay man, was one of the salon employees who survived the attack by hiding in the bathroom. He said that he never thought about reporting the attack to the authorities.

“By then, we were so used to the threats already. Besides, even if we complain, we know that we would be dismissed. We would just be blamed for being gay.”

There are no existing statistics on the number of LGBTQ people killed in Marawi. A 2013 report by Outrage Magazine, an online LGBTQ news portal, mentions the attack on Tanya’s Salon and attempted to document the killings, but many incidents have gone unreported.

“I was angry,” said Trixie, an 18-year-old who identifies as transgender and is also a former employee of Tanya’s Salon.

“Mama Tanya was like a mother to us. If they could kill Tanya — one of the most known and influential in the community — what will happen to us now?”

Trixie herself survived an attempt on her life in February 2017, just a few months before the siege began.

Someone posing as a customer looking to hire her for her makeup services proposed a meetup. When she came out to the street corner to hail a motorized rickshaw known as a “tricycle,” two men on motorbikes took aim at her and shot her. Trixie ran and tripped on a rock, which she says saved her. The bullet missed, just barely. It went through her right elbow, she said, pulling back the sleeve of her hoodie to reveal a round, keloid scar.

In addition to Tanya, Trixie says that there are others who have been killed: Kuka around 2010; Ginny and Jazz in 2011; Janes in 2013; Mai-Mai in 2014; and just last year, Katrina, while shopping in a public market.

Agakhan Shariff, a known Muslim leader, told PRI he has heard warnings telling gays to leave Marawi or be killed broadcasted on two-way radio, a common means of communication for the townsfolk.

Macrina Morados, dean of the University of the Philippines Islamic Center in Manila, also confirms that she has heard many similar stories about LGBTQ community members in Marawi being targeted. She believes them to be true even if they are not openly talked about because “that would bring shame to the family.”

The attackers' identities remain unclear. Some blame relatives or citizens who have taken it upon themselves to conduct moral policing, something Morados likened to “honor killings.”

The killings seem to be based on a very narrow interpretation of the Quran.

“The perpetrators may claim to be Islamic scholars who are out to establish a pure Islamic State,” Morados said. “They interpret Quranic verses that say that there are only two sexes: male and female. Anything outside of that is a deviation from the norm.”

“The problem here is that we forget to look at the other Quranic verses that highlight understanding, tolerance and compassion."

Morados, who also studies gender, says that she herself is torn between progressive gender values and Islamic tradition.

“I am trying to be in the middle,” she said.

Activists warn that the criminalization of the LGBTQ community is part of a wider trend that is spreading across traditionally moderate Muslim communities in Southeast Asia. In January this year, salons in Aceh, Indonesia, were raided and 12 transgender beauticians were arrested, their long hair cut off.

In Malaysia, the government reportedly plans to launch conversion therapy programs for trans women. Earlier this month, two women were sentenced to caning for lesbian sex, prompting an outcry from human rights groups. 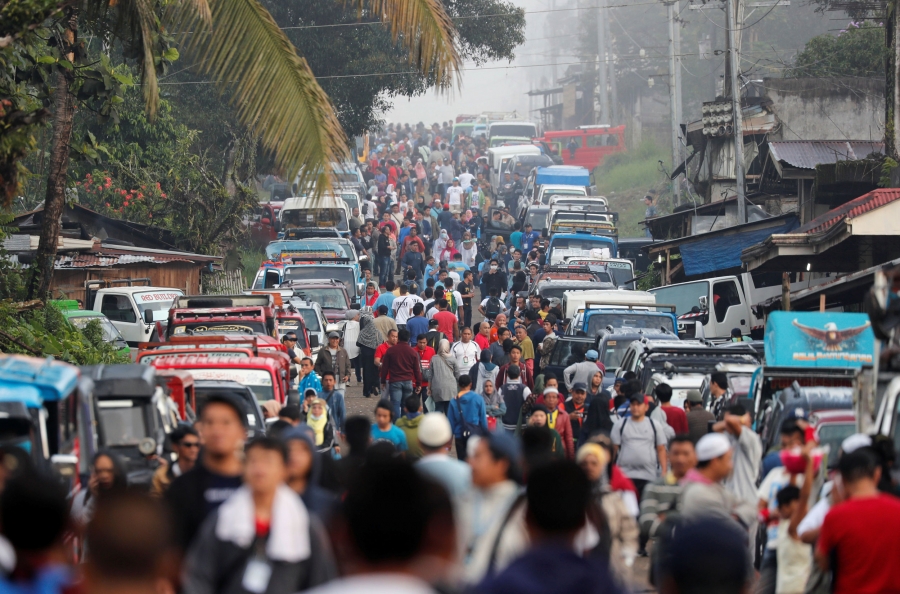 Residents wait in queue at a military checkpoint before they were allowed to return to their homes for the first time since the battle between government troops and Islamic State fighters began in May last year, in the Islamic city of Marawi, southern Philippines, on April 19, 2018.

Another warning: leave or be killed

On May 23, 2017, pro-ISIS fighters took over Marawi City, confirming the rise of religious extremism in the Philippines — something that Marawi’s LGBTQ community had known and felt even before the siege. Residents fled the city to escape the fighting. More than 200,000 people were displaced during the five months that it took government forces to regain control of the city.

Days before the siege, warnings were served. AJ, a 27-year-old who identifies as a trans woman, remembers getting a white envelope with a typewritten note saying that gays must leave Marawi or be killed.

AJ, Tweetie and the others felt cornered. Many of their families had shunned them; experience showed that the police and local government would not help them. Many family members, ashamed of a child who identified as homosexual or transgender, had already disowned them.

But the LGBTQ community who had long been hiding in plain sight did not expect that the months of displacement brought by the siege would also bring them together.

In the displacement camps they called home during the siege, they were subject to taunts and innuendo. Others said that the LGBT community’s “immoral ways” was to blame for the siege, both Tweetie and AJ said. It was also in the displacement camps where the LGBT community members, used to concealing their identity in Marawi, found each other while lining up for relief goods. One of them had a relative’s house in Saguiran, just outside of Marawi, with a spare room, where, in place of a salon, they found another safe place and bonded. Here, they would have what can only be described as slumber parties. They would do each other’s hair and makeup, hold pretend beauty pageants and sing karaoke.

The siege officially ended on Oct. 23, 2017. Thousands who lost their homes remain displaced but many have slowly started moving back home to Marawi.

The siege may be over but the LGBTQ community says that the fight for their lives is not.

“There is a lot of hopelessness among the community. There needs to be counseling because of the trauma they experienced during the siege and from the oppression they faced even before that,” said Ryan Silverio, regional coordinator of the ASEAN SOGIE Caucus, an advocacy group that promotes human and gender rights for LGBTQ minorities.

It is unclear how Sharia law will be implemented after the July passage of the law and the creation of the new regional government.

“There is no happiness for us in Marawi. You don’t know when they will come for us.”

For many others, including Anna, the only other choice is to run away and look for another place of refuge.

After the attack on Tanya’s Salon, Anna left Marawi and found a job in another salon in the Philippine capital of Manila.

Anna’s mother came to visit her during the siege and begged her to return to Marawi. Life had become even harder during the fighting and they badly needed her help supporting her other brothers and sisters. Anna refused. The memory of the attack on Tanya’s Salon and having been shot haven't left her.

“I will never go back to Marawi," she said.