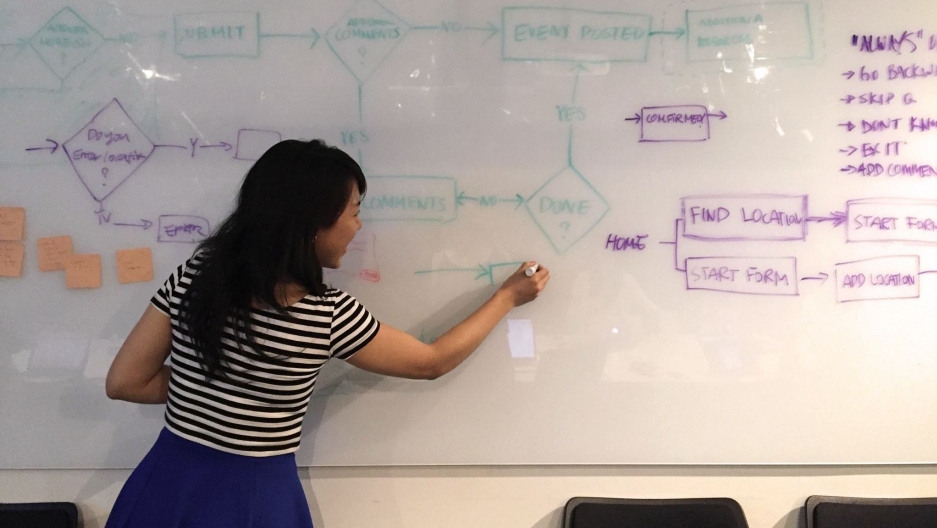 Alice Chang, AnnieCannons volunteer, draws a user flow on the board.

When Catie Hart first met the man who would become her trafficker outside of a nightclub in San Francisco, she was impressed by his mature, professorial appearance. Hart, then 18, had just moved from Colorado, expecting to attend college the next fall, but her encounter with that man — whom she declined to name — would dramatically derail those plans.

“I just moved here all the way from Colorado all by myself, and I didn't realize at the time, of course, but in his mind he was just like, ‘cha-ching.’” She says that her trafficker intended to groom her for sex work from the start, and before she knew it, that’s exactly what she was doing.

Hart says that the line between boyfriend and trafficker was always blurred, intentionally, so that she cannot even pinpoint any specific time when it became a coercive relationship. But she’s sure about one thing: After a certain point, leaving was not an option. She says that in addition to psychological manipulation, her trafficker would use threats of violence to keep her from running away.

“For so long, it was, ‘I will kill you if you ever leave me’ … almost every single day, and he would explain very calmly who he would pay, how much it would cost, how they would follow me for months and months and get to know my schedule so that when it happened it would look very random and they wouldn’t be able to pin it back on him. And he would say these things so calmly,” she recalls.

Twenty years later, Hart says that as both a survivor and more recently as someone providing training to social workers working with victims, sex trafficking has in many ways defined her life until now — and she is ready to move on. She’s finally found a way to do that through an Oakland-based nonprofit organization called AnnieCannons, which she learned about at a workshop they gave in the area. Their mission is to teach sex trafficking survivors how to develop software and websites.

Jessica Hubley, one of the organization’s founders, wanted to teach survivors something that was actually viable in the job market — and in the Bay Area, where she is based, nothing made more sense than software development. The Stanford University law graduate says she specifically wanted to work with trafficking survivors because “I hate when smart people are denied the opportunity to innovate because of bias or the circumstances of their birth. Human trafficking survivors are the most severe example of this.”

Her focus on the need for economic security was reinforced by interviews with trafficking survivors during a 2013 trip to Myanmar with AnnieCannons co-founder Laura Hackney, who was Stanford University’s senior research associate for the school’s Anti-Trafficking Project in the Mekong Sub-Region.

AnnieCannons, named for a female astronomer, would not just train survivors — they’d help women monetize those skills by teaching them how to navigate the industry and find work. That meant “Giving them a network among each other, connections in government, connections in the social sector, connections in the business world, that they can then leverage to do whatever they want to do,” says Hubley.

She recalls that “The business side of it that was sort of the eureka [moment]. ... We have this huge pool of untapped talent in this very profitable skill, and we have all of this demand for this very profitable skill and the only reason that they’re not going together is because of these biases that people hold that are stupid. And we don't have them, so like, why not put them together?”

AnnieCannons effectively acts as both a coding camp and a job agency. They hold their six-month courses at the Alameda County Family Justice Center, where this summer Hart and four other students have been learning HTML, CSS and JavaScript. The curriculum is split into two core phases: digital literacy and then front-end web development. There is a third optional phase, lasting indefinitely, in which students can choose to attend supplementary workshops and gain additional skills.

From Hubley’s perspective, financial security is the core issue: As long as sex work remains the best way to make a living, many will continue to do it even when they no longer have to. The stigma and trauma of a survivor’s past, along with the arrest record that many have, can preclude them from finding well-paid work, like in the tech industry. Before she decided to attend University of California, Berkeley — and eventually become an educator — Hart continued working in a strip club for two years to make a living.

“Even though I have my degree and stuff, I’m not necessarily someone who should go applying to jobs on Indeed.com because all you need to do is Google me and see I have this past, and HR and big corporations don’t like that stuff,” says Hart, adding that oftentimes, when it came to jobs, “I still felt that same feeling like when I was doing sex work, where, like, I didn’t feel like I had other options.”

Hubley wanted her organization to break this cycle by offering women another economically viable alternative, without the judgment sex workers often get from prospective employers. This is why AnnieCannons places so much emphasis not just on the training program, but also on networking and job placement, so that their students do not have to navigate the industry on their own.

“It’s not just that we find work and then we leave it to our graduates to do all the accounting and the contract and the client management logistics; we actually do all of that for them. So that the only thing they have to do to make money is be good at software engineering,” says Hubley.

AnnieCannons, which Hubley and Hackney founded in 2013, partners with local organizations and shelters who screen their clients for potential candidates for the program. Hubley says their students “range from having been born into slavery, like have no memory of not being in their trafficking situation before they got away, all the way up to having a ... college or graduate degree prior to having a romantic partner exploit them.”

The pool of candidates referred to AnnieCannons before the start of each semester is screened through a four-part interview-and-testing process. Hubley says between 55 percent and 75 percent of applicants pass. The test includes reading comprehension, a custom-designed, timed, color block test, reaction-time test, and a logic game that simulates the process of programming a robot. Those that pass the screening and attend the two orientation sessions are invited to the training course.

So far, 30 students have finished the core curriculum, not including the five who are currently studying. Carla Dartis, coordinator for the Human Exploitation and Trafficking Institute at the Alameda County District Attorney’s Office, praises the work AnnieCannons does, but says the volume of students is a small fraction of the trafficking victims in the county. There are no official statistics for Alameda County, but figures released by the National Human Trafficking Hotline indicate there were 6,083 cases of sex trafficking reported in the United States last year. Dartis cautions that these numbers do not reflect the full scope of the problem because the majority of cases are never reported.

Trafficking, she says, is up, as “the internet and the different applications have enabled the selling of oneself and the selling at the hands of others to grow exponentially.”

She went on to say that organizations like AnnieCannons are limited by the fact that their prospective students need to have some measure of stability in terms of food, shelter and schedule. Without that stability, many survivors are not able to even start, let alone complete, the program.

“Your odds are just highly against you, which is the other reason why your numbers are so small that access a program and that can get out of a program. Because just the nature of human trafficking says, ‘I am not targeting, I am not targeting that upper-middle class. … I’m really targeting those that are poor.’”

So far, three of eight students have already had to drop out of the current class. “The most critical service that no one has enough of is housing,” says Dartis. On top of that, many women who have been trafficked would not choose to identify as trafficking survivors because of the shame and stigma involved — and therefore wouldn’t be taking advantage of organizations specifically for trafficking survivors.

"Who has access to it? Exactly. Especially because even this cohort, this is only five of ‘us’ and realistically only three of us are really gonna make it through. There are so many trafficking survivors who meet the criteria of being stably housed and being driven and being logical in their thinking and there’s only five people there," says Hart.

AnnieCannons does not ever ask women specifically about their history of trafficking — they just take the referrals from their case workers. The class curriculum itself does not have anything to do with sex trafficking, or require the women to take about their past. It’s strictly for software and web design, and Hart says she prefers it that way.

If there’s any conversation about their past, it happens outside of class, according to Hart. “It’s something that seems to be happening a little bit more organically as we’re getting to know each other, and it’s not something we really talk about during class time,” she says. “They don’t promise to solve all that stuff, which I think is great.”

As she’s nearing the end of phase two of training, Hart says she regularly has to pinch herself, because the prospect of earning a full-time, stable living through coding seems too good to be true. Having already completed the first phase, Hart is eligible to take on database management and cleanup work for $20 per hour. “I’ve never been happier ... having a steady paycheck for the first time since I was like 16 and just like actual real financial security where I know I’m going to get paid every two weeks, and I can start to like just settle into my life, finally.”

“I’m so excited for the future for the first time in 20 years,” says Hart.