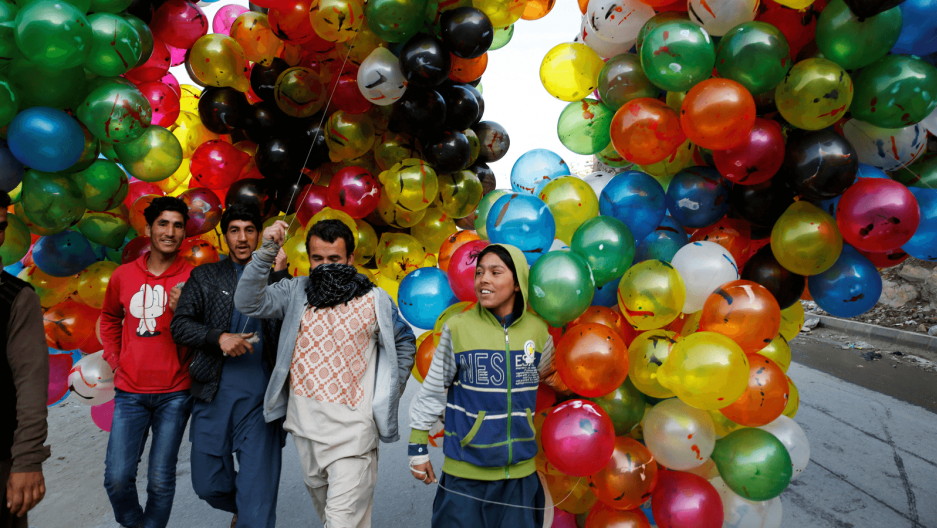 Watching helium gas lift balloons into the air is a lot of fun — or perhaps a tragedy if that balloon belonged to a small child who let it go. And who hasn’t sipped the helium gas from a balloon and then quacked like Donald Duck? Although that’s not the smartest thing to do since helium can displace the air in our lungs or cause other problems with respiration.

Aside from balloons and making our voice squeaky, what use is helium? Should we care whether or not we run out of the gaseous stuff? Helium is a gas. It probably is not very surprising to hear that helium and human beings have almost nothing in common, but we still need each other. Our 21st century economies depend on helium, and helium needs us to figure out better conservation strategies lest we run out of the stuff.

A noble gas, helium was first discovered 150 years ago, on August 18, 1868, by the French astronomer Jules Janssen, during a total solar eclipse. He named helium after the source of the discovery, the sun, or helios, since, at the time, no helium had been detected on Earth. There have been innumerable scientific advances made around helium since then; modern analytical tools used in disciplines from medicine to astrophysics, not to mention the cell phones we carry around with us, would not be possible without helium that is used in the manufacturing process.

I am a research scientist working at Colorado State University — at the foot of the Rocky Mountains and home to the Rams — who depends on plentiful supplies of affordable helium for the research I do. Thanks to helium, my colleagues and I, and our counterparts worldwide, are making scientific discoveries that enrich our global community — all dependent on the unique physical properties provided by helium.

Helium supply on Earth is finite

You may recall a few years ago when reports of a helium shortage surfaced, as well as periodic reports, including some this year, of constraints in the global supply. So is this a crisis worthy of national attention?

Helium has been hanging around since the very beginning and formed shortly after the Big Bang many billions of years ago. It is the second-lightest and also the second-most common element in the universe, after hydrogen gas.

There isn’t much helium on planet Earth, however; just a few parts per million. The problem is that the helium nucleus is so light that our Earth’s gravity cannot hold it. Once helium enters our atmosphere, it escapes into the vacuum of space, lost from Earth, swept along with the solar wind.

Despite this continuous loss of helium from Earth, reserves of helium have been fairly plentiful until recently. Most of the helium reserves we have on Earth were formed in a different way to its origins in the Big Bang. Radioactive elements, such as uranium and thorium, decay into smaller pieces or particles including very small alpha particles. These particles are helium atoms stripped of their electrons, bare naked, energetic and highly charged. We call this decay of radioactive elements fission, since the element splits into new daughter components and energy is released.

Decay of these radioactive elements replenishes helium that is lost to the atmosphere. It is trapped in various minerals and collects in large naturally formed gas reservoirs from which it is mined, such as the National Helium Reserve in Texas. However, this natural process takes thousands of years to generate quantities of helium that are worth extracting commercially.

Why we need helium

With a nuclear mass of just four — two protons and two neutrons — helium is a very stable element. Some of helium’s most vital properties for our purposes is that it is chemically inert and nonreactive, it is nonflammable, nonpoisonous and, most importantly, it boils at 4.2 Kelvin, or minus 268 degrees Celsius, which is near absolute zero, the lowest temperature possible in the universe. No other element can remain a liquid at these temperatures. There is simply no other material with helium’s unique properties available to us at this time.

For many industrial applications, there is no substitute for relatively inexpensive helium. It is vital in aerospace and defense technologies, high-tech manufacturing, rocket engine testing, welding, commercial diving, magnets in particle accelerators, the production of fiber optic cables and semiconductor chips found in your cell phone.

However, it turns out that the single biggest use of helium is to support our medical imaging industry, specifically magnetic resonance imaging or MRI, and high-end material analytics that take advantage of very high magnetic fields to make the nuclear magnetic resonance, or NMR, spectroscopy measurements. Those fields would not be possible to generate without liquid helium’s ultra-low boiling point.

The key to the MRI and NMR devices, which are used to image the human body, is the use of superconducting materials that are stable at 4.2 K. Most materials resist the flow of electrons, or current, through them and this turns out to be a problem for magnet construction. Every single electronic device we use, every single wire feeding current to wall outlets, and all the infrastructure used to transport electrical energy through the grid waste energy through resistive forces. This resistance makes it difficult to generate a large magnetic field with high electrical currents required. A superconductor is magical, almost, and has no resistance to the flow of electrons and has the capacity to generate an enormous magnetic field, enabling high-resolution medical imaging. But for a superconductor to function correctly it must be kept at ultra-low temperatures — which is where liquid helium is essential.

When a coil of wire is wound around a special superconducting material, then cooled to 4.2 K or less in liquid helium, the critical temperature condition is met and very high currents can be pumped into the coil. The largest stable magnetic field generated to date is by a hybrid, the 45 Tesla, or 450,000 Gauss, so-called Bitter superconducting magnet located in the US National High Magnetic Field Laboratory at the University of Florida. This magnet produces a magnetic field that’s 1.5 million times larger than the Earth’s magnetic field.

In our research we use NMR to fingerprint the physical properties of new material discoveries made in our laboratories. Some of these become drugs such as new antibiotics that address global health challenges, while others turn into “green” structural materials that can be readily recycled. Advances are being made in the energy sector, developing small, portable, high-energy batteries that may eventually reduce our reliance on carbon fuels. NMR, in turn, requires copious quantities of helium to function. This is unlikely to change any time soon.

Fortunately, we are becoming better stewards of our remaining reserves, we are finding new reserves all the time, we are learning how to recycle helium gas before it is lost in space and we are beginning to understand how to make new materials that superconduct at higher, more accessible temperatures. All of these developments take time and lots of money. And, unfortunately, recycling operations require a lot of energy and burn coal.

In the meantime, we will need to continue to find more sources of this precious resource and develop better strategies for recycling. We could take individual small steps in this direction by buying fewer party balloons. On the other hand, this is really a very small fraction of all the helium we consume and the sheer joy they provide is a small price to pay, I think. Just something to consider the next time you watch a party balloon sail its payload of helium into the great Cosmos.