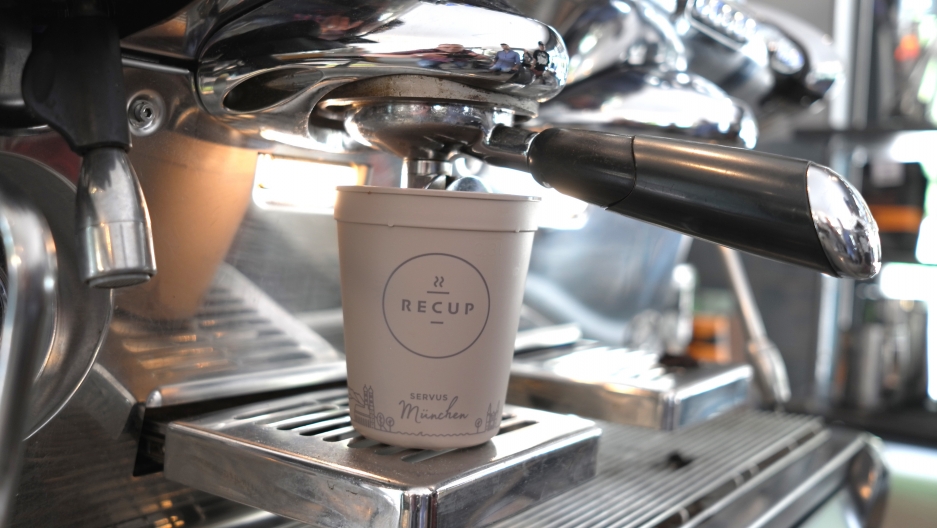 Munich-based Recup aims to make takeout coffee more sustainable, with a deposit system for reusable takeout cups that can be returned to a network of more than 1,000 coffee retailers across Germany.

It may be the biggest, but it's hardly the only coffee cup making headlines in this southern German city. Public trash bins are overflowing with single-use cups, the consequence of Germany's newly acquired taste for American-style takeout coffee, provoking headlines, hand-wringing and something of a national identity crisis.

Germany leads the world in recycling, but most paper coffee cups can't be recycled, and so like the rest of us, Germans just throw them away — nearly 3 billion every year. Munich, a city of 1.4 million, tosses 190,000 every day, enough to fill that extra-large inflatable latte with trash seven times a week. 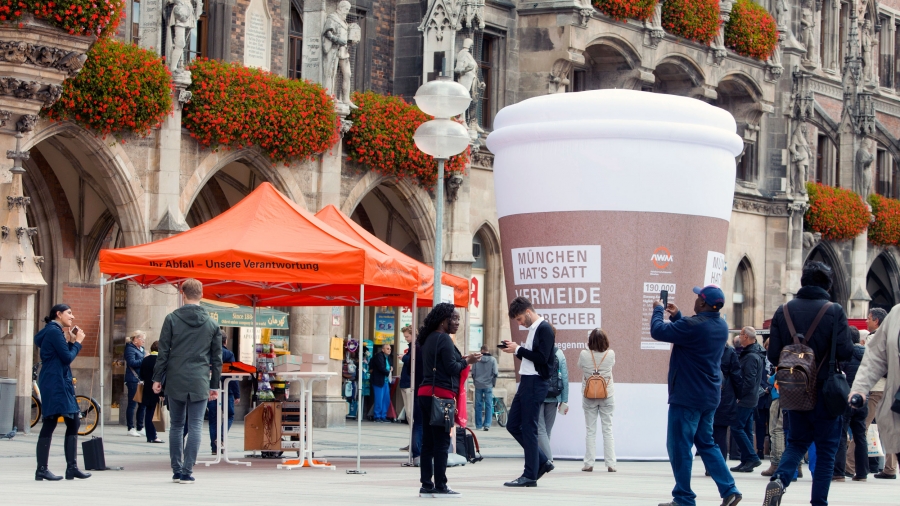 Munich's city waste and recycling authority is trying to raise public awareness about the volume of coffee cup waste with ongoing public display of a giant takeout cup, big enough to hold the nearly 200,000 cups the city tosses every day. On its side is printed, “Munich is fed up!”

“I think maybe it's an American way of life, which has spilled over to Germany or to Europe, and it's not the best way of American life,” says Guenther Langer, plant management director of the city waste and recycling authority AWM.

His agency served up the super-sized coffee cup as the public face of a multi-pronged campaign to get Munichers to rethink their coffee habits, and find solutions to the new, imported problem of coffee cup waste.

An inspiration for one possible solution has turned out to be right under Munich's nose — in a cold, foamy glass of the city's famous beer.

Before the takeout coffee craze, Munich's favorite beverage was decidedly of the hops-and-malt variety. Munich's thirsty state of Bavaria drinks more beer than nearly any other place in the world, but it's a habit that generates little, if any, waste, at least by consumers.

At retailers and take-out kiosks, festivals and biergartens, reusable beer bottles and real glasses are distributed through a Pfand, or deposit, system, in which consumers pony up for the receptacle and get their money back when they return it. Even the city's Oktoberfest, the world's biggest drinking festival, uses the deposit system. 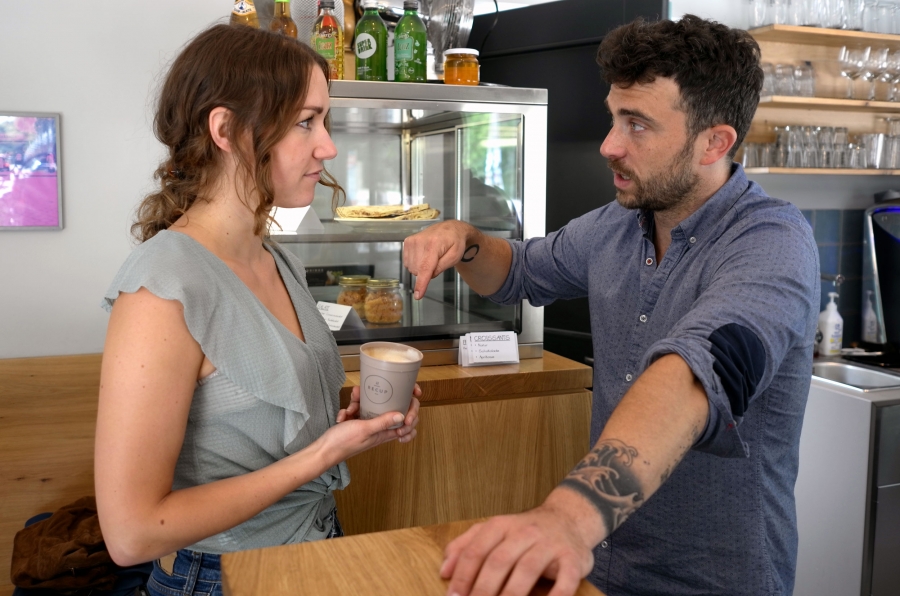 Alex Gerstmeier, left, of Recup, debates the finer points of sustainable lattes with Tim Allhoff, whose riverside cafe, Kiosk 1917, was an early adopter. Allhoff says more than half of his takeout coffee customers now use Recups.

The goal of all of Germany's deposit systems is to reduce waste. And that gave Munich startup Recup an idea.

Founded in 2016, Recup is a new deposit system that aims to replace throwaway coffee cups with reusable ones. The premise is just like that of a beer glass: You pay a deposit on the container, and when you bring it back, you get your money back, and the container gets washed and used again.

“The question is, why has it not been applied to coffee before?” says Alex Gerstmeier, Recup's marketing manager.

And so Recup finally has: At the more than 1,000 participating cafes in the Recup network, from Munich to Berlin, consumers can buy their to-go coffee in a heavy-duty plastic Recup in exchange for a 1 euro deposit. And just like with the beer mugs, when they return the cup at any location mapped on the Recup app, they get their deposit back and the Recup is washed and reused.

For Germans already accustomed to deposit systems, Recup shouldn't feel like a stretch, Gerstmeier says. But she hopes it has the potential to have a larger impact, too.

“It's a chance to change the way people think, just understanding that sustainability is not complex but you can implement it easily in your life if you allow for little changes,” she says.

Recups can be reused dozens of times, and the company has more than 350,000 in circulation so far. In theory, they've replaced millions of throwaway cups.

Of course, Recup has not yet saved the planet, or even Munich. Only a small fraction of the city's cafes offer Recups, and even there, not everyone is using them. Recup hasn't figured out how to wash lids well enough to reuse them safely, so patrons have to bring their own or take single-use ones and throw them away. And as giant as that giant latte is, coffee cups make up just a fraction of the city's overall waste.

But if Recup can’t solve the thorny problem of sustainability by itself, supporters say it still has the potential to be a potent symbol — a poster child for a culture of sustainability through sharing. That's why alongside that giant coffee cup, Munich's waste and recycling authority is promoting Recup as well, as a greener way to drink takeout coffee and a way to think about sustainability in general.

“Think about what you are doing, think about your lifestyle, try to relax, try to avoid waste, try to make your lifestyle more sustainable,” Langer says. “The multi-way cup is one small step.”

Because, as he points out, it's really about the coffee, not the cup. 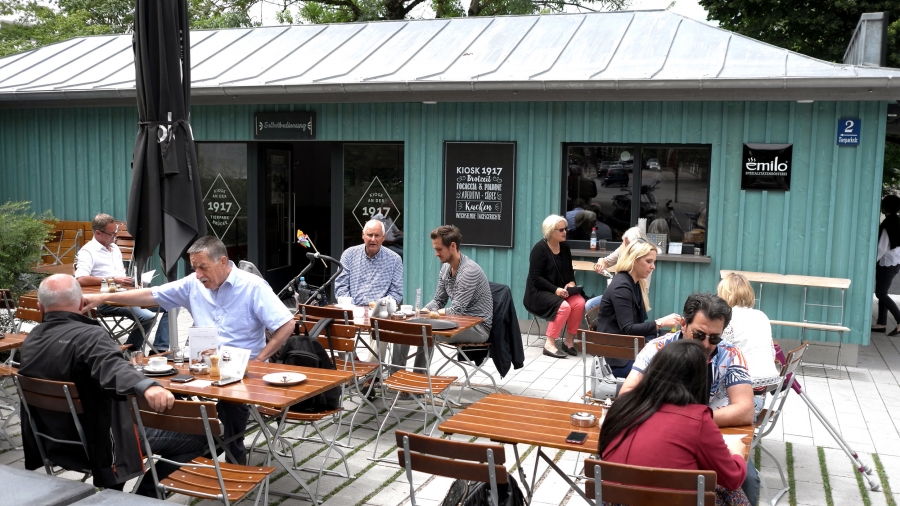 Many patrons at Kiosk 1917 are choosing to have their coffee to stay. Owner Tim Allhoff says half of his to-go customers use the Recup. Those that stay linger over their beverages in ceramic mugs. “It's just environmentally unsustainable and stupid to drink your coffee on the go or on the subway,” says customer Peter Trischberger. “I like to drink out of a real cup and have mine in peace, even if it's only for a few minutes.”