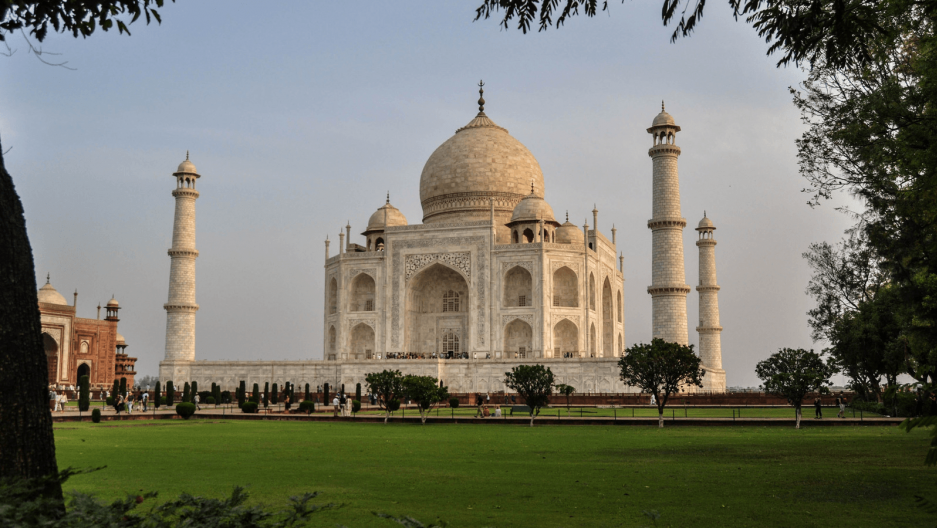 The Taj Mahal is one of the most famous buildings in the world. But it's in trouble. Over the past four centuries, the Taj has been drenched in acid rain, coated in soot from industrial and domestic chimneys, and eroded by atmospheric pollutants.

The saying goes that the Taj Mahal is pinkish in the morning, milky white in the evening and golden when the moon shines. Though this may once have been true for the famously pristine marble monument, a mixture of pollution and poor management has now burdened the Taj with a 24-hour layer of yellowy-brown. Condemning the “lethargy” of restoration efforts, India’s Supreme Court recently told the government to restore the Taj or demolish it.

Located in Agra, in the northern Indian state of Uttar Pradesh, the Taj Mahal is one of the most iconically beautiful buildings in the world. Built by Mughal Emperor Shah Jahan as a testament to his grief, following the death of his first wife Mumtaz Mahal, Rabindranath Tagore called it “a tear running down the cheek of time.”

The Taj was constructed of translucent white marble, brought to Agra from the northwest Indian region of Rajasthan. It was then inlaid with semiprecious stones, including jasper, jade, turquoise, lapis lazuli, sapphire and carnelian. The whole riverside complex, including the gardens and surrounding sandstone walls, was finished in 1653. 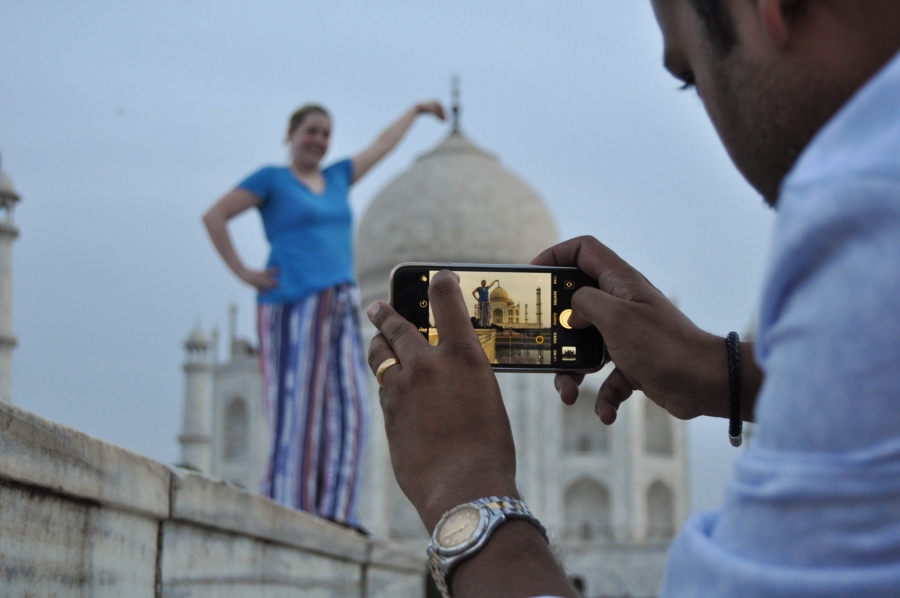 Audrey Hendrickson, from the US, poses in front of the Taj Mahal. On a busy day up to 70,000 tourists wander the grounds.

A mausoleum in need of new life

Over the last four centuries the Taj has aged and darkened as a result of natural oxidation processes — the marble equivalent of rust — but it has been given no help by its hostile surroundings. It has been drenched in acid rain, coated in soot from industrial and domestic chimneys and eroded by atmospheric pollutants.

Air pollution in Indian cities is legendary, and Agra is no exception. As in many Asian cities, increasing car ownership has caused traffic to surge, while dirty air seeps from Agra’s oil refinery and tannery chimneys. These pollutants — sulfur dioxide, Nox gases, and mainly carbon-based particulates — have steadily weathered and eroded the Taj’s brilliant white façade, giving it a yellow sheen. Despite the establishment of a 4,000-square-mile protective area around the site (the Taj Trapezium Zone), within which emissions are supposedly strictly controlled, photographs show a marked deterioration in the Taj’s condition over the last few years. 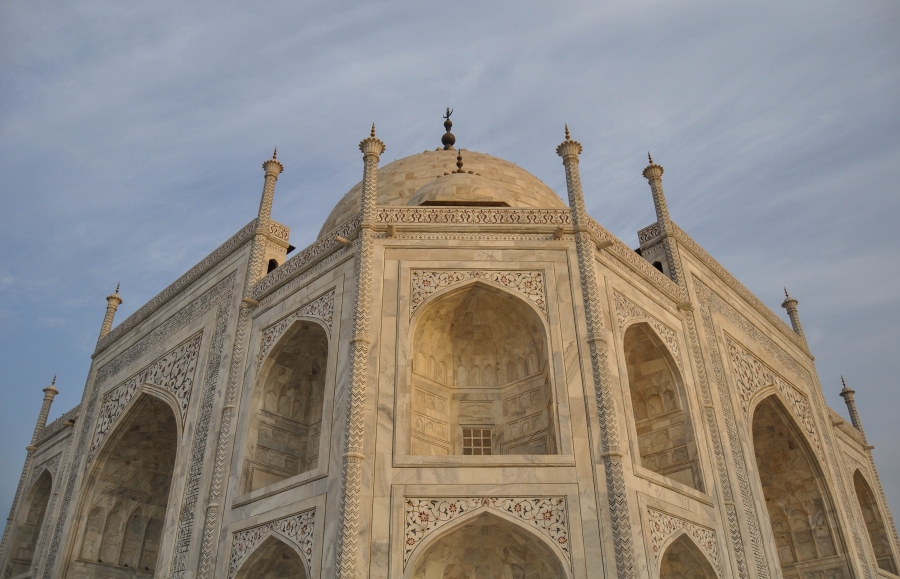 Once pristinely white, pollution has started to turn the Taj Mahal a yellowy-brown.

Legal emission limits have been long contested by developers and are widely ignored. Smoky funeral pyres are lit and piles of rubbish are regularly burned very close to the buildings. Pollution from the Yamuna River presents a further challenge. Untreated sewage and industrial waste pour in from the city, creating nutrient-rich waters. These nutrients are then picked up by the wind and deposited in the Taj’s increasingly porous stonework, allowing river-derived microorganisms to thrive on its surfaces, coloring them green.

Allegedly, excrement from the many insects that thrive in the contaminated river water has hastened the damage, but the effect is surely negligible compared to that of fossil fuel-derived sulfur dioxide and nitrogen dioxide.

Since 1998, a range of Indian research institutes have explored restoration methods, and millions have been spent trying to reverse the discoloration. One attempt involved smothering the Taj with damp clay poultices similar to face packs. It was hoped they would draw the damaging acids out of the surface layers of marble, but, if anything, they seem to have made the situation worse. 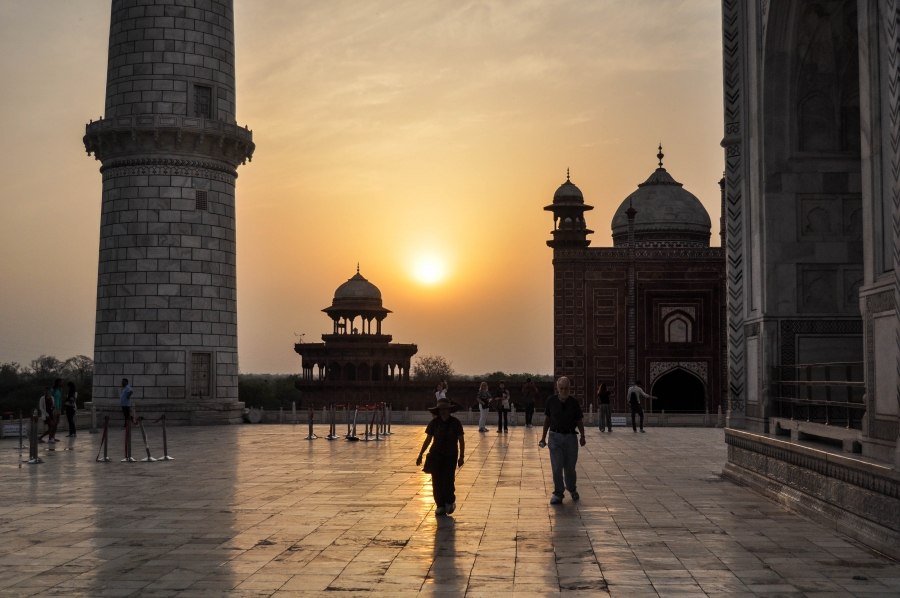 Sunrise at the Taj Mahal is an increasingly hazy affair. Many airborne contaminants originate in Agra, the city that surrounds the Taj.

A template for renewal

In London, some 50 years after the completion of the Taj Mahal, Sir Christopher Wren designed a structure of comparable ambition. St Paul’s Cathedral was finished around 1711, a resting place for the nation’s great and good, and was built from the light-colored, calcareous rock, Portland Stone.

St Paul’s has suffered many of the same problems as the Taj Mahal — acid rain, soot, atmospheric pollutants, darkening with age. But after 40 years of monitoring by teams of university geographers, employing scientific techniques such as repeated observation with microerosion meters, the extent of the weathering is far better understood

Older British readers may recall the infamous smogs that engulfed Britain’s cities in the 1940s and 50s. Four hundred years of coal-powered domestic heating, and latterly the fumes emanating from vehicles and coal-fired power stations, allowed sulfur dioxide and fine particles of carbon to reach toxic levels in London’s air.

On cold, still autumn evenings, dense chemical smog can do as much damage to calcareous or chalky stone as it can to people’s lungs. Combined with rainfall it creates weak sulfuric or nitric acid, which over centuries can erode calcareous stone. When St. Paul’s was closely examined in the 1980s, some of the parapets and carvings had crumbled away completely leaving stone surfaces held together by black sooty crusts, hiding the voids beneath.

The worst excesses of soot and sulfur dioxide have been curbed by environmental legislation, though the atmospheric nitrogen produced by traffic, particularly diesel vehicles, still causes problems. Like Agra, London regularly breaks the World Health Organisation limits on air pollution. 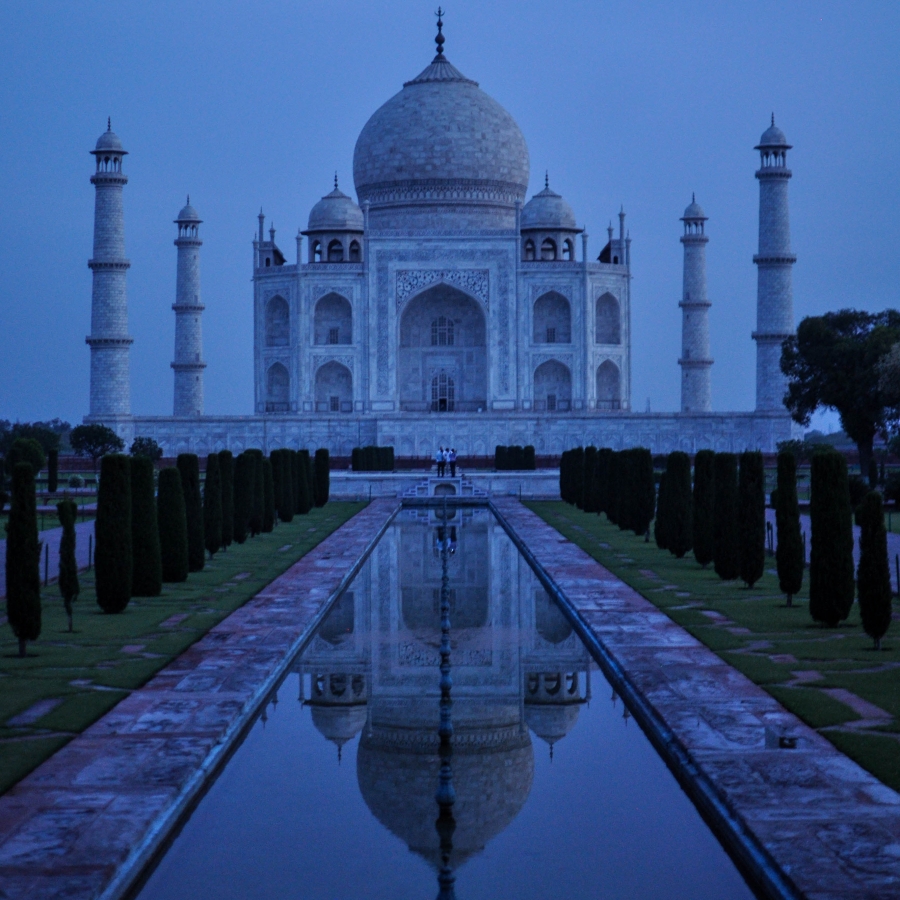 Condemning the “lethargy” of restoration efforts, India’s Supreme Court recently told the government to restore the Taj or demolish it.

However, the rate of weathering on St Paul’s seems to have halved with the fall in atmospheric sulfur dioxide. Concerns remain over microflora growing on stone surfaces, but sensitive cleaning and the odd replacement stone have largely protected Wren’s legacy. It remains to be seen whether the Taj can be similarly restored.

The Taj Mahal is a wonder of the modern world, but this national and international treasure needs swift and decisive action if it is not to lose its legendary luster.

Carolyn Roberts is an entrepreneur in residence at Mercia Centre for Innovation Leadership at Keele University.