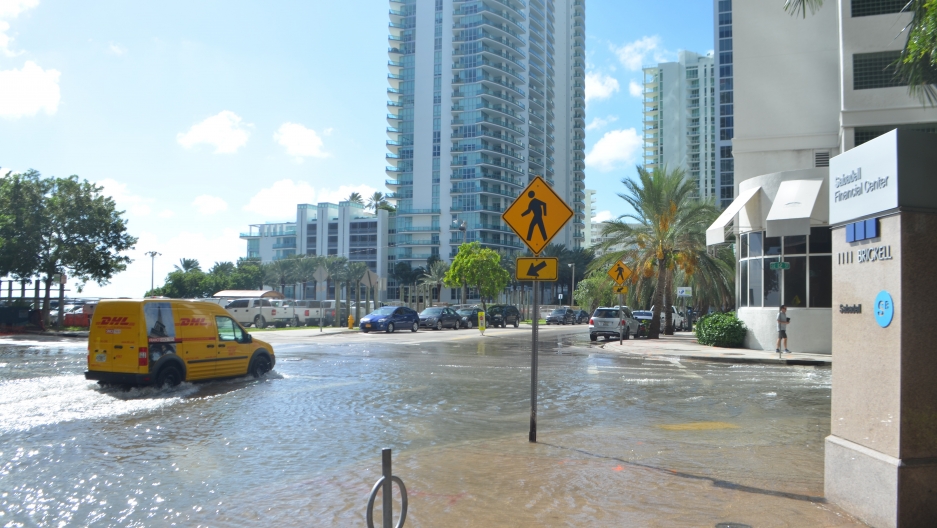 For the first time in a decade, a Republican member of Congress has introduced legislation to address carbon dioxide emissions.

On July 23, Republican Congressman Carlos Curbelo of Florida introduced the Market Choice Act, a carbon tax proposal to help fight climate change with a “tax swap.” The bill would eliminate the gasoline tax and replace it with a $24-per-ton tax on greenhouse gas emissions from oil refineries, coal mines and natural gas processing plants. The tax would increase by 2 percent annually, plus inflation.

Representative Curbelo unveiled his plan at the National Press Club. “At this time of deep political division and, at least some days, political chaos, I am offering this big, sober solution to address some of our country’s greatest challenges,” he said.

Estimates suggest the carbon tax would raise $1 trillion dollars over the next decade, with the bulk of that money going towards infrastructure improvements, something both Republicans and Democrats have said they support.

Curbelo acknowledged that a carbon tax might be a tough sell for some of his GOP colleagues, but he says it beats the alternative.

“I remind my conservative colleagues who often decry our nation’s growing debt: Saddling young Americans with a crushing environmental debt — meaning an unhealthy planet where life is less viable— is at least as immoral as leaving behind an unsustainable fiscal debt,” Curbelo stated. “Already my constituents in South Florida are experiencing the effects of higher sea levels with chronic coastal flooding and saltwater intrusion in the Everglades, which threatens our drinking water supply.”

Former South Carolina Representative Bob Inglis was the last Republican to introduce a bill to address climate change. It didn’t end well: Inglis introduced the bill in 2009 and was unseated by a Tea Party candidate in 2010. Inglis now directs the free-market environmental organization RepublicEn. He says Curbelo has come up with a “very creative idea.”

Inglis says the bill would result in dramatic reductions in greenhouse gases sufficient to meet or exceed commitments the US made as part of the Paris Climate Agreement. According to a Columbia University study, Inglis notes, as the tax increases to $50 per ton it would cut emissions 39 percent by 2030.

Inglis also likes the bill’s simplicity. “There are only about 2,000 companies in America that either mine coal or put stuff in a pipeline, so it’s a very simple job for the IRS and simple for us as consumers,” he explains.

In addition, he says, consumers will see the “true cost of energy,” and once they see that, they will be more likely to “turn the thermostat down or to insulate better or to get an electric car, or do something like that.”

Inglis doesn’t envision a positive response from Curbelo’s fellow Republicans in Congress. In fact, just days before Curbelo introduced his bill, 222 GOP representatives voted in favor of a resolution introduced by Representative Steve Scalise, a Republican from Lousiana, that declared any kind of carbon tax detrimental to the United States economy. Only six Republicans voted against the resolution.

He says: “It was a resolution in which Steve Scalise said, ‘There is this terrible, villainous carbon tax lurking out there that would increase the size of government [and] destroy American competitiveness.’ … But if we turn on the lights, what we see is a revenue-neutral, border-adjustable carbon tax. Revenue neutral means you cut taxes somewhere else or you dividend the money back or you eliminate the gas tax; border adjustable means you apply it to imports, so you get China and rest of the world in on the deal.”

Inglis does not expect to see action on Curbelo’s bill during this Congress, but he suggests Curbelo’s views may be the future: Curbelo represents Miami, a city that already has a problem with sea level rise, so he came forward with an innovative idea to address it.

“The great thing is that Carlos Curbelo is a young, smart conservative, and if you're young and smart and conservative, you're for action on climate change,” Inglis concludes.