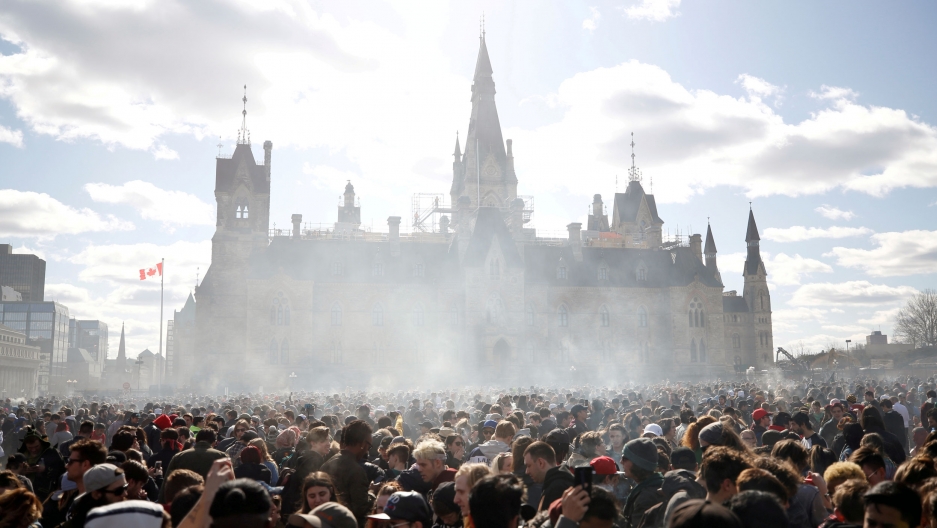 Smoke rises during the annual 4/20 marijuana rally on Parliament Hill in Ottawa, Ontario, Canada on April 20, 2018. Marijuana will become legal nationwide in the country on Oct. 17 and companies are beginning to create new products — like cannabis-infused beverages — for consumers.

Marijuana becomes legal Oct. 17 nationwide in Canada. Molson Coors is just the latest and one of the largest companies to announce it's creating a line of non-alcoholic cannabis-infused beverages to be sold in Canada. Terry Lake is the vice president of corporate responsibility for Hydropothecary, a Quebec-based marijuana producer.

Even though marijuana will be legal, edibles and drinkables will need to be regulated and consumers shouldn’t expect to see anything on shelves for another year.

The World: So what exactly is cannabis beer? How much marijuana content, how much alcohol content is in it?

Terry Lake: Well it's a really important question because a lot of people have confusion around this, Marco. There will be no alcohol in these cannabis-infused beverages. So, I think we need to make that clear right from the start. Where there may be drinks that taste like beer, like a dealcoholized beer. This will be a whole range of different beverages and cannabis will be the active ingredient. There won't be any alcohol there, so it's a new market in Canada. In fact, we are waiting for the government to approve regulations for edibles and drinkables and we expect that to come in 2019.

So for the product you're developing, after a couple of cans of the stuff, you won't feel tipsy but you will feel stoned? I know that's the thing everybody wants me to ask.

It goes back to our old sort of understanding — or perhaps, misunderstanding — of cannabis generally. There are different active ingredients in cannabis. THC is the one that most people associate with that feeling of getting high and it certainly is one that has the greatest psychoactive effects but there's also other cannabinoids, active ingredients as part of this amazing plant including CBD or cannabidiol and that is an ingredient that while it makes may make you feel a little uplifted, it's real effects are on reducing inflammation and reducing pain and modulating mood. So that really doesn't get you high in the sense that we're used to when we think of cannabis.

There are a whole range of other cannabinoids in cannabis including CBG, which is thought to have some perhaps appetite satiating properties. So these beverages could actually be a wide variety of different beverages for different purposes. There may be one that makes you feel, you know, put you in a good mood to listen to some music or watch an interesting movie. Others that are more of a wellness drink with the CBD, which will reduce inflammation and let you continue your running schedule or your old-time hockey league schedule as you age.

Again, a whole variety of different possibilities. It could be a beer taste in a dealcoholized beer. It could be a fruit flavor. We see in the United States, for instance, you've got drinks like Happy Apple in Washington State that are an apple-flavored cannabis-infused drink. It could be soda water. It could be coffee flavors. Really, it's limitless.

And what are you seeing in terms of beer sales right now in Canada?

Well we've seen a marked shift away from the mainstream breweries into craft breweries and in fact, many of the larger breweries, like Molson Coors Canada have, you know, picked up some of those craft brewers and added those craft products to their line of beverages because people, again, are more interested in the story. They want different kinds of flavors, different levels of alcohol content, different hoppiness. You know, people are a lot more sophisticated rather than buying the sort of five top brands of beer that used to be the case here in Canada, and I think in the United States as well.

How do you exactly make a cannabis-infused beverage? Is it similar to making beer?

Well, it's actually not as easy as it sounds because alcohol is water soluble so putting alcohol in a drink is relatively easy. But cannabis and the ingredients of cannabis are largely fat soluble, which means you need to have techniques in order to allow that active ingredient to stay in solution or at least suspended evenly in a drink. And there are proprietary technologies that are designed to do that. And that's something that we hope to bring to the table in this joint venture so that you will have a drink that you can't really taste the cannabis and you can't see any discoloration or any difference in the look of the beverage. It really will assume the taste and the look of the other components of the beverage.

What stores are going to sell your beverages? Liquor stores or pot shops or will you be able to get it at supermarkets?

So Oct. 17 is the date for Canada to have legalized marijuana. When will Canadians expect to see a Molson Coors cannabis beverage on store shelves?

Well, the cannabis act, which is the legislation passed by the Parliament of Canada, says that within a year the edibles and concentrates need to be brought into the regulation and so we are hopeful that in September of 2019 we will see cannabis-infused beverages. Our goal in our new joint venture will be to have those products available on the first day that they can be sold.

Say like five years from now, do you think it's going to be pretty typical for Canadians on their way home from work on a Friday afternoon to stop by a store and pick up a six pack of cannabis beer?

I don't think it will be unusual. I don't think the cannabis-infused beverages will replace beer. I know that a great IPA is still my drink of choice, so I can't say that it will replace beer but it will certainly for some people be a substitute, something that they have as well as drinking alcoholic beverages at other times. We don't recommend drinking the two together but you know I think it's just another choice. People are getting more sophisticated and as I said, the stigma around cannabis here in Canada is dropping rapidly and I think it's going to be widely accepted.