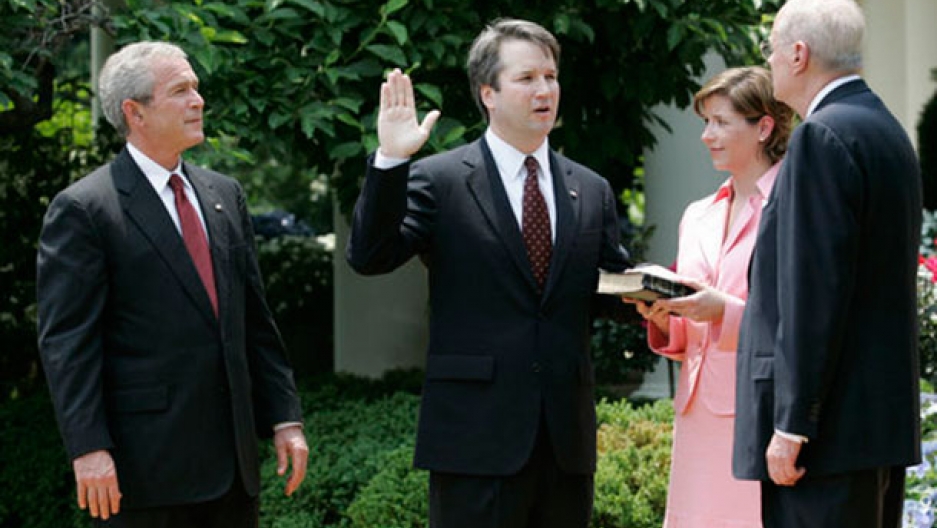 Judge Brett Kavanaugh with former President George W. Bush and Supreme Court Justice Anthony Kennedy. Kavanaugh was a law clerk for Justice Kennedy and has been a judge on the DC Circuit Court of Appeals since 2006.

President Trump’s nomination of Judge Brett Kavanaugh to replace retiring US Supreme Court Justice Anthony Kennedy is causing great concern for those who believe the US government has an obligation to protect the environment and public health.

Parenteau believes that of the four judges known to have been on Trump’s shortlist to replace Kennedy, Kavanaugh is “probably the worst pick of the four” from an environmental standpoint.

“When it comes to environmental law, the other three names on that list did not have much of a track record to begin with and might actually have been more open to seeing that environmental law oftentimes [requires] federal regulation — and this is something that Brett Kavanaugh has been very skeptical about over his career,” Parenteau says.

Parenteau points to the EPA’s mercury rule as an example of a law that would be expensive for industry to implement yet would be enormously beneficial to public health. When the rule came before the DC Circuit court, he says, Kavanaugh wanted EPA to justify the rule with more economic data weighing those benefits against the costs. The mercury rule was upheld by the Supreme Court.

The same thing happened with President Barack Obama’s Clean Power Plan, which sought to regulate greenhouse gas emissions. The United States Court of Appeals for the District of Columbia heard arguments challenging the Clean Power Plan and, in an unusual move, chose to put implementation of the rule on hold until lower courts ruled on its legality. “Kavanaugh, during the oral argument, was one of the few judges to express serious doubt about whether the courts should be involved in making policy on climate change,” Parenteau says.

“His point is, it's up to Congress to do it, not the courts,” Parenteau explains. “My view is the courts do have a role in this process. He says courts are required to interpret the law, not make the law. That's a little disingenuous, frankly. When you look at the language of a statute, which is written very generally and often very ambiguously and is subject to many different interpretations, the court is actually making a choice as to how to interpret the law and by making that choice they are making law.”

Parenteau fears that Kavanaugh replacing Kennedy could adversely affect one of the major environment and public health decisions of recent times, Massachusetts v. EPA, in which Kennedy was the critical fifth vote in favor of a ruling that "EPA not only had the authority to regulate carbon pollution under the Clean Air Act, but it had the duty to do so once a determination had been made that carbon pollution threatens public health and welfare — which, of course, it does," Parenteau says. "There’s no question about that.

"With Kennedy gone and with Kavanaugh replacing him, there's a very real risk that the Massachusetts v. EPA precedent, the most important single judicial decision we have on climate change, could be subject to either being overruled or greatly modified," Parenteau believes.

This could easily happen because Andrew Wheeler, who replaced Scott Pruitt as EPA Administrator, is likely to continue Pruitt's mission to adopt a Clean Power Plan “that is so weak it's almost laughable,” Parenteau says. That plan will certainly be challenged in court by many of the states and environmental groups that are pressing for stronger climate change regulations and that case will reach the Supreme Court, Parenteau explains.

“So, Kavanaugh and [recently appointed Justice] Neil Gorsuch are now in a position, with the other conservatives on the court, to rule in a way that basically could close the door to meaningful regulation of carbon pollution under the Clean Air Act,” he says.